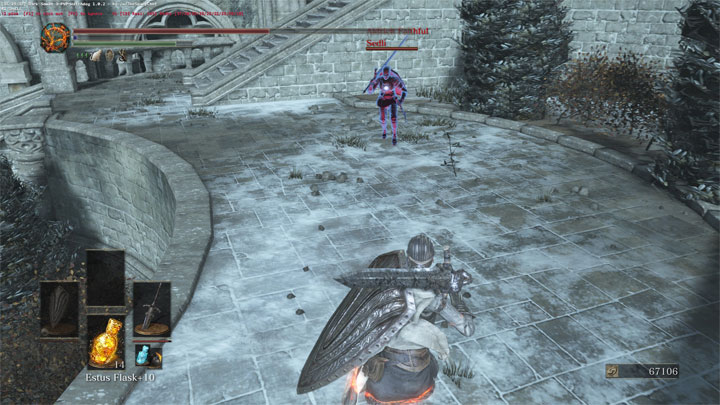 This is a port of the original Dark Souls PvP Watchdog made by /u/eur0pa with additions made by /u/TheSpicyChef? and myself (/u/LukeYui?). The aim is to bring something to Dark Souls 3 that will mitigate 90% of what cheaters can do. For the remaining 10%, it will back up your save game every time a session is made so that your progress is protected.

Note: This mod is incompatible with most other mods, it will not work with pirated copies of the game.

If you're enjoying this mod, and wish to support myself and TheSpicyChef, you can buy us a coffee here. (Please let me know that it is for watchdog)

What does it do?

This tool aims to identify cheaters and mitigate the impact they have on your online play, through a few different methods:

Detecting stat and level abnormalities of people in your session, allowing you to remove the player with cheated stats or disconnect.

Preventing dangerous effects (such as curse) being applied to you by other players.

Preventing a wide range of exploits, including multiple crashes.

Blocking invalid items from being picked up, or being given directly to you. (a.k.a "Item Inject")

Allowing you to reconnect to the game server after an frame-rate disconnection, without having to reset.

If enabled, it can autokick detected cheaters when hosting.

If enabled, it can backup saves every time a new session is established and store a set amount of backups before deleting the oldest.

It will detect known cheaters using alt accounts and flag them preemptively.

It will flag alternate accounts of people you have blocked

In addition to this, if you use the overlay, it will display the other players in the session, along with their steam profile names. For more details on what Watchdog does in the background, see below:

Invalid items cannot be dropped to you, or given directly to you.

Fixed a crash, and an exploit involving a type of world flag packet

Fixed an exploit that allowed players to apply effects to you (a.k.a "Autopilot")

Flags in watchdog appear when a player is suspected of cheating, these include:

"Invalid stats" - These players have manually changed their stats with an external program to gain an advantage in PvP.

"Fake stats" - These players' stats do add up, but they have still changed them (e.g. 0 faith, more strength)

"Out of bounds" - These players have left the current map, and are usually teleporting around

"Blocked alt" - Players who you have blocked, but have made an alternate account to get around the block

"Malicious" - Players who have actively attempted to perform certain cheats in your session.

Below is an example of what a flagged player would look like on the overlay.

Watchdog will automatically back-up save files when you start a session (begin an invasion, or be invaded). These files are stored in:

You can get here quickly by using the windows search tool for "%appdata%" and selecting the "DarkSoulsIII" folder. You'll find your save backups here with the .bak extension. To restore a backup, close the game and delete your current save (e.g. DS30000.sl2) and rename the backup you'd like to restore as DS30000.sl2.

This tool cannot give a soft-ban by itself, the reason this is so delayed in its release is that the game's anti-cheat had to be disabled, and a new one implemented so that Watchdog was tolerated but did not benefit cheaters. It has been tested extensively and used for many months and no bans have occurred.

Edit DS3PWSettings.ini to your liking - lines starting with ; describe what each setting does (this is best viewed in Notepad++)

Play Dark Souls III unfettered by cheaters. Or at least, much less than before.

To uninstall the mod, you just have to remove these files, or if you just want a temporary uninstall, rename "d3d11.dll" to something like "d3d11watchdog.dll", then change it back when you want to use it again.

Q) I've found a bug with the current release, can I report this?

A) Of course! Both this mod page and the page on the GitHub are monitored regularly, and any bugs reported will be looked into a patched for the next release.

Q) I know of / have been effected by a cheat that wasn't detected by Watchdog, can I report this?

A) We're always looking to improve Watchdog, and we can't do this without the help of the community; Please let us know and we'll look into it for later versions. (Versions 1.0.6+ have an error handler built-in -- Please send us your log with the crash details in it)

Q) Won't this tool be beneficial for cheaters, or give an advantage in PvP?

Q) I have a question not answered here or in the GitHub link.

A) If you need more information, or wish to report a bug, have a suggestion etc. please make a post about it, or send me a direct message.

Q) Can we see the source code?

A) No, while I understand people can be distrustful of mods like this, we cannot make the source code public. The reason for this is, as it is effectively an anti-cheat, releasing the source would make it easy for cheaters to attempt to bypass watchdog, or extract the anti-cheat bypass for themselves.