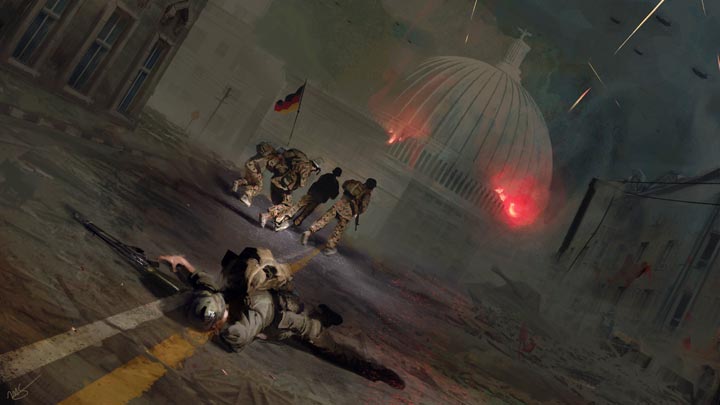 The New Order: Old World Blues is a mod for Hearts of Iron IV, created by Panzer's stuff.

The New Order: Last Days of Europe is an ambitious mod for Hearts of Iron IV presenting a unique alternate history Cold War between Germany, Japan and the USA, starting in 1962. Will you save the world or help destroy it?

Play as the noble Ural Guard, the proud communes of Orenburg, the dastardly Dirlewanger Brigade, or the scheming Lysenko of Magnitogorsk in this exciting demo from the New Order team!

The year is 1962, and Europe rests under the jackboot.

World War II has been over for twenty years, but its legacy still lives on. The German Reich reigns supreme from the Atlantic sea to the once great city of Moscow, ruling Europe with an iron fist. Thousands live and die every day under German tyranny, yearning for a freedom that may never come.

But all is not well in the Reich.

Hitler lays on his deathbed even as the first German raumsonaut lands on the moon, and already the vultures pick at his corpse. Albert Speer, Martin Bormann, Hermann Göring and Reinhard Heydrich each prepare to take power in the Reich, and the world waits with baited breath for the storm that is surely coming. Outside of the Reichstag in the supercity of Germania, partisans prepare for their final struggle, and Heinrich Himmler plots to bring the world to the edge from his spartanist utopia in the Ordenstaat of Burgundy.

Across the seas, the United States gathers allies to prevent the fall of democracy in the world, struggling to contain its own politics long enough to tear up the treaties that had ended the second World War. In Asia, the Japanese Empire groans under the weight of rivals within as well as without, as a hundred different cultures struggle and year for their own freedoms.

The world seems to be on the brink. Will it survive to see a new millennium, or is this the beginning of the end?

The year is 1962, and the world sits on the edge of destruction.

The New Order: Old World Blues is a demo for the Hearts of Iron IV mod, The New Order: Last Days of Europe. This demo contains the following features, a small taste of what is to come in the final game:

This demo is just a glimmer of the future, a thank you note and love letter to all of those who have followed our project so eagerly for the last five years of development. The New Order: Last Days of Europe is one of the most ambitious mods for Hearts of Iron IV ever created, and on release you will be able to experience:

To install the mod, simply unzip the folder and move both the folder and the .mod into your C:\Users\\Documents\Paradox Interactive\Hearts of Iron IV\mod folder. Enjoy!