John Wick sets off to war with the underground world of criminals and thugs. And although both films from that franchise were totally over-the-top, they were always done with some sensitivity and in a convention of a hangman's joke told with a poker face. But there are some directors, who set off to war with something more. With logic, laws of physics, and moderation.

Usually the effect is just a bad scene, but sometimes... Sometimes the context, the delivery and turgidity turn the bastard child of adrenaline rush and wild imagination into a spectacular, bombastic excess, which forever lingers within our memory. It teaches nothing, is fun as hell, and makes you plead: Why? Oh, why did I see it?

We don't know the answer. Were happy to tell you where to start looking, though. Get ready for a journey full of the familiar and the exotic. This is a journey to the fringe of imagination  be warned, though: anyone who dares cross it, will never be the same.

THERE'S MORE TO IT THAN THAT

The text barely touches on the subject. We assure you that if you search well, you will find more. There are many more examples at least as absurd as these. If you think that one of them should be mentioned here, do not hesitate to write about it in the comments.

We promised an expedition to the land of exotic madness and this is the first stop. Sometimes, it's not just artificial intelligence that gets out of hand. In many cases, it's the creator's imagination, too. The result could be, for example, a giant made of joined cyborg replicant bodies who wear the face of one of the main characters. The authors of Enthiran probably took the philosophy behind the success of the Transformers a bit too literally. I assume that when someone pointed out that its impossible repeat such success with a budget ten times smaller, the only possible answer must have been "Hold my lhassi and watch this, boi."

It's a science fiction movie straight from Bollywood. It depicts a story about a scientist who created an android copy of himself. In general, the machine was supposed to help humanity, but it assimilated so much of human impurities, including emotional filth, that it decided to solve our problems in a rather radical way... 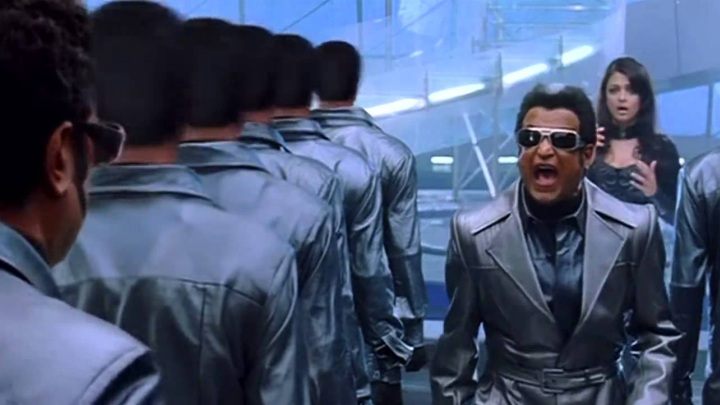 Is it worth watching the whole movie?

I think yes! Give it a try. Its kitsch, exaggeration and typical Indian cinema mannerism (no dancing, though), but it touches on some interesting topics, and if youre out form barmy scenes, this movie is a bonanza.

What about sales and money?

With a budget of about $28 million, the film earned almost $55 million  so it turned out a moderate success in the perspective of project's scale.