Earlier this year, industry media took a closer look at the condition of Cyberpunk 2077 by analyzing the player counter and the game reviews on Steam. There was a lot of disappointment, especially in the context of a rapidly decreasing player base. The game has seen a decline of about 80% players compared to the post-launch period. If we take a look at the statistics of the Valve platform, we can see that more people are playing The Witcher 3, a game thats almost six-year-old, than the latest Cyberpunk 2077.

Especially the last revelation makes the situation of CDPR's latest game rather depressing. Imagine an operating system manufacturer who develops a new version of its flagship product, spends a ton of money on advertising and then watches everyone opt to stay with the previous product  it's pretty much the same with Cyberpunk 2077, and it seems similar to the case of Windows Vista, or Windows 8. So... does it all mean that The Witcher 3 is still the best? Is it normal for gamers to prefer an older, seemingly tried and tested title over a new adventure? As usual, the devils in the details and such direct comparisons are not always completely reliable, especially with such large time differences and diametrically opposed game themes. 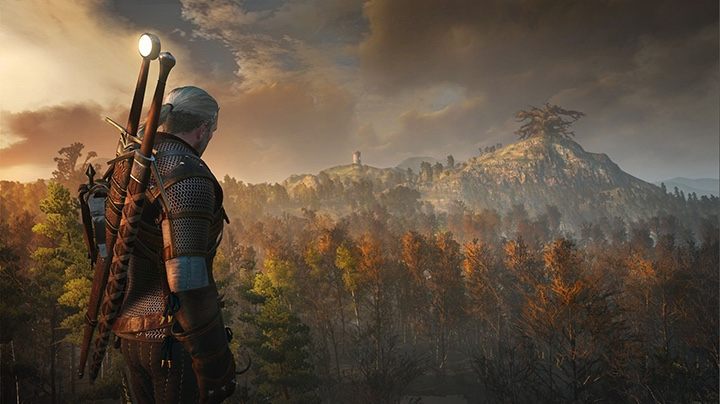 Three witchers are better than 2077 Cyberpunks!

TOO BAD THERE'S NO GOG

For obvious reasons, all considerations in this article are based on data from Steam, whereas it needs to be emphasized that GOG still engages a sizable player base for both The Witcher 3 and Cyberpunk 2077, let alone the console versions. However, it is safe to assume that the declines on these platforms are also significant and the arguments cited here apply not only to Steam, but to the rest as well. The bottom line is that the two games were distributed very similarly, so there shouldn't be any major differences affecting this comparison.

It gets quite convoluted already when analyzing bare numbers. In fact, the latest charts from Steam Charts show that Cyberpunk 2077 was played by about 20,000 players at peak, and The Witcher 3 by about 26,000 players. However, we have to remember how old the latter game is. After all, six years on the market has translated into numerous sales, and thus the opportunity to buy a copy at a low price by many players. The game has already been adequately patched, not to mention a huge number of mods that encourage replaying the game, making playthroughs more interesting each time. So it would be reasonable to check how many people played The Witcher four months after its release, in September 2015  and here, the data shows only 13,000.

So, is Cyberpunk still superior? Well, not exactly... 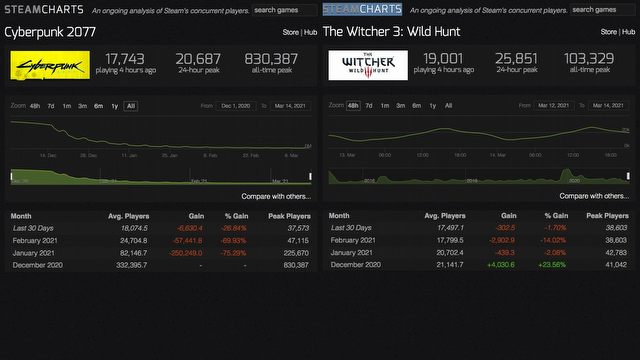 CDPR's new production launched on Steam with an exorbitant number of almost one million concurrent players, while The Wild Hunt was barely approaching 100k during the launch period. The number of copies sold was also incomparable during the release periods and there is every indication that Cyberpunk could outdo The Witcher in this regard even with its current sales statistics. This suggests that, in terms of proportions, Cyberpunk has lost incomparably more  if you start off with such impressive player base, you'd expect slightly better results today. So, why such decline?

One obvious reason for the low number of players is the abysmal technical condition of the game and the constant wait for more serious patches. We learned in late February that the massive 1.2 update would be delayed until March and we're still waiting for it. It's mainly old-gen console users who are waiting, but many PC gamers are also looking forward to playing a game devoid of so many glitches and with slightly better optimization as well, because a statistical Steam user doesn't have the newest hardware, and even if they wanted to upgrade it now because of Cyberpunk, the situation on the hardware market makes it virtually impossible. Once the patch is released, we hope to see a huge jump in the number of players logging back into the game. 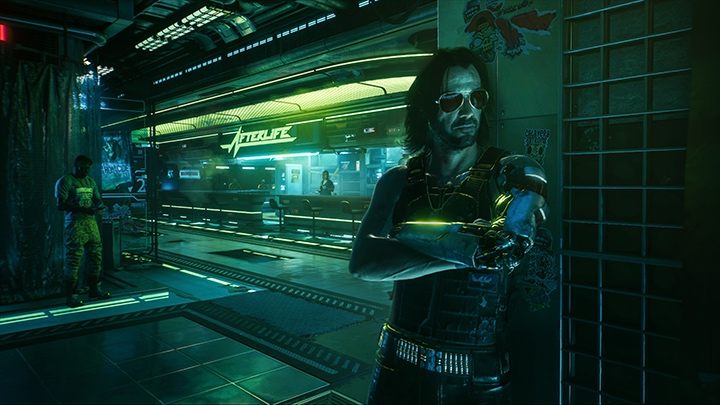 Cyberpunk is still a game waiting for the right patches, but it also takes less time to complete it and, so far, there's not so much interesting mods.

Another reason for the current decline in interest in Cyberpunk 2077 is the length of the main storyline, which is intentionally shorter than the story of the Wild Hunt. It can be assumed that some players who have purchased a copy have already finished the game and if they return to it at all, it will be after the release of the first expansions or even later, to refresh the story and possibly try other paths.

The quantity and quality of mods also seem to play a considerable role. At this point, Cyberpunk is no match for The Witcher, which has been on the market for almost 6 years. Fans of the much-loved modifications that add variety to RPG replayability have to settle for a slightly smaller selection for now, which means there are certainly less players seriously keen on playing the game.

What remains open for discussion is the somewhat more subjective and abstract issue of the popularity and appeal of the two universes. Nowadays, there is generally more appreciation for fantasy than science fiction or cyberpunk, which itself is a niche within SF. There are many reasons for that. First of all, we live in an age where we are surrounded by smart gadgets, able to access high-quality pictures from Mars. Under such circumstances, the world of the future, the world of SF, no longer provides an escape from everyday life and is presumably not as appealing as it was a long time ago. 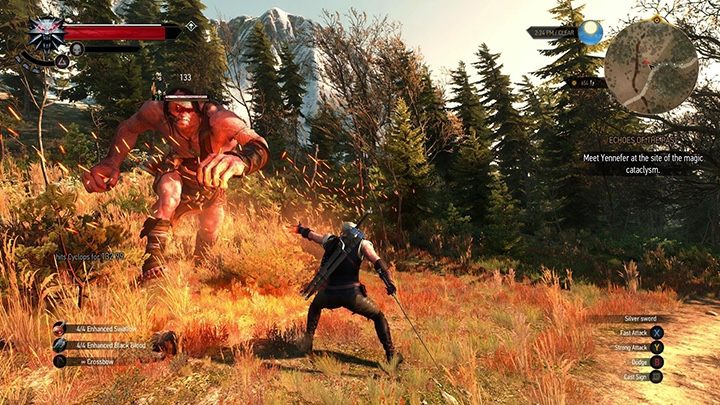 The fantasy world of The Witcher is generally more interesting and approachable.

Instead, the magical atmosphere of fantasy with its references to history and folklore seems more interesting. It's a world that builds on what we know well (childhood fairy tales) and which is much more semplice regardless of our age. Fantasy stories with the immortal motif of a warrior fighting with magic and sword against an ancient evil are easier to create and follow compared to futuristic SF, where the presence of various technologies requires a bit more logical thinking and knowledge. So if one wants to relax and faces a choice between The Witcher and Cyberpunk, many people might reach for the good old fantasy. 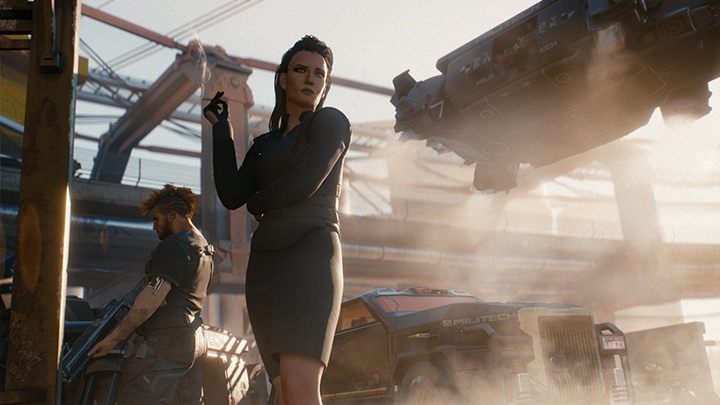 We're waiting for Cyberpunk 2077 to get back on track.

Most of these arguments should bear little meaning for the team responsible for Cyberpunk 2077. After all, they have only one goal  to make as many people as possible eager to purchase the game, keep coming back to it, finish it, and play it again. So we're waiting for patches that will finally allow us to enjoy the game without having to deal with its poor technical condition. We are also looking forward to the game's return to Sony consoles. And we're looking forward even more to the story expansions so that we can revisit the world of Cyberpunk and complete even more interesting quests. The developers are probably waiting for the player base charts to go up again, higher than those for The Witcher. So we all have something to look forward to  let's hope it doesn't take too long!