The last couple of months were definitely not the most outstanding period for the king of the hack and slash genre. Even the recent Darkening of Tristram didn’t manage to defuse the midlife crisis of Diablo III. The special event was the 20th-anniversary tribute to the original Diablo. The idea itself was great, but the execution wasn’t; the trite locations of Diablo III were mere imitations of the Cathedral, the Catacombs or the Caves from the first game and to top it off, the visual layer left a lot to be desired.

Hence it might have been a good decision that The Darkening of Tristram will be online for only one month. Nevertheless, the 2.4.3 patch, which was part of that event, brought some noticeable changes – dyes can no longer be stored in chests, as painting the equipment became another service of the Mystic; five chances were given to upgrade a legendary gem after a Greater Rift run. This article, however, will focus solely on the future of Blizzard’s hip (until recently) title, and more precisely, on the 2.5.0 update. 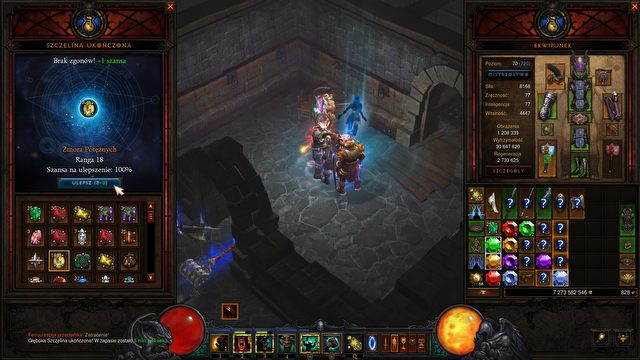 The new update focuses on polishing the existing solutions and creating an impression of introducing new quality. The new type of legendary equipment seems to be at the spotlight of this patch. We’re talking about primal ancient items – in theory even more powerful than the current variation of ancient legendaries (as well as sets). Of course, the chances of finding such items are remote at best, but it’s quite obvious if you consider the stats of these: 30% increase of base and unique attributes.

OK, so we’ll get even more powerful swords, axes, armors and helmets. The point of introducing new, better equipment is, however, questionable. We already have one type of legendary items, and every player who plans on achieving high scores in Greater Rifts doesn’t care than much about “regular” legendary items, since their ancient counterparts are much more desirable. Introducing another variety of legendary items will only further diminish the importance of the already-existing varieties.

This situation prompts one conclusion, and it’s that Blizzard is suffering from a deficit of new solutions that could diversify the most difficult challenges – for some players, finishing the 90th level of a Greater Rift isn’t the ultimate frontier of their skills; in fact, it only whets their appetite for adventure. 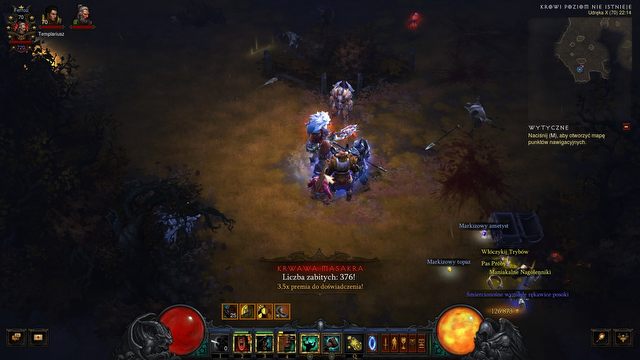 Naturally, the primal ancient items include – as in the case of the “regular” ancient equipment introduced earlier – all the gear available in the game, including sets. What that means in practice is that the border of endgame in Diablo III has been – once again – pushed further away, in order to compel the most dedicated enthusiasts of the franchise to spend even more hours scavenging the Sanctuary, with the goal of equipping their avatars with primal ancient items. This is the only thing that will bring the players closer to the most advanced levels in the Greater Rifts.

The thing is that the changes that Blizzard introduces aren’t really upgrades. Quite the contrary, in fact, since they (as do in fact the Seasons) further reinforce the impression that Diablo III is almost solely about the Greater Rifts. This happens in spite of the fact that the Rifts are only a fraction of this extraordinary game. And what about rare and magical items? They might seem redundant in the current situation, and not without a reason. Sure, some recipes in the Kanai’s Cube are no good until you have the yellow stuff. Starting a new season by definition requires players to use magical or rare items during the initial hours. “Keep calm and wait for Haedrig’s Gift” is the rule of the day. The instance we get legendary equipment, we’re back to the same old.

Can anyone remember Diablo III before the 2.0 patch? Do you remember the times when finding at least one legendary item (let alone the whole set) in the Sanctuary was regarded as an actual miracle? Of course, there was a catch to that too – the infamous Auction House. Apart from that, each of the five classes (the Crusader was only added in the Reaper of Souls) had its optimal build (the Wizard had two), which was based on – oh, my mistress irony – dedicated legendary sets. The only viable way of obtaining the full set was by paying a visit to the Auction House. 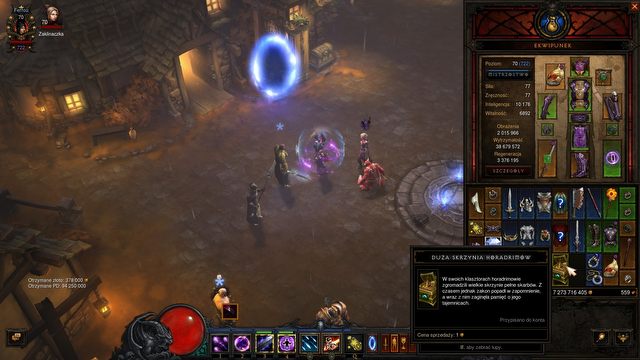 Most of the players back then were able to manage without a full legendary set. People simply used magical or rare items. Furthermore, you could also trade in Diablo III – either by means of the auction platform, or in the game itself. The piles of loot collected from defeated enemies were actually useful. Today, the crushing majority of the drop (which is largely composed of legendary items), has to be melted down at the balcksmith’s. Whether or not the old mechanics in this regard made Diablo III a better game is up for discussion.

The fact is that the best equipment – i.e. the legendary items – were devaluated. Numerous factors are responsible; starting from increased chances of finding or dropping legendary items, and ending on the capabilities of Kanai’s Cube or the services of the Mystic. The only thing prompted by the avalanche of legendary toys dropped from enemies was a prolonged yawn. The truth is that another portion of legendary items, this time labelled as primal ancient, is not a solution at all. What’s up next? Ancient primal prenatal antediluvian Tal Rasha’s set?

You know what they say about the best intentions…

Another novelty brought by the 2.5.0 patch is the Armory. The Armory takes the shape of a big wardrobe, and is located in every city. It also allows the player to save five configurations of items within one class. Considering the number of different epic sets and the sheer plethora of legendary items, this idea is extremely practical. The devil’s in the details, though, and the details are as follows: the sets from the armory aren’t saved for individual Battle.net accounts, but for individual characters instead. 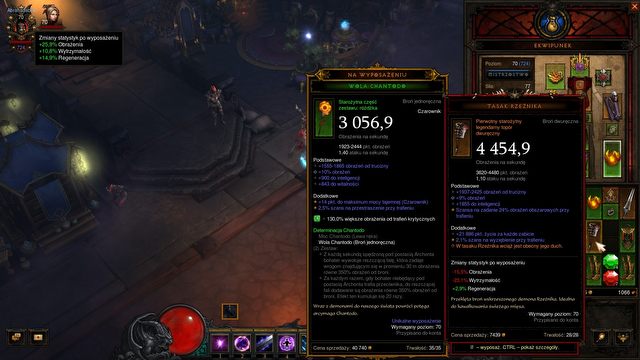 Let’s consider a scenario in which we play with four wizards. Let’s imagine they use the Tal Rasha, Firebird, Opus Magnum Delsere and Vyra’s sets. Now, we could have just take each of them to the armory and save their sets, but Blizzard had a different idea, which, in my humble opinion, is thoroughly impractical. After saving the set for the wizard in Tal Rasha’s kit, you have to change her gear for the Firebird, and then subsequently any other set you’re interested in saving. I find this solution very irritating.

Of course if you have a character that uses a specific legendary set, you will be looking to expand this particular set with items that have even better stats – you stay within the same build the whole time, however. Why should a Barbarian that uses the Immortal King’s set complete the Wrath of the Wastes set, right? So, if you want to change your character’s set with one click – you’re more than welcome to. Just remember that the items are not interchangeable within your Battle.net account – two characters of the same class need to complete all sets separately. 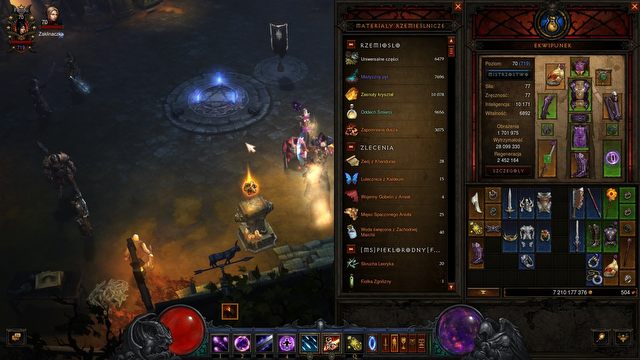 Apart from that, the Armory can only save the configuration of the gear. There’s no way of saving the allocation of the paragon points for any given character, and this is a factor that varies from hero to hero. Besides, it could also happen that a certain build within a given class requires more vitality, and the other – more strength. Long story short: the Armory – which was supposed to be a place to quickly juggle the hero set-ups, is not very ergonomic.

Cosmetics, or the final nail to the coffin

A breath of fresh air reached the crafting mechanics’ department. The Mystical Dust, Death’s Breath, Leoric’s Regret and other such materials have all been moved from the stash, just like the dyes, making a lot of invaluable space there. The crafting materials can now be looked up via a special icon in the inventory. Since we’re talking about crafting – Blizzard has removed the bonus acts altogether – now, after finishing five bounties in any act, the player will be awarded a Large Horadric Chest, the content of which is analogical to the Horadric and Bonus Caches. 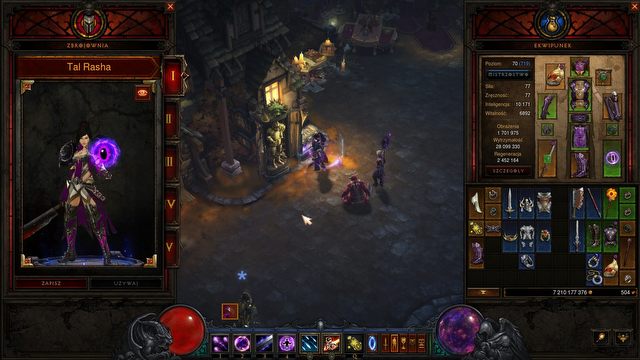 As in the case of almost every recent updates of this great title, the devs either can’t see or don’t want to see the problems that are really plaguing it. Simply increasing the power of a couple of items is just lazy developing, and it sure won’t bring Diablo III’s glory back. Dealing more damage makes no difference if the mechanics are substantially the same. Mowing down enemies on Torment XIII (the highest difficulty level in the game) is so uncompelling – even without the new type of legendary items – that it evokes morning groceries more than fighting the devil himself.

Hunting the famous ubers single-handedly takes a couple dozen minutes tops. The adventure mode is almost entirely neglected. There are no solutions to the problem of utterly useless rare and magical items. People seem to have forgotten the campaign. Nephalem Rifts are only an unpleasant obstacle separating players from the only formidable challenge – the Greater Rifts. The game is marked by a terrible atmosphere of monotony. The elephant is officially in the room, people. The bottom line is that the recent updates have all misfired; we’d almost be better off without them. I’m not happy to be writing this, but even the announced cult Necromancer class cannot change anything now.

I’ve been playing Diablo III since it was released – the counter indicates around 2400 hours. What have I accomplished in the game? I think the greatest token of my dedication is just that – the amount of time I’ve spent with D3. I’ve seen the game’s ups and downs; I’ve witnessed the whole of the long, satisfying, illogical and exhausting road the game has come since May 15, 2012.

My score thanks to achievements is currently at 5180 points. I don’t care much about them, just like I’m not interested in the seasons. I participated actively in three and a half of them, which exhausted my capacity for this sort of thing. I’ve never believed that “the real Diablo ended with Diablo II”.

I know the series since the very beginning of it, and I think that each installment was unique and original.