The beginning of our adventure in Assassin's Creed: Valhalla includes, among other things, a visit to the local oracle, which, as it turns out, isn't mere fantasy. Eivor seeks to understand recent visions  with the help of Valka. Religion really played a significant role in viking life and was concerned with everything  from success in battles to regular activities and problems of the daily life. Both men and women could be spiritual guides.

There was a whole range of religious practices  from ceremonies dedicated to gods and supernatural beings to magical practices aimed at "manipulating" human life and fate. These activities often involved shamanic practices. "Seidr magic" allowed one to make contact with the spirit world, sent their souls or senses into the world in animal form, control the weather, or enchant weapons. Archeology attests to the existence of such people (we know graves with magical objects, wands, amulets, etc.), but the "authenticity and effectiveness" of their actions is a matter of interpretation. 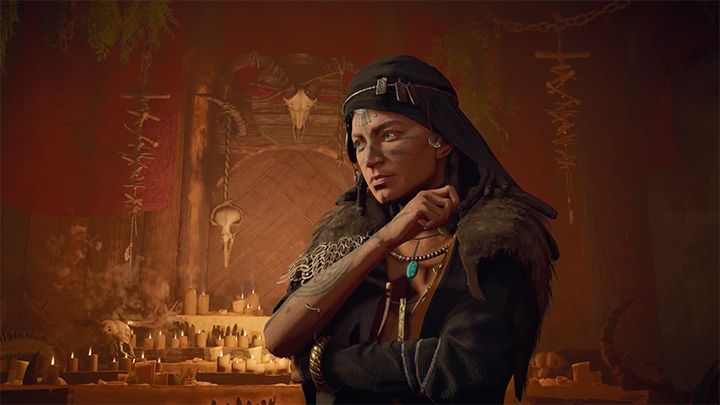 Is the Volka the historical Volva?

A certain equivalent of the in-game Valka is probably the character of Volva  an oracle who predicted the future, and knew about herbs and healing. She traveled a lot, and visited many settlements; perhaps she was famous enough to be invited by people. Another kind of link between people and the gods were local priests:

Godi / gydja (priest / priestess  literally meaning a god) were, on the one hand, lay people appointed by the community or rulers to perform the rites. On the other hand, there are reports and findings suggesting that they were people who completely devoted themselves to this function (we can't be sure whether it was off their own accord, or by the decision of family, for instance).

For vikings, it was extremely important to have good relations with each of their many gods, even if they all exhibited typically human qualities. Various ceremonies were regularly held in their honor. One of the most important were the consecration ceremonies called "Blót". These were typically sacrificial rites. Vikings sacrificed items, animals, and even people in return for specific benefits.

One of the most often sacrificed animals were horses  their blood was collected in bowls, and their flesh was cooked and eaten. Blood would be splashed on the altar and sprayed on people. These ceremonies also served the wealthier members of the community as a way to display their power and wealth. They often were feasts delivered to a congregation. In addition, there are reliable reports that people were also sacrificed during "blót" ceremonies. The god who "demanded" such sacrifices was, for example, Odin.

"Blót" ceremonies are consecration ceremonies. They weren't set on a particular day, rather, they were part of every holiday or celebration. The etymology of this term comes from the words meaning "sacrifice," "sacrifice," but also "blood." The essence was the sacrifice, the gift of food offerings to the gods or, in special cases, blood  usually animal, but human sacrifices were also likely made. Part of the ritual was spraying people, objects, and places requiring it, with blood. It was about the connection between life and the sanctification of the environment, a connection with the divine and supernatural spheres. 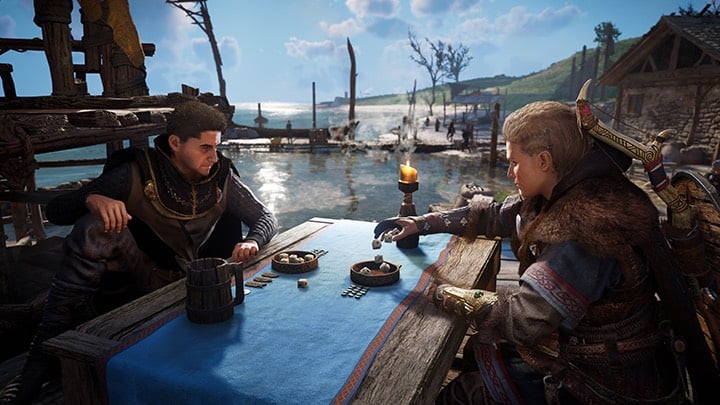 Plenty of stuff to do in spare time. For example, play games.

In the end, we left the most relaxed and carefree aspect of being a viking  both in Assassin's Creed: Valhalla, and probably in reality, that were games, also of the social kind. We have a game of dice (Orlog), an unusual duel with rhymed insults (Flyting) (more characteristic of the territories in England) and competitions in drinking, or fishing. What was it like in reality?

Archeology and written sources give us a lot of information about games. There were specific forms of wrestling, horse fighting, swimming competitions, "ball," and board games, such as Hnefatafl [a chess-type game  ed. note]. Many of these games required strength and dexterity  this helped the vikings to cultivate their physique.

In addition to feasts (usually on holidays that could last several days), the vikings sang, wrote poetry, listened to songs and stories of skalds, as well as played music (plenty of instruments were uncovered by archaeologists). They also competed in "sports" competitions  wrestling, various types of arcade or power games, cross-country running, and competitions related to combat prowess. In addition, we have many quite well preserved board games, generally called Tafl. And here's something interesting  it wasn't just entertainment. These were also used in religious context. 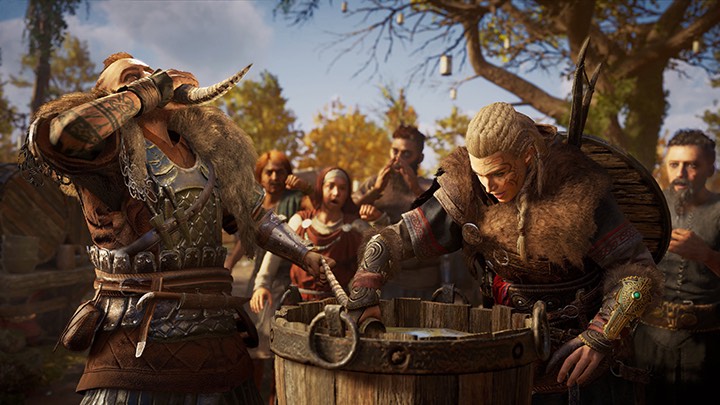 In addition to indulging in spare-time activities, we can go to a tattoo artist in the village to decorate your body. The creators have really invested a lot if time into preparing the wearable ink. Did vikings really do that? The answer isn't clear-cut, since skin obviously isn't as lasting as bones. In fact, the only suggestion that vikings did wear tattoos, or at least knew about the art of tattooing, is information from an Arabic merchant, who during his travels encounter the so-called Gardariki  often considered Norse people, they colonized the region of rivers Volga and the Dnieper.

There are some indications that the Vikings may have decorated their bodies with tattoos  one of them is the account of Arab traveler Ibn Fadlan. He mentions that the bodies of the Rus' people, whom he met on the Volga were decorated with various patterns (however, we do not know whether they were tattoos or simply paintings). Ibn Fadlan's account of the burial of a Rus dignitary coincides perfectly with what archeology shows us, that there's certainly credibility to his account.

In Vendel, central Sweden, for example, a small iron object was found, sometimes interpreted as a tool for tattooing. Interestingly, written sources also provide information about eye painting by men. From archaeological materials, in turn, we know about intentional modifications of teeth (cutting grooves in them and likely filling them with dye).

How "viking" is AC: Valhalla, then?

So, has Ubisoft in the end produced a credible world? We hope this article will allow you to appreciate it more and examine it more thoroughly, maybe inspire you to do more research yourself. Let us know if you yourself have stumbled upon unique curiosities  or, on the contrary, some huge inconsistencies? In a computer game, anything is possible, but the main thing is what we enjoy. The size of Valhalla's open world and the variety of activities included there is just dazzline.

The text was created in cooperation with Ubisoft.