By now, youve likely seen the news that theres a Fortnite creative event about Dr. Martin Luther King Jr.s famous I have a dream speech. For many, this came a bit out of the blue and was able to break through the current blizzard of distressing headlines coming from overseas at the moment. 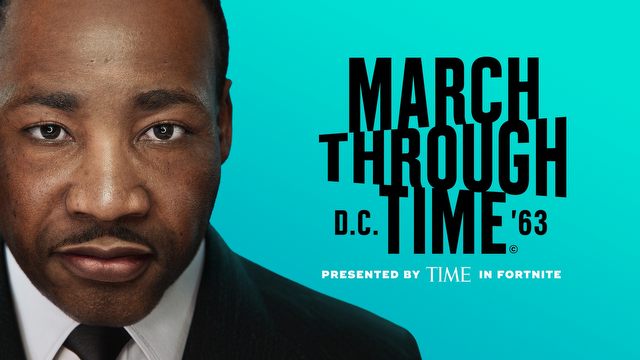 But given the gut reaction of the Fortnite brand taking on a subject as serious as the civil rights movement, it understandably raised a few eyebrows, even though the anniversary of the speech is on August 28th. The idea of a guy in a banana suit breakdancing as Dr. King delivers one of the most important speeches in American history does evoke a certain feeling that something sacred is at risk of being trivialized.

The reality is that, while yes, this is an unusual platform for Dr. Kings message, it doesnt quite devolve things into pure, online memery. The strength of Dr. Kings message is simply too powerful for that. His words, perhaps now more than ever, stir the soul with hope that there can be peace, equality, freedom, and justice for all people in the modern world, despite all the complexity that systems of power seem to have entangled themselves in.

As you load into the world, you find yourself on the national mall in Washington D.C., where Dr. Kings speech was famously delivered in front of the Lincoln Memorial. The speech is broadcast onto a large screen set up in the middle of the reflecting pool between the Washington and Lincoln memorials. 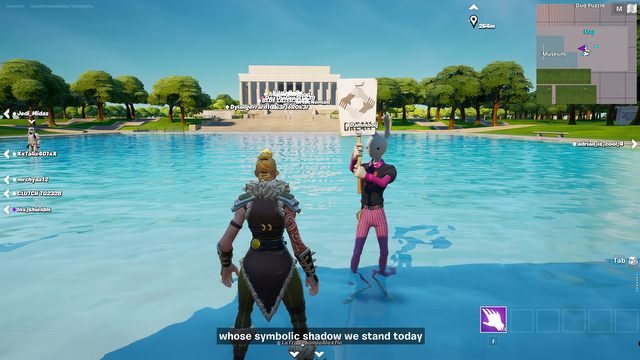 And to my surprise, though there was some emote spamming, the lobby for the most part stood still and watched the speech. This is truly a testament to Dr. Kings sheer verbal prowess  his words remain as captivating, universal, and vitally important as in 1963. But are they going to reach an audience that skews so young?

Fortnite is universally regarded as a game for kids, so it begs the question of whether they will get much out of this  beyond hearing the speech. There isnt any supplementary commentary to elucidate just how this single speech arguably changed the course of human history.

There is a museum exhibit beneath the screen, but it leaves much to be desired. If the goal were to inform children about the civil rights movement, some commentary, video or audio, would have done much to flesh out the experience. Theres no question kids need to be exposed to Dr. Kings message, and maybe it was because of schools being mostly closed around the world for the last year and half that this whole thing even came to be. 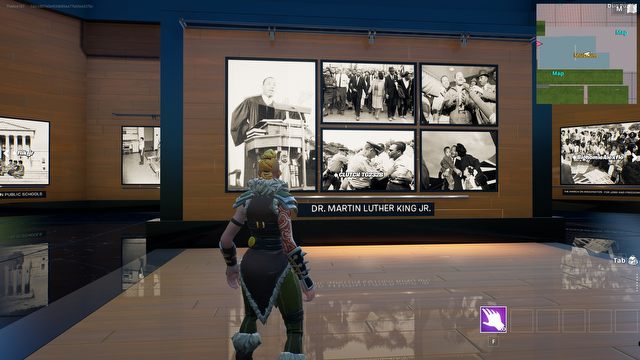 Theres a saying I live by and thats You suffer for what you dont know. This is, in essence, why its so important to teach and learn history. The lessons that were learned the hard way by our ancestors are instrumental to our survival and wellbeing as a society right now. Without them, we risk regressing back to our previous, much less civil, circumstances.

The importance of I have a dream is almost impossible to comprehend. It built a seawall to harbour future generations and laid out a simple and direct blueprint for how we can achieve an equitable society: I have a dream that my four little children will one day live in a nation where they will not be judged by the color of their skin, but by the content of their character.

In a single sentence, Dr. King distilled the essence of not just the American ethos of all men are created equal, but crystallized an idea that utterly smashed the paradigm of racial division. The fact that people ought to be judged by personal merits, rather than appearance, let alone the melanin content in their skin, is beyond any reasonable dispute. Unless, that is, we want a massive backslide into the darkness that humanity wallowed in for thousands of years. But again, are children really up to the enormous task of internalizing this, when even modern adults have trouble appreciating this simple rule?

What I realized as the speech ended, trying to put myself into the mindset of a 12-year-old watching it, was that its absolutely our job to be ready to explain things as complicated as civil rights, Dr. Kings legacy, and the meaning of this speech to younger generations. The good that could come out of this is simply prompting kids to ask who was Dr. King? or what does this speech mean? 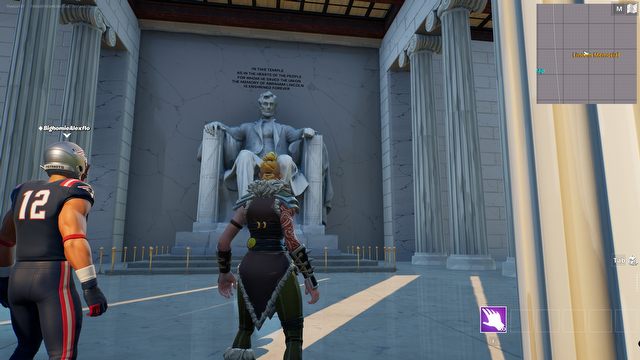 The way I see it, we have a duty to tend to the flame of Dr. Kings message because he gave up his life to give it to us, and theres no question just how much weve benefited as a society. It may not be something modern audiences will necessarily connect with, but the speech is deeply rooted in the religious world of sermons and scripture. Dr. King was, after all, a baptist minister. That spiritual connection may not have the same impact in a more secular world, but self-sacrifice for the benefit of humanity is not a trope so easily forgotten, and it cannot be easily underestimated regardless on one's views on faith.

Are we worthy of that sacrifice? That is the real question every person should ask themselves. So, while you may ask whether this Fortnite event was exactly in good taste, given the platform and its reputation for cartoon high-jinks, it sure wasnt exactly the cringey, out-of-touch spectacle most Fortnite events look like from the outside and at a distance. 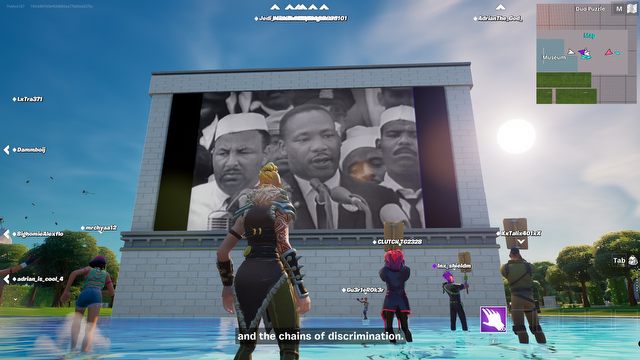 I dont have much experience with Fortnite events, but theyre usually something from the entertainment world. But to Epics credit, I don't suppose anyone else in the gaming world was even planning to mark the anniversary of Dr. Kings speech. When you have a massive, world-spanning platform, when and how is it appropriate to use it for broadcasts like these? This may be the first event like this theyve done, and perhaps it wont be the last if Fortnite and Epic games have gained more of a social conscience.

Was this the right medium? A bit of an awkward fit, but I was moved by the speech, once again. Is it good that kids are getting exposed to subjects like these? It's absolutely fantastic. But the thing we dont see here so clearly is that this is just a spark. Its up to each of us to tend to it, and grow the flame it creates.