"Agggrrrhhh! My uber goddamn man-o-war with six million worth of upgrades just sank because that absolute wussy blew up as I not only was boarding, sir  I was also winning!! Imagine that? All the money I made throughout the week is lost.

Why am I even playing this game?

Everyone whos ever played Naval Action has uttered this sentence at least once. It would seem that this game is about 18th-century ships. But that's just the surface; having spent the last few years in it (sic!) I realized that what this game really is, is a simulator of alternately suffering and inflicting pain. It's so unique and one-of-a-kind that it still boasts a broad audience, which gladly suffers its torments daily.

But what am I even saying? What's my point? Well  its suffering.

This concept is not alien to anyone, especially players who compete (i.e. kill) in on-line shooters, MOBAs, or PvP-oriented MMOs. Corpses in online games lay thick, but no one cares. In our case, it's similar, with only one difference  usually in games, death comes suddenly and is not punished severely. Your pride might get damaged, you might lose some gold or XP. That's cute. But we, hardened, weathered sailors, don't have it that easy. It takes a lot more.

Sea battles in Naval Action can easily take an hour and a half. The developers strove to reproduce sea battles of the age of sails and black powder as accurately as possible. Accordingly, nothing in the game happens too quickly  consequences of our decision might not come until 10 or 15 minutes later. Yes, my dear friends, after 90 minutes of that, I literally am mentally exhausted. Sometimes, you're just about to win, and you get slapped in the face in the last moment; when you start to lose, you feel like a mouse in the gentle embrace of a cat. And you know how cats are. They will torment you, decimate you, but they take their time. Your precious ship will be torn apart, piece by piece... until it s-i-n-k-s.

Do you understand? You are literally suffering all the while, of course, provided that the opponent is better or bigger. Or both. That's not the end of the story. The loss of every ship is tangible, certainly painful. The fancier your ship is, the more money sinks to the bottom. For some online oligarchs this may be a minor issue, but for most players, compensating for such a loss is not a matter of minutes  rather, hours, if not days.

You should get the picture now. Five angry hounds are chasing your precious frigate you've been developing for the last five days. They massacre you, sink your ship, and write "gg" or "o7" (that's how NA players salute). Meanwhile, you return to your single-mast cutter  literally with tears in your eyes. Every minute of the last hour was literally torture, and now, you're looking at a few days of relentlessly boring trade runs. You need to make money to sail out again on the wide waters on some worthy ship. Yeah, it's bad. 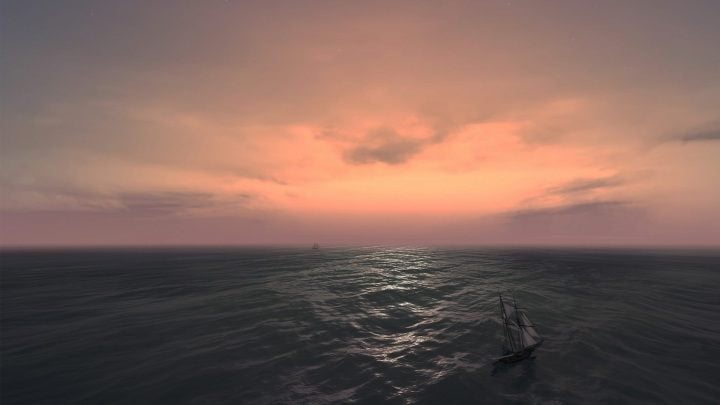 See that ominous figure on the horizon? This could be the harbinger of painful demise.

Who, in the name of all things, created a game like that? Today, when everything is supposed to be nice and easy, and everyone's a winner. Well, the game's not really Western. Only people from the former USSR could have done that. Game-Labs is a unique and, to be honest, quite mysterious studio. It turns out that Naval Action  a historical MMO with an open world, mind you  was created by about 10 people. Currently, 2-3 people are working on its development (at least this follows from official messages). It's hard to imagine a Western studio working on an MMO with such modest resources. Suffice it to say that Naval Action has sold almost 150 thousand copies, and every day, at the peak moment, there's about 1.4 thousand concurrent players  this number has been growing recently, which is quite impressive, considering the game's already 4-years-old!

There's more. Game-Labs are also the authors of perhaps the best strategy games about the American Civil War, since Sid Meier's Gettysburg  the appreciated Ultimate General: Civil War and Ultimate General: Gettysburg. In addition, this "allegedly" small, Ukrainian studio is simultaneously creating three more games along supporting Naval Action: Ultimate Admiral: Dreadnoughts, Ultimate Admiral: Age of Sail and This Land is My Land. All of these are playable in various stages (alphas and early access), reaping positive reviews from fans. Each also demonstrates a good technical level, definitely beyond the "small and fast indie" formula. You may ask  how is this possible? I don't know. It apparently just happens.

If you think this is the end of the torture, you're wrong. The mentioned trade cruises are not just boring. Oh no. That would be too easy. They're also very risky. The old-timers know where to hide to ambush an opulent fleet of several merchant ships, packed to the brim with valuable goodies. Imagine: after 1-2 hours of creeping from one end of the Caribbean to the other, a fast, hostile frigate suddenly appears on the horizon and a clean, interceptor course is set.

In a few seconds, our body switches from pre-REM vegetation phase to almost hysteria and a rush of adrenaline. There's battle, there's carnage, and after another 20 minutes, the neighbors can hear the harrowing, agonal "FUUUU..." We've lost time and a lot of money, so now we have to spend even more time earning money. After all, the game doesn't offer any specific compensation. To go hunting again, you must first earn, trade, or complete a few boring PvE missions. Saddening.