Pillars of Eternity is a remarkable RPG which managed to refresh the mainstay of the genre. Obsidian have decided to keep striking the hot iron by making another game, based on the same principles. And its hardly a surprise  the developers have all the tools at hand; all they had to do was to stitch all the parts together and boom!  heres another game. But this is only partially true in case of Tyranny: people from Obsidian didnt take the easiest route, and they have introduced some elements which distinguish this game from their previous title. 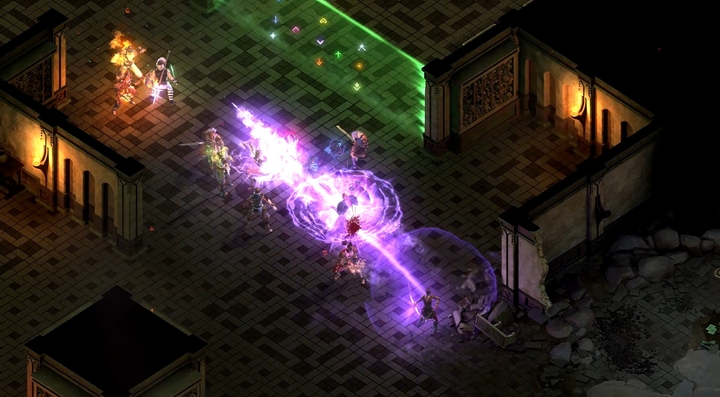 The premise of this project is very interesting: the events take place in a land called Tiers, the main difference between other typical fantasy worlds being that here, the Evil had already won. The protagonist isnt a good candidate for a saint  the players will control an officer of the army which conquered Tiers, and according to the devs, hes going to be a no-good scoundrel. The players can keep his nasty character in check to some degree, but theres no place for chivalric deeds of a knight in shining armor. Analogically to Pillars of Eternity, the players will create an avatar at the beginning, and the team will be assembled throughout the game.

Enacting a rather villainous hero may not be the most original idea of the decade, but whenever such idea has been utilized, it was approached in a lighthearted manner (see Dungeon Keeper or Overlord). In case of Tyranny, however, were dealing with a serious and gloomy story, a negative Mass Effect of sorts; no matter whether Shepard was an idealist or a renegade  he (or she) always saved the Galaxy. Meanwhile, the protagonist of Tyranny is a bastard through and through. 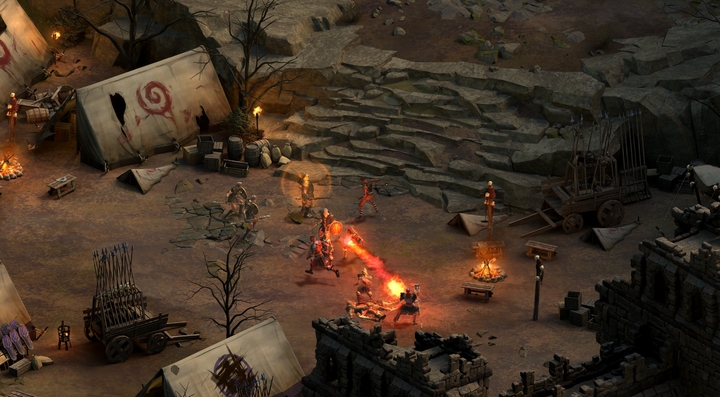 The devs allowed me to play through a short level in which a rebels stronghold was being stormed. The resistance is among the factions that the players will be able to cooperate with (or fight them  the choice, and the consequences, are yours). Apart from that, there were two more factions participating in the attack, and the protagonists role during the siege depends on the faction that the player had sided with. My target were the rebel mages who were maintaining a magical barrier protecting the castles walls. As you might have guessed, I had to kill them. 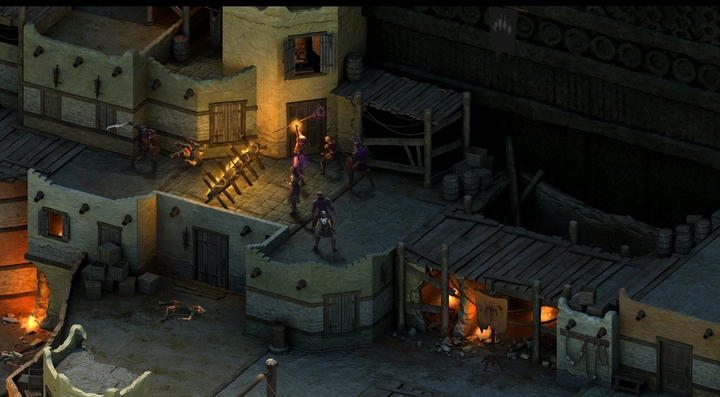 A skirmish with a unit of rebel soldiers broke out at the very beginning. The fighting is very similar to Pillars of Eternity, hence we have real-time combat with active pause. The tactics of the whole team can be pre-defined, but  as always  controlling them individually on the fly proves most effective. The way the abilities work also reminds me of the solutions from the previous game by Obsidian: there are offensive, defensive, and buffing skills. Some of them affect individuals, others have an area of effect. Its hard to estimate how many skills will be available in the final build, but there seems to be plenty of them already  and I was told that Id seen just a part of it. 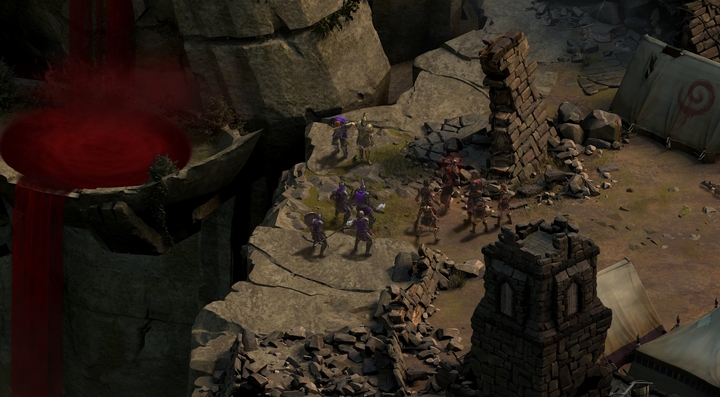 Group skills are yet another novelty in the combat system  these are certain skills that the members of the party use together with the main character. For example, one of them can knock down an opponent who is then finished off by the protagonist. Such sequences are, obviously, dependant on the chosen skills, as well as on the opinion that the team members have about the protagonist. Thats nothing new, of course, but such dependencies are always a welcomed addition to the classic RPG convention. 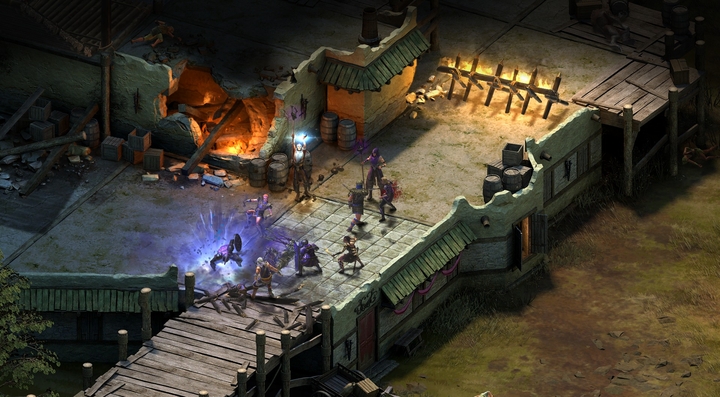 The overhauled interface, which is now much more legible, is also an advantage. There are contextual text quests, which are completed solely using dialogues. Usually their point is to test the protagonists skill and abilities levels. Such trials often appear during dialogues with NPCs  having a sufficiently high level of a given skill will unlock additional dialogue options. Ive learned that such occurrences are supposed to be much more frequent than in Pillars of Eternity.

Since were talking about skills  lets talk character development. This time, the protagonist is classless  using skills often will increase their efficiency, similarly to the solution known from The Elder Scrolls series. Along with the development of certain attributes we unlock skills and spells. There will also be the possibility to create your own spells, but theres not much information on this element so far. The items carried by the team are also going to be important. 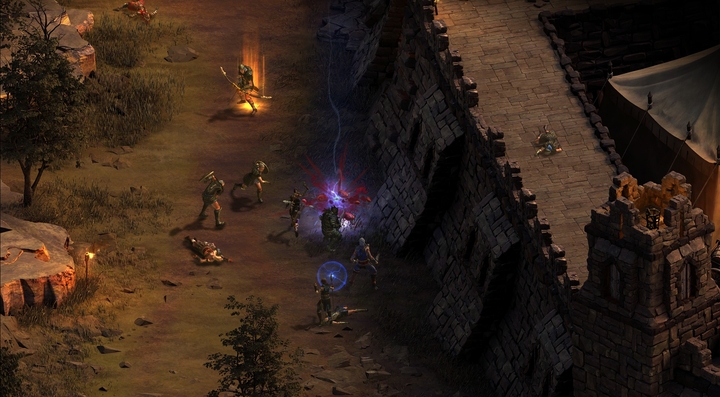 Tyranny will be shorter than Pillars of Eternity  finishing it should take around 25 hours, but the devs want to encourage multiple playthroughs by implementing a lot of choices. Even during my brief session, I had to make a couple of decisions, which would influenced further events. Although Pillars have also confronted players with such choices, it was much more linear; this game is supposed to be significantly more flexible. Obsidian are consequent in terms of romances in their games: much like in Pillars  and it was hardly a bad decision  theres no room for butterflies in the stomach of this officer.

Tyranny seems to have more gloomy aesthetics, too. The spells are about the only colorful thing here  the rest of the game world is pretty sulky and far from a fairy-tale. Which is of course justified, considering the history of the land conquered by the forces of Evil. There are around eighty locations in the game, and many of them have a strong post-apocalyptic vibe. It all makes a nice impression, but Tyranny is not really a leap forward in terms of graphics. The visual layer has just been upgraded a bit. 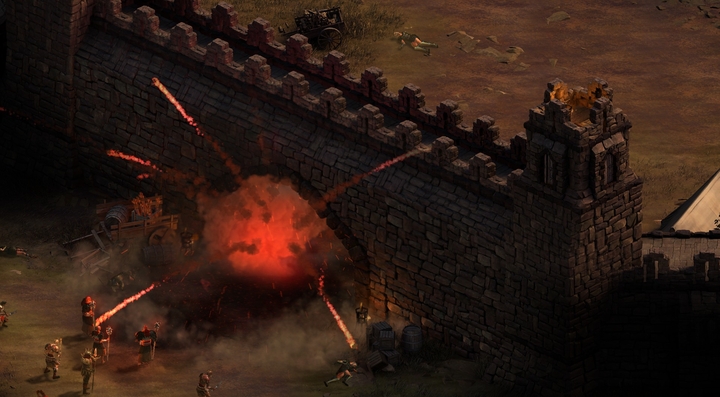 At first glance, Tyranny looks like an appetizer, taking place somewhere between the first and the second Pillars of Eternity. Even if it would turn out this way, this game still has a chance of becoming a very solid entry in Obsidians gameography  you can really feel that these guys know what classic RPGs were about, and theyre able to skillfully play with those conventions. The premise may be close to their previous titles, but the details can make this game a totally different experience. If you are still unconvinced, theres still some waiting ahead. While the game is supposed to be released this year, we werent able to convince Obsidian to reveal a more specific date.

According to our users, Tyranny for PC was a disappointment - the expectations before the release were higher than the current average user score. Our reviewer rated the game 7/10, you can read full review here: Tyranny Review  an RPG full of contrasts