25 years ago, I was playing Quake like everyone else. I never experienced the full game, though, rerunning the shareware version containing the first episode instead. It might have not been a suitable game at that age, but the 12-year-old me was completely enthralled by the dark atmosphere, the ability to move the camera up and down, even to select the difficulty level. 1996 shook the gaming foundations. It was a real earthquake! So, I think Quake deserves a new coat of paint  worthy of the third decade of the 21st century.

The idea is certainly not surprising. Doom returned in 2016 as a sensational reboot and showed that id Software's classic shooter, a bloody one with a residual storyline, can be easily and successfully brought up to the standards of modern gaming. Quake should get identical treatment, provided that it's the first of modern Dooms that the creators would look up to. Eternal is a good game, but it's a bit over-engineered. The simplicity of its antecedent, on the other hand, should work perfectly for the granddaddy of 3D FPS. Especially since the gameplay rules are already established and do not require a lot of updating. 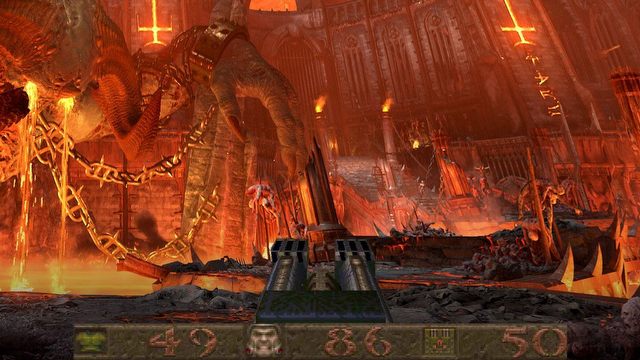 The plot? Simple, but easy to expand. A silent, tough hero? Check! Dozens of iconic monsters? Sure thing! Recognizable tools of destruction? Yes sir! Based on levels and episodes? O-F-C! Just wrap it up in a new engine, make it slicker, and there you have it. Simple, right? OK, maybe it wouldn't be that simple, but let's try to imagine a potential Quake AD 2022.

The Ranger must defend Earth from an ancient evil. The protagonist learns about four runes that must be obtained to close the gates of evil or something. The runes are guarded by some sort of demonic abominations. A system of magical portals allows you to jump between worlds and make your way through levels full of monsters. Separate worlds mean different creatures and scenery, which provides nice variety. Tie it all together with some sort of wonderful gibberish story about a scientific expedition to these places, allowing the lore to expand with lost diaries, recordings, failed research  bloodied remnants of human presence far from home. In the end, only Ranger  like Doom Slayer  is able to cope with this challenge. 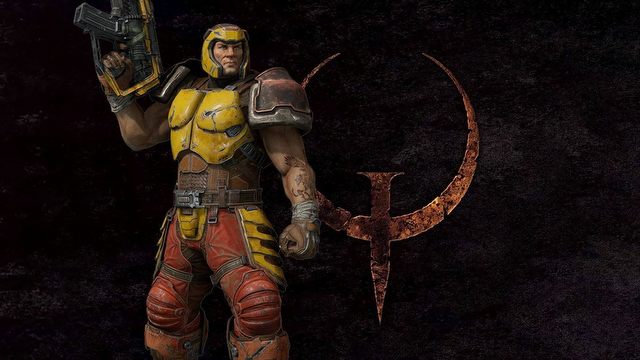 The original Quake would make it quite easy for developers to have a base similar to Eternal's inserted into the game. The hub could act as a Ranger's lair, where you could do this and that  albeit a much more modest than Slayer's orbital cottage. In our base, we would keep trophies displaying all the enemies we defeated, and would view an ever-growing arsenal, with the ability to choose a starting weapon  having unlocked it first. Speaking of guns...

The 1996 set of weapons is not bad, but would need a fair amount of modification. The most important thing would be to add an alternate mode for each of them, which would naturally require some of the designs to be overhauled. Two shotguns are a bit excessive, so the basic firearm could be a pistol, while the useless axe (seriously, did any of you ever use it?) should turn into the strongest, total weapon, like the energy sword from Doom Eternal. The welder is great and all, but it lacks the ultimate effect, the eternal fury directed at the inter-dimensional creatures. 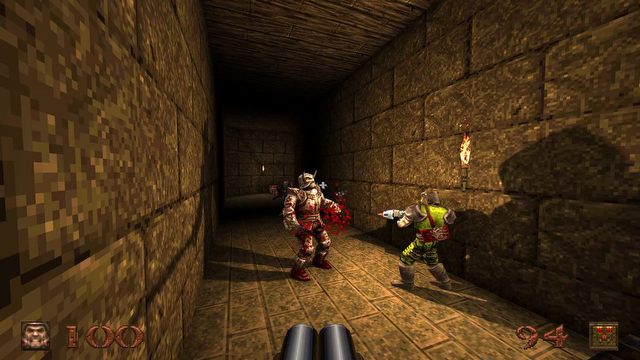 All the other new features  from the overall audio-visual overhaul (though nobody should touch Trent Reznor's OST, and the only possibility is him composing a new one), to expanded multiplayer, to all the quality-of-life improvements (such as even smoother movement of the protagonist)  are to be considered obvious and self-explanatory. But we're not there yet. What we've got is a remaster released to celebrate this year's QuakeCon. And that's great as well!

I went back to the first Quake after more than two decades, on brand new hardware (long live the Switch!), and found that the original is far more impressive than all the recently released retro-shooters. Small graphical tweaks like improved monster designs and dynamic lighting elevate the game beyond the usual "here's the game you loved as a kid  in HD." The developers are clearly Quake fans and have managed to rekindle my passion for the brand. Cause, you see, I'm not very interested in the multiplayer-only version of the game. What I want is to decimate hosts of monsters to the accompaniment of dark music. If Bethesda wanted to test the ground ahead of the big return of Quake to the mainstream, then let them know we're ready!

One of the first M-rated games I played too soon was Doom. Then, almost simultaneously, came Duke Nukem 3D and Quake. The former was fun, colorful, and crazy, and the latter allowed you to look in every direction and see the monsters from behind as well. It was clear that this would change the gaming world, though I obviously didn't realize just how much. Quake 2 was even better, and Quake 3 was a disappointment  I didn't play it and still don't play online. Quake 4 is an interesting sequel to Quake 2, but I think it came at the wrong time. The right time seems about now. So let Quake come back in full glory. Today, after more than a quarter century of gaming, I'm looking more and more toward remakes. Provided they are made with passion and really embrace modern capabilities.