Atelier Sophie 2: The Alchemist of the Mysterious Dream Game review

The latest installment in the Atelier series, Atelier Sophie 2: The Alchemist of the Mysterious Dream, continues the story of the young alchemist, Sophie from where her story left off in Atelier Sophie: The Alchemist of the Mysterious Book in 2015. Overall, there have been over twenty other games in the Atelier series, following various other characters since 1997, but the series only started releasing games outside of Japan for the first time in 2005.

The latest in the series picks up with the protagonist, Sophie Neuenmuller, a talented alchemist, and her companion Plachta, whose soul, once trapped in the mysterious book, is now trapped in a life-like doll. The two of them are investigating a dream that Plachta had about a huge tree. Once they find the tree, Plachta and Sophie are pulled into a mysterious portal that drops Sophie into a new dream world, where she needs to do everything she can to find her friend again. 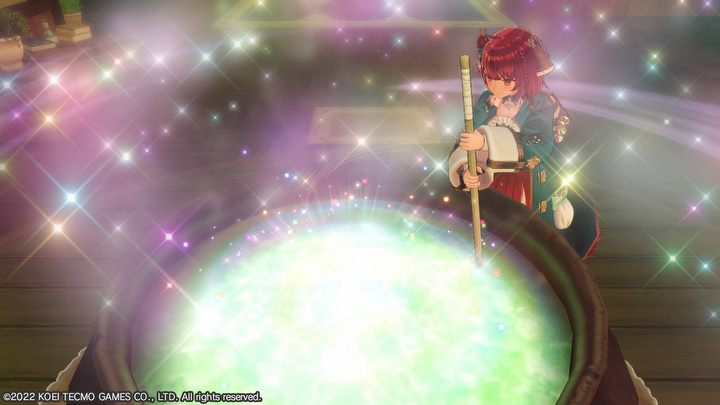 Atelier Sophie 2 features a varied cast of characters, turn-based combat, and an explorable world full of materials that can be used for crafting. While the story focuses on Sophie’s quest to find her lost friend, the gameplay centers around collecting materials and crafting equipment using alchemy to upgrade characters and aid in combat.

But before getting into the rest of the review, it should be mentioned that this game does have an issue with fanservice. This subject came up in a previous review of Blue Reflection: Second Light, a game series also developed by Gust Co. Ltd., who developed many previous Atelier games. Though it is worth noting that Atelier Sophie 2 was developed by Koei Tecmo. Regardless, the character design in Atelier Sophie 2 continues a trend of overt fanservice when designing female characters, such as putting them in overly revealing “armor” or warping realistic body proportions, that does nothing to service the game itself, only to cater to and draw in a very specific audience. It is unfortunate that Atelier Sophie 2: The Alchemist of the Mysterious Dream decided not to break this trend.

Fortunately, despite being dragged down by seemingly pointless fanservice, the gameplay for Atelier Sohpie 2 can still be engaging. Like the game in general, things start out slow and methodical, but speed up afterwards. Of course, like most RPGs, there is combat. Monsters roam around the outskirts of town in the dream world, and when they come in contact with the player it initiates turn-based combat that while hardly innovative, does have some fun moments. 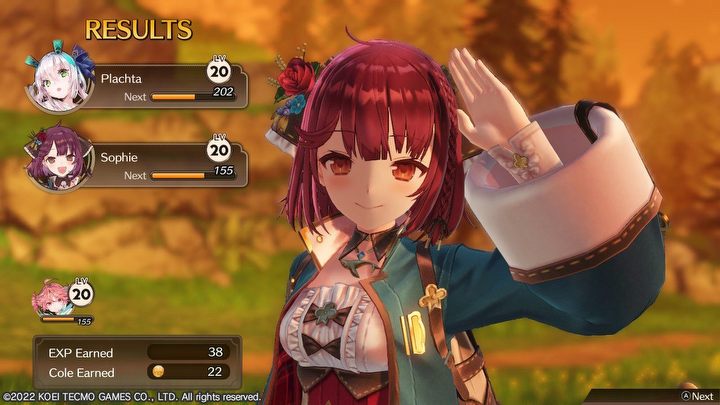 Unfortunately for those players that are on the impatient side, the more rewarding and engaging gameplay will be a slog to get to. The first roughly two hours of this game are mostly dialogue and story, where nothing but an occasional button press is required from the player to continue to the next line of dialogue. Between some of these patches of dialogue the player may need to run from one side of the map to the other, which is an exciting change of pace at first, but presents no real challenge and only rewards the player with a little progression and fistfuls of more dialogue. This is not unusual for most RPGs, but it is something certain players should be aware of.

The gameplay gets a major upgrade when the story brings the protagonist to the wider world outside of the city. While there is a lot to interact with, it does still feel empty given that monsters will not chase you and anything interactive visually blinks in the overworld. Despite this, it does enhance the experience. Collecting materials also greatly expands one of the best gameplay elements, synthesizing.

Synthesizing is a process in which Sophie uses her alchemy skills to create consumable items or equipment. While other popular games with material gathering and crafting mechanics simply have the player stop at a workbench and slam ingredients together, Atelier Sophie 2 turns the crafting process into its own mini game. 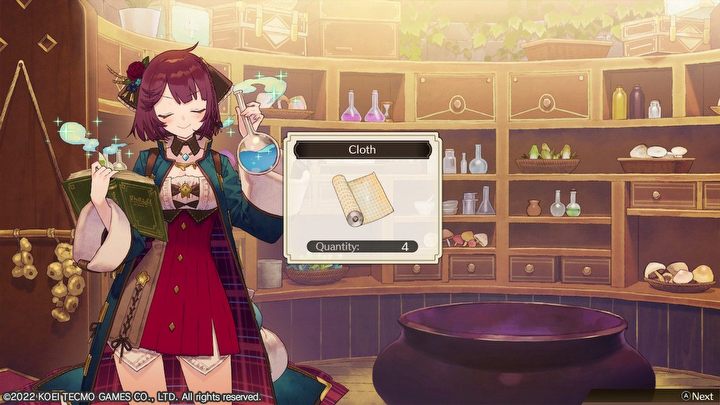 Crafting even the simplest items requires the player to engage in a puzzle game of placing the right ingredients in the right spots. Placing ingredients in certain spots and sometimes even near each other, can change the eventual quality of the material being produced. This means that while the end goal is to create something, there are multiple ways to solve that puzzle and different levels of success.

It’s great that one of the highlights of this game is the alchemy. The game could have easily just called Sophie an alchemist and for all intents and purposes she just acted as a wizard in combat. But this element not only adds a fun and challenging element to the game, but enhances the protagonist’s story as well. It is also worth pointing out that this is not a new mechanic to the Atelier series, but it is much more polished than in the previous Atelier Sophie title.

Atelier Sophie 2: The Alchemist of the Mysterious Dream continues where the series left off with the talented alchemist, Sophie. This game excels as a laid-back story-centric game with some great elements, like using alchemy to synthesize items, and not so great elements, like the somewhat lackluster exploration mechanics. Overall, it’s a calm and relaxing journey through a strange fantasy world that will be exactly what some players are looking for.

As mentioned before, the game does attempt to have an almost open-world style environment where monsters roam about and the player can find various crafting materials. This environment gets the job done, but doesn’t really add much to gameplay. Materials are not hard to find, it just is a matter of having the right tool to harvest them. Monsters also just wander around aimlessly, and don’t even seem to notice if the player passes by, making the threat of monsters really an optional experience. Combat is only necessary when it’s part of the story, a quest, or because the monster has the required materials. This combines to make the world seem a lot less explorable, and more like the player is on a set path. 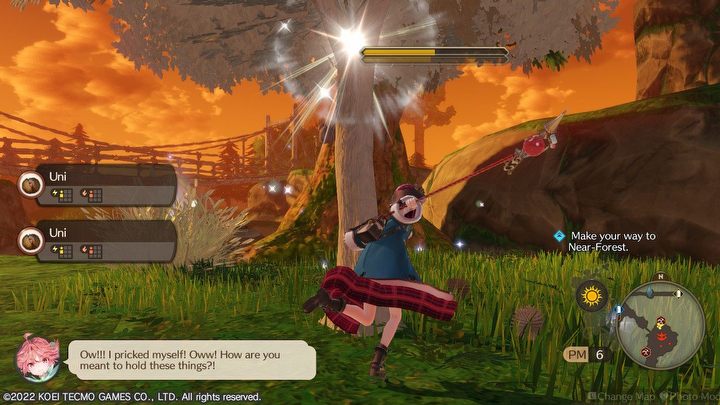 The story does its job, pushing the player from one scenario to the next, opening up the world and upgrading the challenge progressively. Especially early on it can start to feel more like watching a TV show and occasionally pressing the “A” button to continue. The mystery of the dream world itself and what happened to Sophie’s friend Plachta can sometimes just be engaging enough to keep the player hooked. But the story certainly isn’t much of a highlight.

The graphics are also fairly serviceable, though it is easily noticeable which characters are important and which are not. Important characters have unique and inspired designs, and while casual townsfolk certainly look like they belong in this world, they often wear far more muted colors and have less detailed designs.

When players do decide to engage a monster, it initiates turn-based combat. This combat can be slow, especially early on, but does offer a few more dynamic mechanics than the typical turn-based experience. 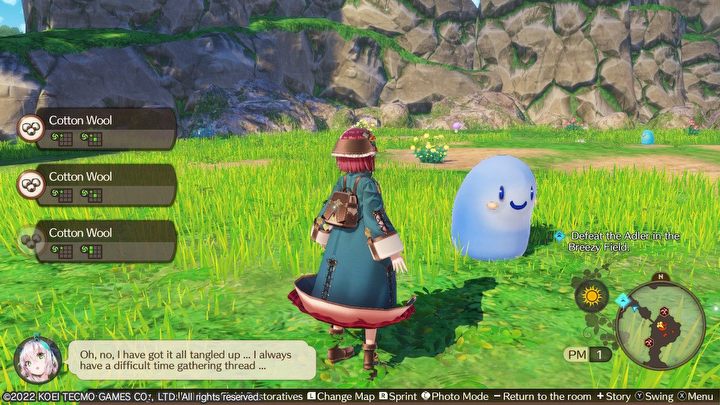 Technical Points can be gained in various ways, including attacking the monster to engage combat, rather than just walking into it. These points can be used to allow characters to perform devastating combo attacks on the same turn or swap in just as a monster is attacking to block the hit and lower the incoming damage. Aside from that there are consumable items and skills unique to each character.

For the most part the combat is much like any other turn-based RPG, but the technical points do give the combat a more unique feeling. Plus, the various characters working together to defeat monsters or jumping in the way of an attack does help build a sense of direct teamwork that isn’t as common in some other turn-based RPGs.

Overall, Atelier Sophie 2 is not a nightmare. It is a slow and relaxing RPG experience, which can be exactly what some players are after. Many elements don’t do the game any favors, like the slow beginning and questionable fanservice. Some elements like the explorable world and material harvesting also fall flat even if they do manage to get the job done. 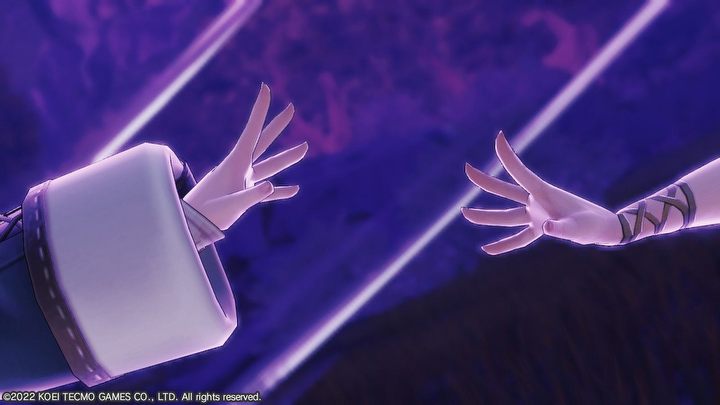 Utilizing alchemy to synthesize items is certainly a highlight of the gameplay and the actual story of Atelier Sophie 2, which makes sense given the game’s focus on alchemy. Combat might be slow, but it does have a relatively unique twist of teamwork where characters can use combos and block damage for each other that helps make the character’s relationships feel important.

While certainly not the best RPG on the Switch, Atelier Sophie 2: The Alchemist of the Mysterious Dream can be a good time. Anyone in the mood for a anime-style, relaxed experience of collecting a ton of materials, turn-based combat, and an in depth crafting system, this is the game for you. 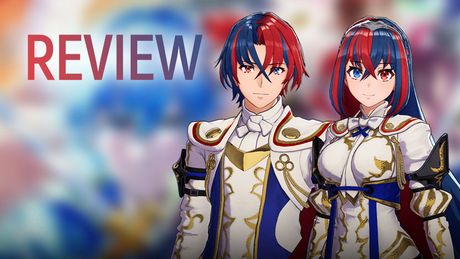 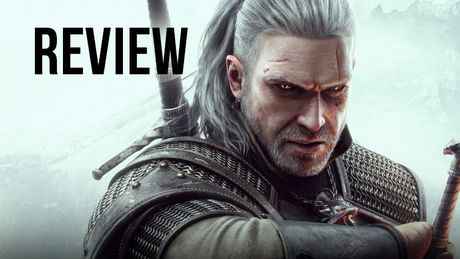