Battle Brothers is a hard game. Even if you’ve played similar games before, it’s recommended that you start with ‘Beginner’ difficulty and play the tutorial!

If such a warning appears in the game's main menu, then something is definitely up. Battle Brothers is one of those games where you first take a horrible beating, then read and watch tutorials for hours (been there, done that), only to continue getting the beating, but now at least knowing why. Yes, it's a difficult, but at the same time fantastic sandbox strategy, which repays for the effort put into understanding it with an exciting combat system, great dark-fantasy atmosphere, and hundreds of hours of content.

I've been looking forward to Battle Brothers for a long time, but somehow, I didn't like it on the PC. Thanks to the Switch port, I've been lost for the past two weeks, because despite the flaws, is grossly engaging.

Battle Brothers is the what the child of Mount & Blade and Darkest Dungeon would look like. Why is that? Half of the game is spent on the world map, commanding a team of mercenaries in real time, managing their equipment, choosing the right gear, buying resources or developing the skills of our comrades-in-arms. The other half of the time is spent in hardcore, punishing and deadly turn-based battles. It's a sandbox strategy that I also associate with Jagged Alliance, and that's because of the attachment we get to our kills, as well as the elaborate, RPG-like system of developing their characters. 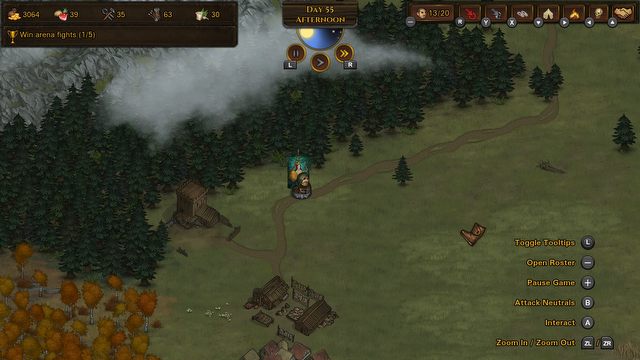 What does it look like in practice? In the game we stand at the head of a small group of mercenaries, and our goal is... Whatever we decide it should be. So, we travel around the world, complete missions taken in the towns (kill monsters that nest in the area, deliver a package to another town, protect a caravan), recruit new comrades, to finally make them a team able to take on any challenge. We are driven by economic needs – money is always running out (our brothers need food and a regular paycheck, otherwise they'll leave us), the desire to discover the secrets of the world or creating the perfect roster of warriors... This game is a real paradise, especially for minmaxers, but they're not the only ones who can enjoy it.

The sandbox nature of the game means that it's up to us to decide whether we want to focus on helping the inhabitants of the world, or decide to loot caravans and attack innocent villagers. Eventually, we will have to deal with subsequent crises, or important events that affect the world of the entire game, such as a large invasion of orcs, or the undead. How we prepare for them, however, is up to us. 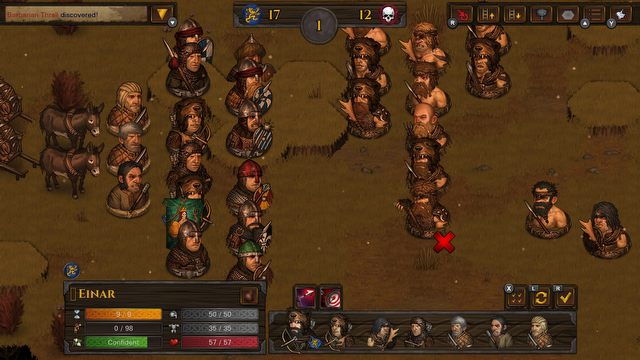 A jolly company of brothers

There can be up to 20 brothers in our company, of which only 12 can enter the battlefield. Turn-based battles are very tactical and difficult – many times, we're outnumbered, and the battles can last for dozens of minutes. We'll surely lose many mercenaries at the beginning of the game – which is not always a tragedy. Some of them are just weak, and even painstaking training will not make them the killing machines we need over time. Unlike Darkest Dungeon, however, Battle Brothers is not a roguelike – between fights, we can save the game freely, so nothing stands in the way of reloading a battle in which our best archer fell, for example. There's nothing stopping you from making BB a roguelike by enabling the iron mode, but that's a challenge for the best – definitely not worth starting the game like that.

What delights me about Battle Brothers is how the relatively simple combat system has tremendous replayability. Clashes, even if they are often similar to each other, as we often fight similar squads of, for example, bandits, are not conductive to boredom – just a few unlucky casts, a single wrong decision, and the RNG gods will not hesitate to sacrifice our best warrior, whom we trained for the last several hours. The thrill of every turn doesn't go away even after dozens of hours of playing. It's a bit like in Dark Souls, where even the most basic enemies can be deadly. 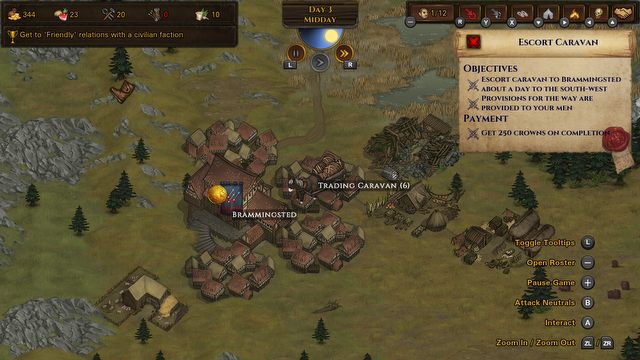 There is no single Battle Brothers world. The land, where we will stand at the head of our team of sellswords, is generated anew every time. Of course, there will always be a set of identical assets (e.g., In the city with a salt mine we can cheaply buy ... salt, enemy camps, legendary items or cities, but their distribution affects how our gameplay will go. Some maps will offer convenient trading possibilities, while others will include perfect beachheads for expeditions into wild areas full of formidable enemies.

No matter what our map looks like, one thing is certain. We find ourselves in a dark fantasy world inspired by the late Middle Ages. There are witches kidnapping children, witch hunts, necromancers trying to conquer the world, or mysterious cultists worshipping dark deities. You won't actually find any magic here, so we have to face all those ghosts, undead, and giant snakes in the conventional way. So, the grim atmosphere of this world works well with the difficulty level. Combined with great music, it makes it really hard to tear yourself away from the game.

A spoonful of tar in the barrel of tactical honey

In theory, Battle Brothers is the perfect game for Switch. It can be played for hours on end without a break, but short sessions also work great – completing a simple quest, a trip to the south to face the wild animals in an arena, or a trip to the place where you can recruit good archers, are tasks that can be done in around 15 minutes. Unfortunately, the port doesn't really deliver – and it's not even about handling the game with a pad, which can almost give you a whiplash, but over time, it eventually becomes natural and basically stops bothering us, although it's never quite perfect. 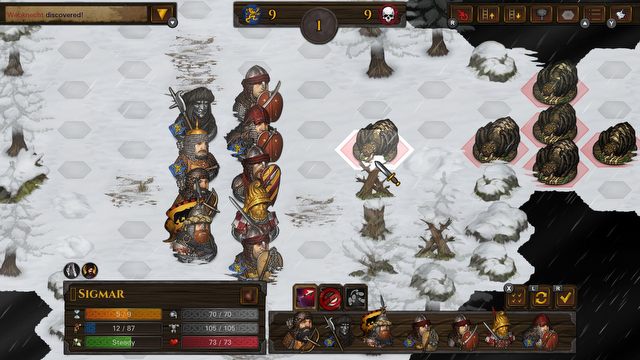 It is also not very convenient to browse the map, which is an important activity at the beginning of any new game. Battle Brothers on Switch runs pretty sluggishly as well, and has some bugs and glitches. Another disadvantage is lack of mods, which introduced many useful changes to QoL on PC – from faster passage of time (useful, where we escort a caravan and nothing interesting happens) or greater transparency of skills, items or events that we encounter in the game.

Importantly, however, while these problems are annoying (and some of them really need addressing), they definitely don't make the Switch port unplayable. But it is certainly less comfortable to play and if you have a choice, it's better to go for the game on PC. But at the end of the day, this is turn-based strategy, so the aforementioned shortcomings don't affect core gameplay, which itself is just insanely addictive. By the way, having a choice of platform, I still prefer to play Battle Brothers on Switch. I simply prioritize the ease of access that this console offers.

Worth it? Hell yes!

I am both thrilled and appalled at the sheer volume of content that Battle Brothers offers. You can easily spend hundreds of hours in the game – just learning it takes a dozen or so hours (which, importantly, is not particularly frustrating), and when you get bored with the classic gameplay, you can just raise the difficulty level and start testing yourself in iron mode, in which every death and every mistake is final and ultimate. DLCs also offer additional variety, in the form of not only new enemies or weapons, but also unusual gameplay rules. For example, we get a very strong warrior at the beginning, but we won't be able to recruit more than 12 companions – which will make the game much harder in the long run. And there are at least a few such interesting variants, strongly diversifying the gameplay. 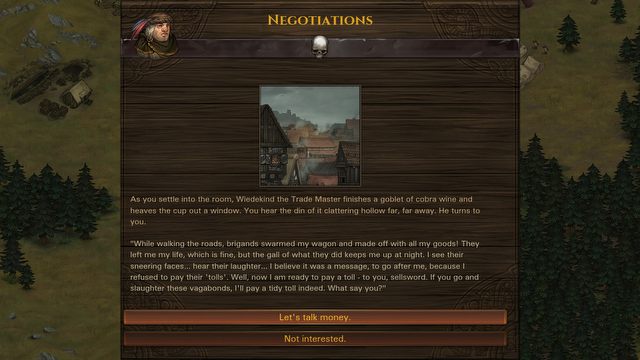 Battle Brothers is a great little strategy. It doesn't come with dazzling graphics (there is a joke among fans: what could the sequel do better than the original? Legs), it has a high entry threshold, works with some problems on Switch, takes some getting used to, and will need a few patches – but that doesn't change the fact that I just can't stop playing it. After Dead Cells, Hades or Into the Breach, this is my new grow heroine. So, if you like tactical games, hardcore strategies, and have too much free time on your hands, treat yourself! Yes, I know that the game is not cheap, and with extras (that are definitely worth the buck) it comes out even more expensive, but it's worth it. It's definitely the most engaging gaming experience I've had in a long time.

I love small strategy games for Switch. I had a great time on this console with Into the Breach, and I can't get away from Battle Brothers. I've spent over 40 hours with the game so far, and considering how poor this year has been in terms of releases, it's just the beginning...

We received a review copy of the game free of charge from Plan of Attack.