We've already prepared a general overview of 2019' best strategy games and discussed all last year titles which you might have missed, but were definitely worth playing. However, to complete the picture of the current situation prevailing on the strategy games market, the best option is to take an in-depth look at this genre. To do this, we will check some unconventional and unique strategy games, that were not only released in the past year, but also in recent years. We will especially focus on titles which in the abundance of blockbusters could have escaped your attention.

This time our list is dominated by economic strategy games like city builders and some smaller-scale tactical games. Most of the mentioned titles are totally new brands, although you will also encounter some well-known franchises or universes like the popular Warhammer 40k. For these reasons, fans of minimalism, both in terms of graphics and gameplay, and supporters of rather simple mechanics, which are based on addictive patents, should be particularly pleased and happy while reading this text.

Since we didn't want to limit ourselves to the default platform of a particular strategy game, which is definitely the PC, we have listed quite a few titles that were originally released for gaming consoles or mobile devices. Although many hardcore computer enthusiasts (or generals) will probably feel agitated or insulted at this point, I advise you to refrain from emotions and check at least some of the games listed here, because each of them somehow deserved a mention in this list. 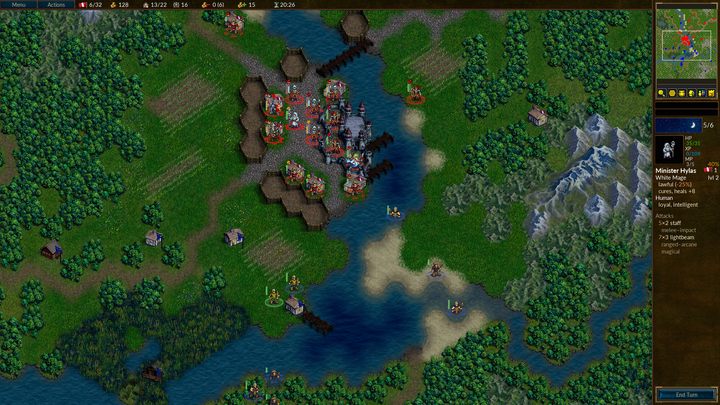 The first game on our list is a truly noble project. Battle for Wesnoth is a representative of the genre of classic turn-based strategies, with action set in fantasy world enriched with RPG elements. It is also a completely free to play game and has been developed by game designers and the gaming community for many years.

We have to admit that games released under a free-software license are a real rarity, especially if we are talking about a title that seems to be very successful and was created for pure fun. The gameplay of The Battle for Wesnoth perfectly fits into the canon of its genre. The gameplay takes place on a hexagonal map and the main premise of the game is pretty simple – maintain your castle and conquer the castles of your competitors. The key to success is the skillful use of properties and abilities of all units. As a player you have lots of them at your disposal.

Due to the fact that the game has been in development for many years, it currently offers tons of content. There are several single player campaigns available, as well as many maps and scenarios. This unlimited amount of content doesn't seem to have an end because the large and active community constantly adds new features and mods to the game. Nothing prevents you from using additional maps or mods to abandon the fantasy world and move, for example, to Europe of the XVII century.

Despite its simplified graphics, Battle for Wesnoth is a real treat for all fans of classic video games like Heroes of Might & Magic III.