The new Crash isn't subtitled It's About Time for no reason. This is not only about the creation of a story continuation of part three after many years (not counting the relatively fresh remaster of the entire trilogy), but also about the main theme of these productions. Which is the aforementioned time.

So we leap with our cute bandics between dimensions, trying to get the same bad guys for the fourth time. However, it's impossible to hide that the theme also became somewhat of an artistic idea of the creators. They reached into the past but needed some base – the game Crash Bandicoot N. Sane Trilogy provided it. They also took a look at a few other platformers and borrowed some of the most interesting mechanics from them. And all of this was done in an audiovisual setting reminiscent of Pixar's best animated films of the past few years. The new Crash doesn't aim to be the trend-setter in the genre, just its leading representative.

But we've already seen it! So what?

I really don't know what you could expect from this game. Because I understand both the players demanding fundamental changes, and the group of traditionalists, who want the new games to have as much fidelity to the original as possible. But I don't either any of them will be met with bitter disappointment.

You can see from the start that we're playing the same game, only better. The first movements we performed have an almost identical feel – and all the jumps, twists and other stunts were almost copied from the N. Sane Trilogy. In addition, the first locations look strangely familiar. We start again on the beach, and there's a lot of crates waiting to be smashed. Once again, you can fall into the apple-picking mania in between dodging deadly obstacles. The framework remains the same; we don't have to learn anything from scratch, but fresh players won't be suddenly overwhelmed by some advanced mechanics.

On the other hand, you can't complain about boredom, the levels impress with dynamism and colours already at the start, and the high difficulty becomes apparent right away. Some of you will probably ask: "Why play the same game again?” The answer: "Patience, lad, patience." Wait out the few initial stages. After a while, we move from the tropics to a desert straight from Mad Max and gradually begin to notice the novelties prepared by the developers.

About this stage in the game, we get to lay our hands on the new mechanics. However, they didn't come out of nowhere, and certainly not from some brainstorming conducted by the American studio. All these ideas can probably be associated with other platformer games; the first one to spring to my mind was the indie game Celeste. I wouldn't call it a brazen theft, rather a creative reinterpretation. But we live in the postmodern era, in which Quentin Tarantino, is considered one of the best, and certainly the most successful, directors, in spite of his work being strongly derivative. 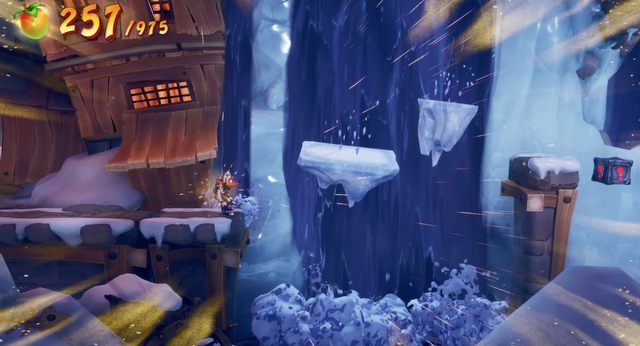 But let's delve too much into cinematography and go back to the most important changes in Crash 4, because these make the game smoother and, most importantly, more appealing. So we have the standard gravity reversal, allowing you to jump from floor to ceiling with a single button. We can also turn into a purple tornado spinning at whooping speed, able to fly cover distances at the expense of balance on often unstable ground. We can also slow down the environment around us, allowing for the use of moving surfaces as temporary platforms.

To me, all these temporary "skills" remind me of the superpowers from the third Rayman. In both cases, they have been adapted to the overall style of the game and hint in some ways at the strategy we need to take for the next couple (or couple dozen, if the stage is difficult) minutes of the adventure.

They're not particularly impressive, as none of them are truly revolutionary. Still, I had a great time using the new mechanics – they simply make sense. This is not the Harry Potter and the Deathly Hallows casus, where the creators introduced the ability to fire a wand like a machine gun out of the blue. There was a lack of coherence and logic in that case, whereas the developers from Toys for Bob transfer other people's ideas into their game with such freedom and feeling as if they were their authors.

The authors also made sure you can play Crash with your friends, and in the most classic form that harks back to the elementary school days and the days spend playing Heroes of Might and Magic III with your gang. Everything happens through a single controller, and players have to wait their turn.

This applies both to the story mode, in which the controller is passed on to another participant after each death, as well as to the new mode – a simple multiplayer based on achieving the best time on the given stage. Extras are modest but welcome.

That's not all, of course. We have familiar sequences that force us to move constantly and reward good reflexes, as well as separate levels where we can play other characters. And yes, there have been some excesses in previous parts, such as playing as the series' main antagonist, Doctor Cortex, but here, these stages are the norm and appear regularly. To be clear, they involve not only changing the character model, but also a range of other basic skills. 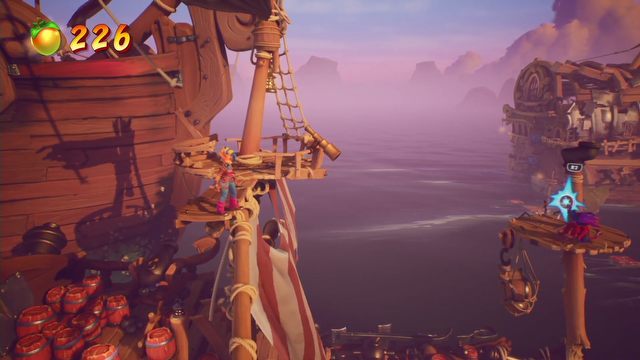 Each character requires a different approach.

The aforementioned dwarf villain has a laser gun that turns opponents into stone and jelly, Dingodile is a massive lizard wielding a box blower and insects of all ointment in his hand, and Tawna Bandicoot, or Crush' crush, can boast some serious dexterity and a Just-Cause kinda hook.

I have to admit that each of these characters felt very different to me, but definitely not unpleasant. Avid fans can also control Coco, what's more – she is one of the two main playable characters, but it is a matter of our choice, as she has the same set of moves as Crash.

According to our users, Crash Bandicoot 4: It's About Time for PS4 was a disappointment - the expectations before the release were higher than the current average user score.