Discovery is in our blood. Even if nowadays many of us would rather spend their evenings in front of a TV screen or go out, there are still people in whom some untold yearning awakens every time they gaze upon the stars or the choppy sea. What can such people do in this world, where blank spots on maps have been once and for all filled with satellite pictures; where every patch of land can be scrutinized in Google Earth? One of the possible escapes is Diluvion.

Why the grumpy title, you wonder? This game has been founded on Kickstarter and developed with publisher’s support; the limited budged is, unfortunately, conspicuous.

If, however, you’ve a particular affinity to Julius Verne’s books, and your heart rate increases at the briefest sight of steam/diesel punk accents that have all the seeming of Disney’s Atlantida or Treasure Planet, then you can feel at home. That is, if you’re comfortable living at the bottom of the ocean.

Across sandbox-meadows measureless I go… 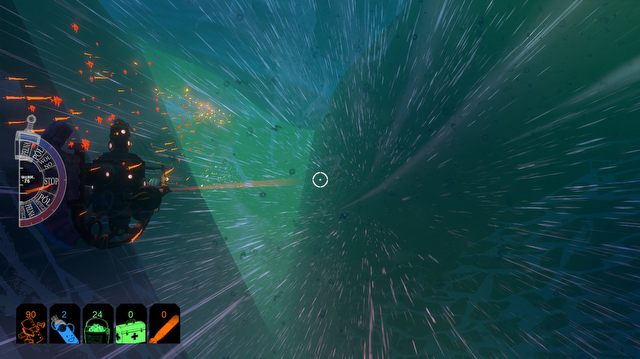 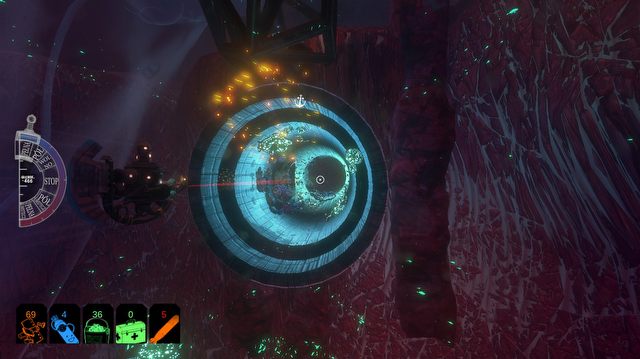 Diluvion is a quasi-sandbox survival game with simple elements of strategy and a pinch of RPG, in which you command a submarine. You roam the seabed looking for loot; upgrade your ship and – in time – your headquarters; you trade and discover new places and secrets of the submerged universe. You will also tango with other crews – mostly pirates crammed in their own vessels similar to yours. From time to time, though, you’ll face much bigger fish.

As regards the survival layer, you need to make sure there’s enough oxygen and food. Both of these resources are steadily decreasing – the more mouths to feed, the more rapidly the reserves shrink. Those are admittedly very simple mechanics, but they diversify the experience.

The game by Arachnid Studios takes us to a world in which gods have punished the mankind with a great cataclysm, then exiled the survivors into the depths of the sea and sealed the surface with an immense ice dome. All hope is not lost, however, because according to a legend at the very bottom of the ocean one of the deities had buried something that can help humans get back to the surface… And in the meantime? Well… humans are a species that adapts quickly. Cities and research stations are soon built at reasonable depths, and adventurers embark on all sorts of different ships and vessels and are now roaming the vast sub-marine universe looking for fame, loot and trouble. Just like us.

We play the part of an inexperienced captain of a shabby old submarine, who’s surveying the ocean floor in search of anything useful. The goal is to evolve from prey to hunter, but the beginnings are never easy – only one officer on board, and an unfortunate expedition that we barely survive. We become involved in an unassuming, picaresque story that references the mentioned Disney movies, albeit is a little bit more depressing and at times more lurid.

Later on, a couple of officers joins the fray (apart from them, the player also hires low-rank crew, however they don’t influence the story that much). Each of these characters comes with a certain background, and their personalities are sketched rather neatly. The thing is that the whole concept doesn’t make nearly as big an impression as it would had the main arc been given more attention. A couple of more engaging dialogues would certainly help to form a stronger relationship with the crew, giving more gravity to the most important moments of the game. Unfortunately, in the current shape, this is just a nice – if half-baked – story. 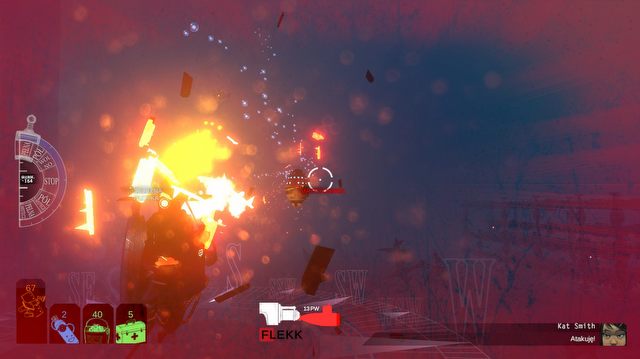 Sometimes there’s no other way.

The game compensates for these shortcomings with its setting and atmosphere, however. The surreal ocean can sometimes be quite intimidating, especially when one ventures away from human habitats, and fantastical buildings are substituted with ship graveyards and… well, let’s say that people with arachnophobia might have a hard time at one point.

The steampunk aesthetics permeate the whole game, with the characteristic gears, dials, cylinders and Victorian ornaments, oil and rust. The vessels look like hybrids of kettles and marine predators (with a couple of examples definitely lopsided towards the kettles). Some of the locations are outstandingly well done, and visually, the game could have made a great impression if the animations were more detailed (or if there were any animations at all, some might want to argue).

When the player decides to dock somewhere or check the ship’s status, they’re taken to a 2D view. The backgrounds and characters aren’t bad – which cannot by said about the way people move, or rather jerk; it looks utterly horrible and can ruin the atmosphere. If you remember The Banner Saga, this will make you weep. It’s the first element that’s visibly burdened with the game’s low budget and – unfortunately – no the last one. 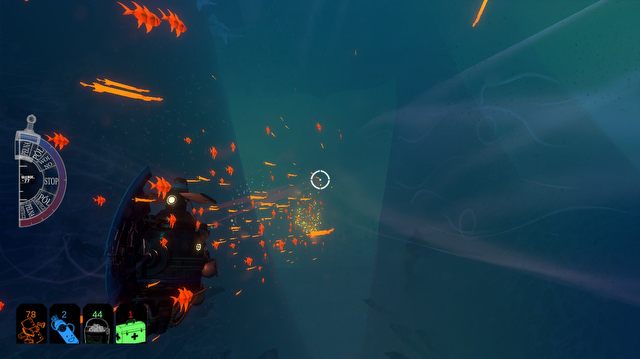 There aren’t many games about underwater voyages nowadays. There’s even fewer games that are not so dead-serious and realistic about this. It’s easier to find a game about flying saucers, indeed. So, if Deluvion managed to drum up your interest in this matter, I recommend the good ol’ Aquanox. It’s also an underwater shooter with a post-apo flavor, although it would be easier to compare it to Mad Max than to Disney’s Atlantida.