With a name like Medieval Dynasty, you may think you are getting a game featuring epic battles fighting for the throne of powerful kingdoms. But in fact, what you get is quite the opposite. Yes, you will be building a dynasty of sorts, but as a commoner of a lowly village, so your actual deeds are a lot less glorious by comparison.

Chopping down trees, hunting for food, and even bathing yourself are some of the things you will be doing in this humble yet engaging survival game. Its mix of resource and people management also lets you be the boss of your own, budding village. Not without its share of problems, the good ultimately outweighs the bad in this relaxing title.

The joys of survival

At its core, Medieval Dynasty requires you to survive through the years and use your resources to your advantage. By default, each season consists of three days and each day can last around 30 minutes, but you can customize these settings at the start, allowing you to shape the game to how you want to enjoy it. How you make the most out of each day is also up to you: you can focus on gathering resources, completing tasks for villagers in various neighboring towns, or crafting tools to your heart’s content. 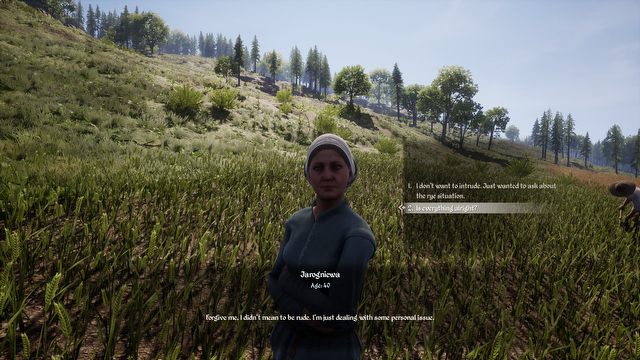 Every action you complete rewards you with experience that unlocks more skills in that category. For example, the more trees you chop down or rocks you mine, the more skill points you will get to improve your extraction ability netting you perks like more experience, extra resources, or faster speeds. It’s a simple system, but it works in your favor and benefits the tasks you do the most.

Besides just gathering resources for survival, you also have to worry about your character’s overall health and stats. In the colder seasons, you need to remember to craft or purchase warm clothes or suffer hypothermia and eventual health loss. If you leave food out for too long, it will spoil, and eating it will inevitably poison you. Its survival component is executed effortlessly and adds a level of strategy that forces you to juggle your various tasks while ensuring you don’t end up dead. 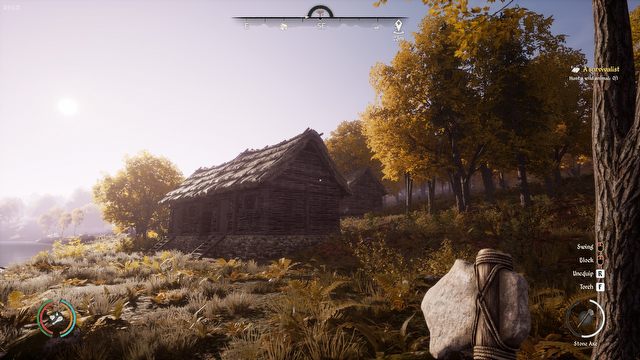 A simple backstory sets up the game and introduces you to your character, a young man named Racimir who recently escaped a war in his village and sets out to search for his distant uncle for aid. It turns out that his uncle is no longer alive, but due to family ties, Racimir is granted land to build a life for himself. Its story does its job of settling you in, but don’t expect it to wow you with twists and turns.

What’s more, the game’s loose lore is just there to introduce you to the game’s mechanics early on, and for that it achieves its purpose. As you start your adventure as a ripe 18 year old, you will take on quests that will introduce various ways to make a living – craft a knife, build a garden, set a trap, and so forth. These early quests hold your hand and help you navigate your early years, but soon grow repetitive over time. 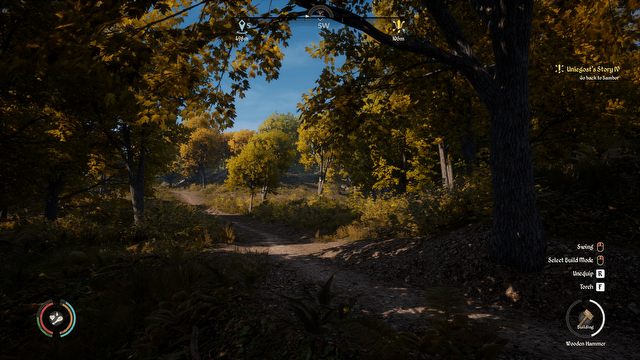 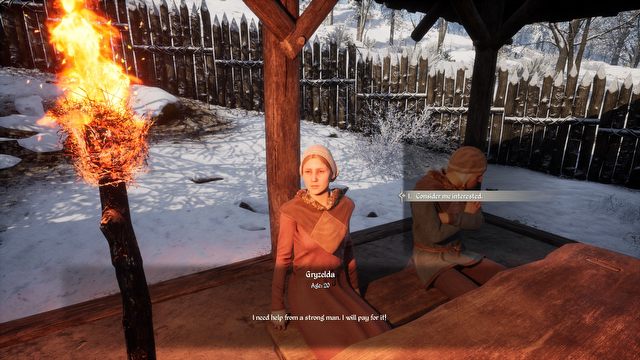 Once the magic wears off, these quests become monotonous and feature uninspiring conversations with NPCs who lack any sort of personality. You will soon grow tired of hearing about the exploits of your uncle’s band of friends and reading through paragraph after paragraph of stories that don’t really add to your overall experience. Some greetings and phrases are cleverly voiced, but the rest of the game isn’t making reading through lines of text any fun.

What also hurts these quests is that most of them simply require you to travel to one village and then back to another one. This not only becomes repetitive over time, but it also takes its toll on your character’s overall health. The world map is quite large, so it’s frustrating spending half a day trekking to a village to continue a quest only to find out you need to come back the next day for the next step in completing it. Even after you get a speedy horse, you may question whether it’s worth completing a quest at all, considering the expense at which it comes. 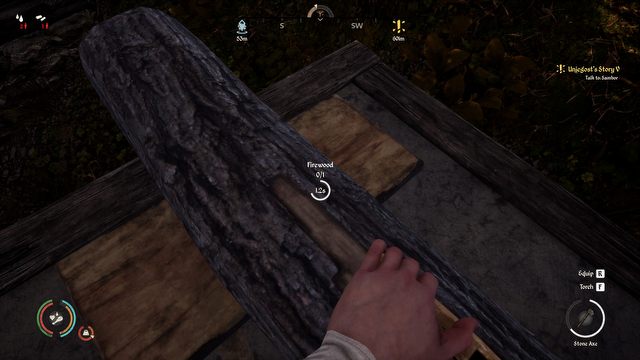 The game also suffers from other issues that distract from what makes it fun. For instance, there is an “unstuck” command in the menu in case you happen to jump and land somewhere you shouldn’t. This will happen often and makes you wonder why it wasn’t ironed out in the first place. Its character models also leave something to be desired, as most villagers just stare into the distance, void of life and never interacting with one another. 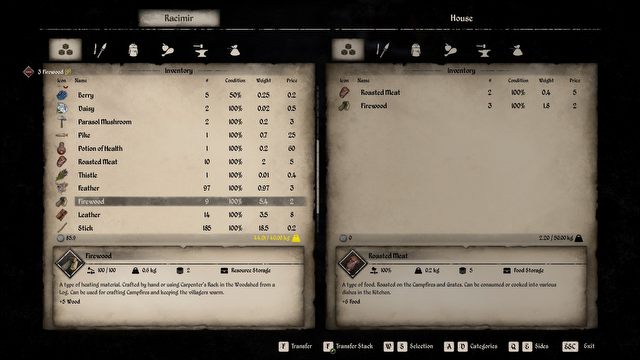 Equipping and unequipping items can also get irritating, as the game will sometimes remove items you need to continue using. Emptying a bucket full of water, for instance, removes the bucket from your hands forcing you to back into the menu to equip the same, albeit now empty, bucket again, and fill it up with water each time. That’s a whole lot of work just to take a bath.

Despite these shortcomings, the seasonal landscapes you will travel through have their own unique splendor and uplifting aesthetic that truly makes you feel as if the whole world was your playground – and it definitely is. Even choosing where to plop your first home is a big decision, and you can spend hours wandering around the lush forests and fields searching for that perfect spot. On top of that, its soundtrack and sound effects also provide the perfect accompaniment to your day-to-day activities. 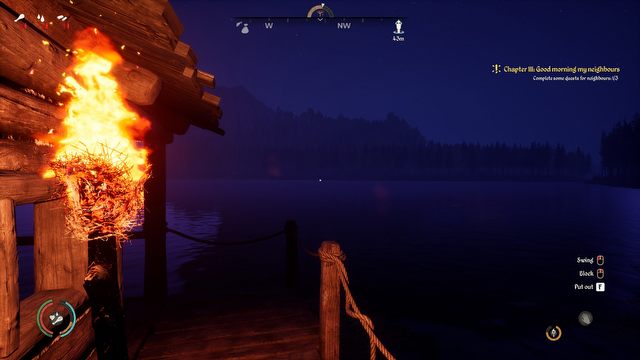 Despite its flaws, its building mechanics and overall management system are what will keep you coming back for more daily adventures. The underlying goal of Medieval Dynasty is to build your own village and establish a family, and the game gives you many toys to play with to achieve just that. Not only is it fulfilling to build your first house out of the raw materials you just spent a few in-game hours gathering, but it feels even better building multiple homes and recruiting villagers to move in.

You can essentially become the mayor of your own town and decide where they will live and what they will do. Make them work the woodshed or make them tend to your cattle. Every choice is yours to make, but with that also comes the responsibility of ensuring your villagers are happy and well-fed. Some will even leave if you aren’t meeting their needs so you have many tasks to juggle which add to the surprising dynamic variety the game offers.

Medieval Dynasty won’t reinvent the wheel of the survival or resource management genres, but it will give you a relaxing and low-key experience you can customize to your liking. Its story and UI set it back from truly shining, but its focus on building a village and surviving through the seasons will keep you coming back for hours of simple entertainment. 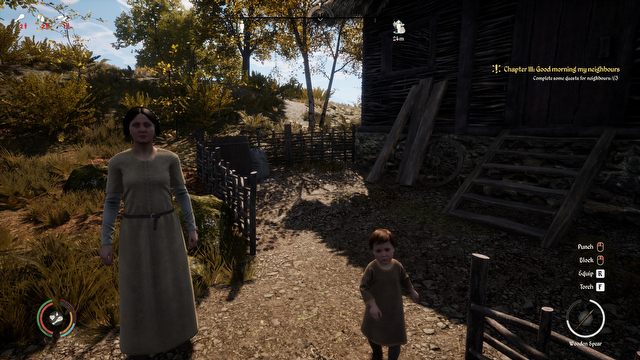 Every day can bring new problems or surprises, and the game offers you plenty to do at your own pace. You don’t need to complete all the quests right away and can save them for future dates or seasons. Your character ages as the years go by, so you will die at some point. How you get to that endgame, though, is totally up to you. Wooing a girl to make her your wife and having a baby together is one way to “beat” the game as your legacy (and progress) will live on after you die, but there is no right or wrong way to enjoy the journey. Its final destination is entirely up to you.

And that's ultimately the alluring part of Medieval Dynasty that might keep you engrossed for literally hundreds of hours. It’s a low-key game that allows you to go at your own pace, but offers enough challenges to keep you engaged. It doesn't reinvent the survival, or management genres, and its story and UI may leave you slightly irritated. It will, however, give you a rewarding experience you can tailor to your liking, and enjoy it how you want it.

According to our users, Medieval Dynasty for PC was a disappointment - the expectations before the release were higher than the current average user score.