Resident Evil 7 was both a departure and a return to a series known for its survival horror roots and emphasis on exploring unknown, uncomfortable environments. It felt like a Resident Evil game because of its themes, characters, and subject matter, but it also felt different since you saw the world through a first-person perspective in a more linear adventure.

A few years later, Resident Evil Village continues this format but refines it to make it work in its new setting. It’s a sequel that lets us revisit the protagonist’s story and steps more in the right direction encompassing the essence of what made the original games so much fun in the first place. It’s a survival horror that offers a rich blend of action, supernatural moments, and classic suspense that ultimately work to tell an enthralling scary story. 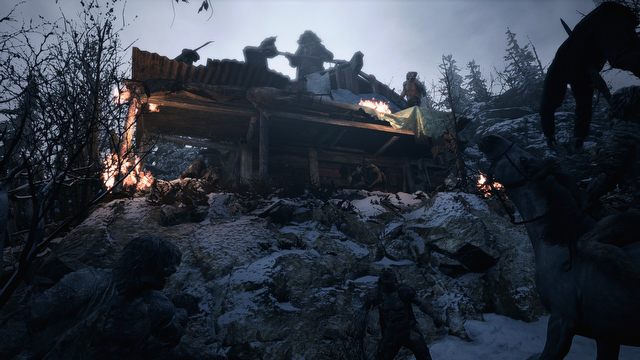 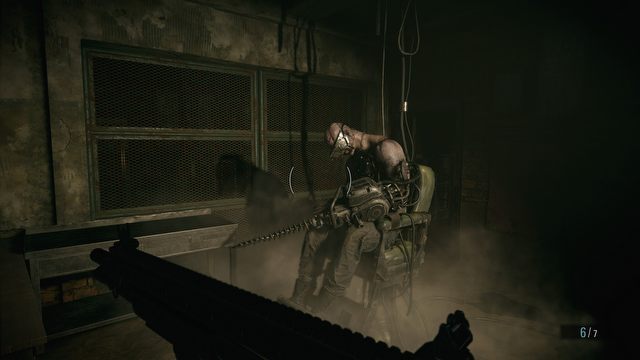 In the previous game, Ethan was searching for this missing wife; he now ventures through a snowy European village in search of his kidnapped daughter. The village serves as the hub of the game uniting four separate regions you will need to eventually visit. Without spoiling things too much, let’s just say the main objective will require exploring each of these surrounding locations, obtaining key items, and moving towards the next goal. It’s more linear than previous games, but each region’s impressive and unique setting easily make up for it.

In fact, you will notice right away that this is a very different Resident Evil as it does not rely on previous tropes like zombies or jump scares to elicit feelings of fear or terror. Yes, there is gore, blood, and even a very a disturbing sequence where you need to hide from a grotesque, wailing baby. But more so, Village draws inspiration from classic horror motifs of vampires, werewolves, and evil ventriloquist dolls to create an unsettling ambience throughout each region you visit.

Particularly walking through a field lined with scarecrows only to realize those are actually corpses propped up on sticks was very surreal and disturbing. It’s also very unsettling to walk past a dormant body with a drill for an arm knowing he may wake up any second. Village’s scares are subtle, and you will be surprised how frightening daylight can be, as most of the story takes place during an overcast day. You don’t just need dark corridors, caves, or monsters hiding in shadows to get riled up (and believe us, these are in the game as well) as the game’s artistry works to effectively deliver a creepy, mysterious, and ultimately chilling experience even when there is no immediate threat around you. 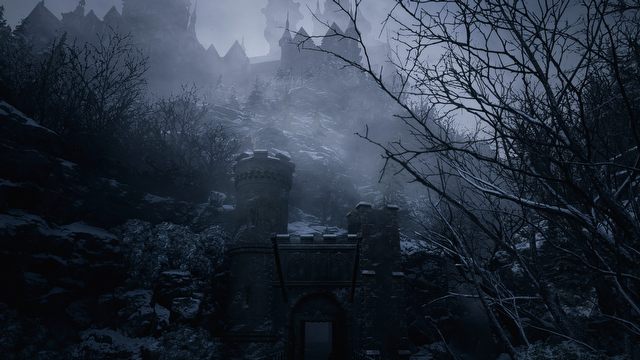 Each region is also designed to offer a unique gameplay experience and feels very different from the other. The castle, for example, feels very much like the mansion from the original game featuring locked doors, secret entrances, and rooms you will need to return to once you find the necessary key or item. It’s akin to the original games and feature enough action and suspense to keep you guessing what happens next. The next two areas lean more towards exploration or action, respectively, and the final region is a mix of the two. Because you can only access them in a set order, each region offers its own unique play style and helps set the pace for the game’s narrative separating action-packed fights from moments of calm. 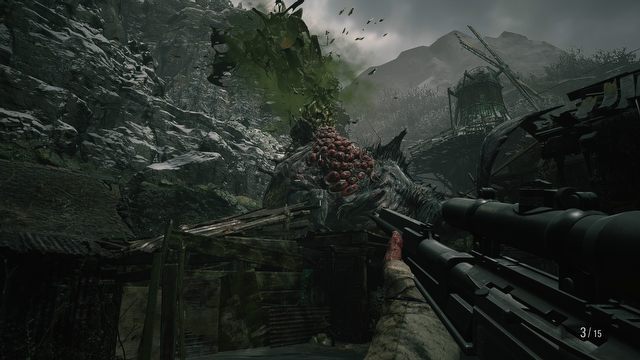 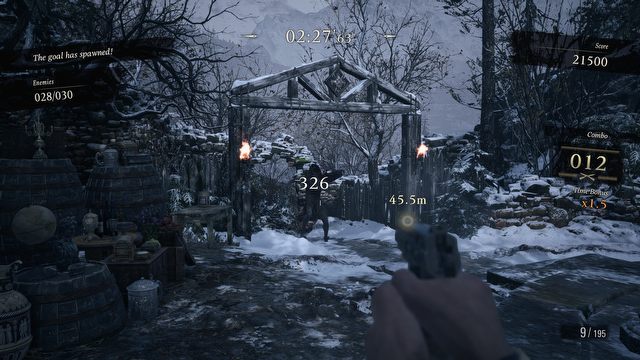 Enemies are also uniquely designed and have their own weaknesses for you to exploit. The game’s puzzles are pathetically easy to solve, but fights with some enemies and bosses essentially replace them as you will be racing to figure out the best way to approach them. Subtle ambient scares aside, these moments are ripe with thrills as you will need to keep moving, dodging attacks, and shooting hoping they go down eventually. If you took your time, the game will surely incentivize you for exploring your surroundings as certain documents provide hints to their weaknesses.

Gone is the item box from past games and your inventory system now separates key quest items from your regular weapons and survival tools. This helps eliminate the burden of not picking up a certain item in fear you may not have space to use it later, but it also speeds up your own actions as you play. And because the pacing is spot-on, the gameplay feels balanced and not too fast, nor too slow.

What are you buying? 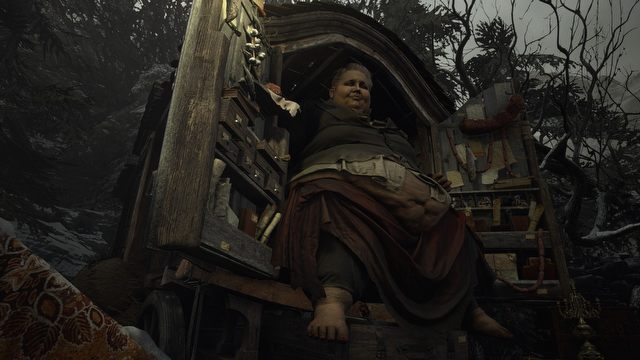 Returning from Resident Evil 5 is the ability to upgrade and purchase better weapons during your playthrough, letting you outfit Ethan with the guns that make it easier to take down the heartier (hint: armored) enemies dished out in the later levels. In fact, if you want to increase your chances of survival, you may want to read your map closely to discover treasure and other goods you can find to sell to the game’s jovial merchant.

It’s a system that rewards you for taking risks as some of the treasures and items you want are in areas you need to revisit, or offer some challenging enemies to defeat. It forces you to decide if you want to risk your health and ammo for treasure that will eventually let you upgrade your weapons and do more damage in the long-run. Plus, you can also unlock additional weapons and other goodies that make subsequent playthroughs on higher difficulty modes a lot easier so, the rewards really do pay off.

In addition to simply upgrading your weapons, you can also boost Ethan’s prowess by increasing his health, defense, or other stats by cooking certain dishes that require key ingredients. Just like with your weapons, some of these ingredients will require you to search your surroundings a bit more to locate that prize fish you need for a specific dish. These optional RPG elements are welcome and allow you to adjust the difficulty to how you want to play as well, since you may need that extra help in certain areas depending on your play style. 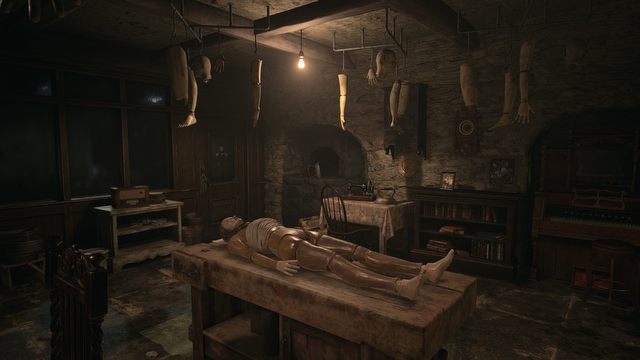 While the main game could last you around 10 hours, finishing it unlocks some extra goodies such as the arcade-style Mercenaries mode. This time, you can play through a set number of levels in an area and have time to replenish your supplies or upgrade gear before heading off to the next level. Your cumulative score in each area can help unlock new areas to play or reward you with completion points to unlock art work, figures, and even main game weapons. 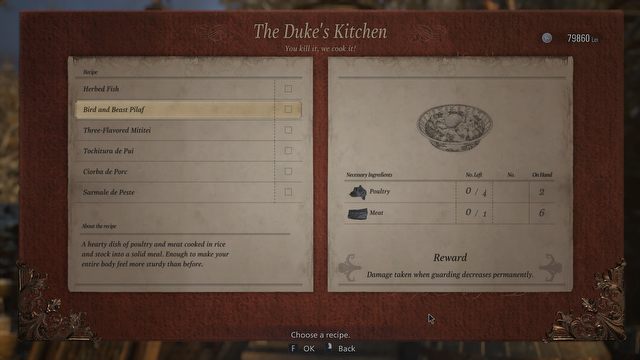 This mode is known for its quick bursts of action and this version also lets you customize your experience even more with additional upgrades you can collect on each level. You can choose to focus on headshots, health restoration, speed, etc. and play around with ways that work for you to outperform yourself. This helps make each Mercenaries game different and is sure to keep you coming back for more.

Resident Evil Village offers elements of past games in a cohesive package that ultimately works. It encourages exploration while focusing on action but also highlights sensory thrills to elicit fear even when you are completely alone. It’s a linear game that introduces some RPG elements to allow you to customize your playthrough keeping you hooked until the credits roll. And, by all means, watch the opening and closing credits in full. They bookend an experience that is a treat to watch and even more satisfying to play through.