A game which isn't a game

I monitored myself with curiosity  it was like a change of wind on the open seas. I was becoming someone else, and I wondered who that would be.

And here lies the essence of Wonderlust, it's main power, but also it's main weakness. Since this is a review of a game on a gaming website, I should mention that apart from fantastically written dialogs, great pictures (taken from the personal collections of the developers and other travelers), and awesome soundtrack, the game from Different Tales also features some systems typical for video games. We have the choice and consequence mechanics, we have limited money, as well as constraints of time, energy, and mood. Depending on the decisions we make, we end up doing different things, time goes by, and the mood improves or worsens. 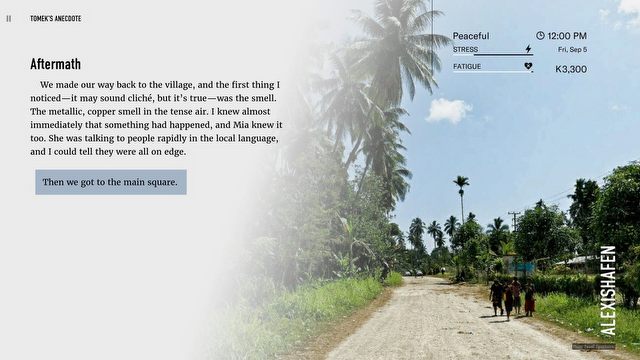 Apart from the four main stories, Wanderlust also has a few shorter (around 15 minutes) stories with different morals.

It sounds like a video game, but in actuality, all the resources and constraints don't really matter  it's not about getting to the other end in the best mood, or spending your last cash on gourmet food (which probably isn't possible, since I was spending money left and right, and still had plenty of dough in the end). Regardless of whether or not your character is tired, happy, or sad, some paragraphs will still be different, constituting the story nonetheless. Many choices are time-limited, but I never really felt any pressure. Rather, I focused on what my character thought they were doing at the time, and asked myself what I would do in the same situation  would I go to bed late in the evening, or still try to visit the city? 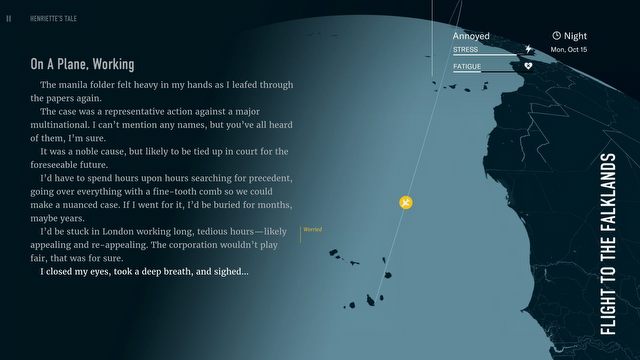 You can see the time and fatigue counters in the top-right corner of the screen.

Wanderlust has much more in common with literature than video games. It uses some mechanics known from other games, which makes it seem more interactive, but in the end, if you give it a chance  and I believe you should  bear in mind that it's all about the story, not right or wrong choices. There are no good or bad decisions.

If you really wanted to call Wanderlust a game, it certainly is a game of feelings, dreams, and memories, which all constitute the subsequent chapters of the journey. For me, this was more of an interactive recounting of journeymen and women  stories that helped me relax after work.

To appreciate the game of the Polish indie studio, we needed particular sensitivity of the same sort as tireless fans of visual novels have. And though I'm not really a member of this lot, I appreciated a good read and a good story. 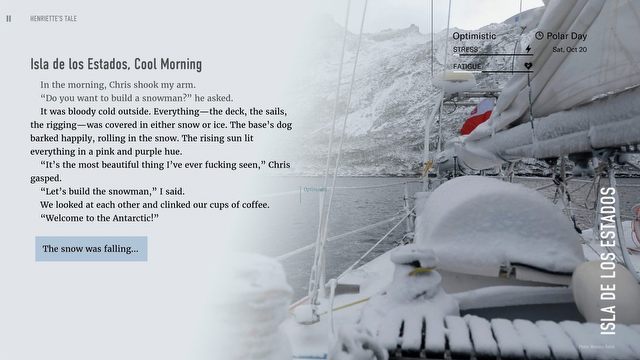 The Antarctica story is a great, well-crafted tale.

Indie game dev is characterized by some unusual features. One of the things indie developers are great at is taking completely un-sexy ideas, turning them into great games, and building communities around them. I firmly believe this is what will happen in this case.

Wanderlust is a must-read  it's not going to join the canon of literature, you won't find it in university curricula, but if you allow these tales to your room, they'll certainly make it worth. Hopefully, this will be a point in case that reading and literature aren't dying, just transitioning into a different medium.

I played Wanderlust for around 18 hours. The first time I saw the game was in Warsaw, where I visited the developers. A big part of my life was devoted to literature, so you could say I'm inclined to games like this one.

We've received a review copy of the game from Walkabout Games, the publisher. Thanks!