Warhammer 40,000 is a fascinating phenomenon. The enormous, dystopian world, ravaged by eternal conflicts, is ripe with decay and decadence. The humans sacrificed their freedom of thought and belief at the altar of safety, brought to their knees by the God-Emperor. However, that’s just the beginning of the story, since the deity in question is actually the lesser evil – there are other powers at play here, eager to put their hands on mankind: the orks and the Chaos itself. We could become familiar with this world thanks to books, tabletop RPGs, and a couple of games, like the Dawn of War cycle.

The core of this universe are of course battles of figurines. Warhammer 40,000: Sanctus Reach fully embraces this part of its heritage by focusing mainly on combat. And it takes no prisoners.

Straylight’s game is a turn-based strategy, in which we wage battles on enclosed maps. The idea is quite simple: select troops and head into combat to teach the Greenskins some good manners. Plot? There is such a thing, however the game is rather economical with the story – still, it matches the setting well and is sure to satisfy the taste of Warhammer fans. We assume command of Space Wolves, a unit of space marines, who are doing their best to repel the ork invasion. This story is presented in an old-school way – as text briefings before missions. It’s more of an exposition than narration… and not particularly exciting, to be honest.

Familiar heroes appear on a couple of occasions during the campaign – for example the leader of the Space Wolves and his adjutants – but for casual players they will simply be “some stronger units”. So if you’re looking for even the slightest bit of engaging story as incitement for combat (because you still can remember the thrill of Disciples 2 or Jagged Alliance 2), you may encounter an obstacle – resorting to imagination will be the only solution. Fortunately, this quickly ceases to annoy. 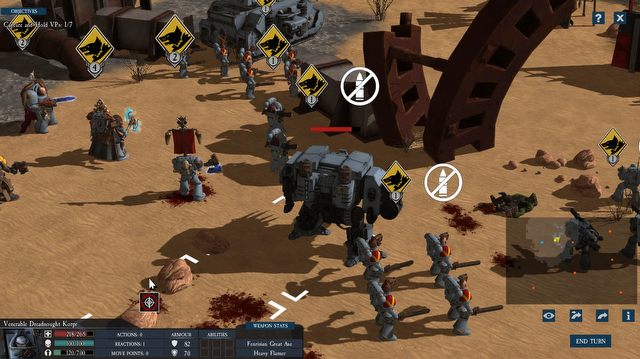 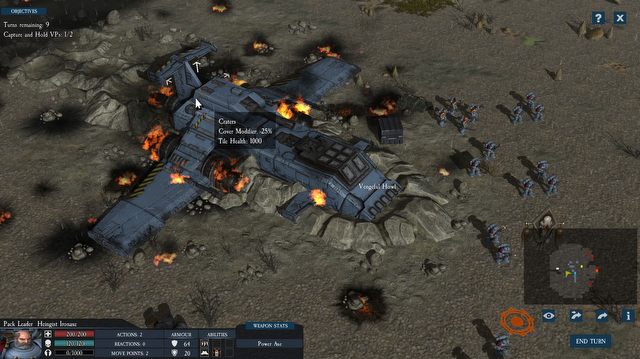 The story in Sanctus Reach is a fun addition only for the enthusiasts of the franchise. The plot background is sometimes reflected via special objects on the map, such as a burning, shot-down transporter, whose crew managed to miraculously escape. However, the essence of the game are clashes of the heavy-armored imperials with hordes of bloodthirsty Greenskins. And this element works very well indeed. Players control infantry, vehicles, mechs and sometimes air units. The mission objectives are mostly limited to defending or conquering territory, but some diversion emerges from time to time as well. There’s no trace of Total War-ish diplomacy or economy, however – you can only hope for carnage in the name of the cause. 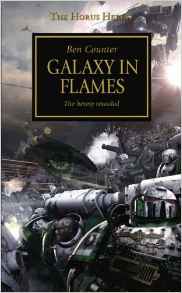 Warhammer 40,000 is a very complex universe with incredibly rich mythology. If you want to get familiar with the setting, you should try the fan-powered Wiki or the books describing the most important moments in the history of the world of Warhammer.

Sanctus Reach can boast a sizeable number of various units within each available formation – which is one of the ways the game employs to keep us entertained. The infantry alone consists of a variety of shooters: fighting at different ranges, using various weapons, lasers, flamethrowers, and even swords, should things require a more direct approach. Add to that the powerful commanders with their special skills that can turn the tide in your favor. Some can rally friendly units, others are able to launch area attacks or heal troops.

The battles are long (I mean it – completing certain missions can take a couple hours) and require patience, wits and planning many turns ahead. If you really mean business, you will spend a good few hours on a single session. Some battles are really difficult, but not to the point when you could feel cheated by the game; on the other hand, victories are satisfactory, and in case of defeat, it’s not very difficult to realize the critical mistakes you made.