Warhammer 40,000: Sanctus Reach for PC is a turn-based strategy game, developed by debuting studio Straylight Entertainment and Slitherine, known for many other productions of the genre.

Like almost all the games set in the popular universe created by Games Workshop, Sanctus Reach for PC takes place in the 41st century, during the incessant conflict between many races. In the story campaign, you lead one of the many orders of the Space Marines, Space Wolves, and try to resist the devastating orc invasion, who gathered for a big Waaagh!, led by Grukk Face-Ripp. The orcs manages to conquer almost all the planets of the eponymous star system, and humanity's last stand in the planet Alaric Prime; this is also where the first mission in the campaign begins.

Warhammer 40,000: Sanctus Reach features two singleplayer story campaigns, consisting of about 50 missions and battles. In all of them, you control the Space Wolves forces, choosing from 30 varied units, both standard, such as the Space Wolves troops or the Predator Tank, and unique ones, such as the legendary members of the order, including the Space Wolves master, Logan Grimnar. There are also other battles to fight, against armies controlled either by AI or another player in the PBEM+ mode. During those, you can lead the orc forces, also consisting of 30 units, including the powerful Gorkonaut.

The in-game battles are turn-based, although the pace is more hectic than in other games of the genre. It is important to use tactical maneuvers (such as flanking) and make use of the topography. The units can be leveled up, both in the campaign missions and single battles. 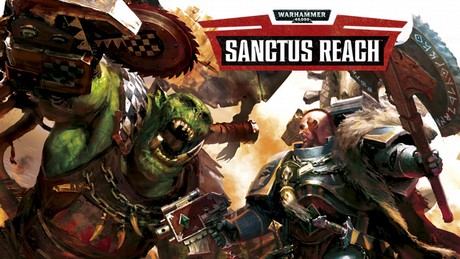 Remember the human chess game from Harry Potter? If you've always wanted to play its Warhammer 40,000 equivalent, now is your chance, coming in the form of Sanctus Reach published by Slitherine.