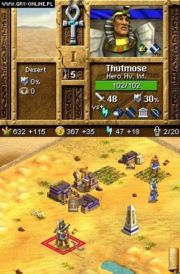 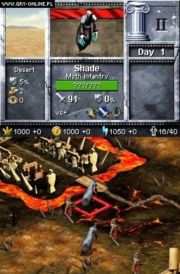 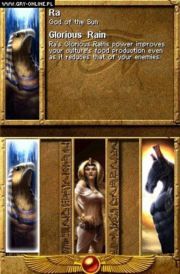 Age of Empires: Mythologies is the next to Age of Empires: The Age of Kings, a strategy dedicated to Nintendo DS, referring to a series of well-known computer RTSs. However, the game in editions, prepared with the handhelda in mind, takes place in rounds.

Of course, our main task is to expand the city, recruit better and better units and then lead them to battle. Just like in the PC case, also here we take control of three ancient nations - Greeks, Egyptians or Vikings. As the title suggests, Mythologies is not a faithful representation of the former realities - instead, it refers more to the beliefs and legends of those cultures. Thanks to this we can play the role of one of the brave heroes such as Perseus or Ramses, who are not only the most powerful units on the battlefield, but also able to support their people in economic aspects. In addition to the standard army, powerful mythical beasts set off for battle. It is also worth taking care to give due reverence to the deities, because in return they reward us with their power.

Apart from three campaigns for one player (one for each nation) we can take part in extensive multiplayer battles via Wi-Fi. In addition, we have the ability to adapt to our own needs the rules on which we want to compete.

It is noteworthy that Mythologies was developed on the improved Age of Empires: The Age of Kings engine. Graphic design and Artificial Intelligence of the opponent have improved, among others. On the top screen of the console are presented all the statistics, while on the bottom screen we observe the actual game.