Assetto Corsa Competizione is the successor to the 2014's racing simulator titled Assetto Corsa. The game was developed by Kunos Simulazioni and is the official video game based on the license of Blancpain GT races organized by SRO Motorsports Group.

Assetto Corsa Competizione, similarly to its predecessor, is a full-fledged simulator. The developers tried to do their best with representing the Blancpain GT races. The vehicle handling system is affected by multiple elements  from traction and electronic stability control through suspension and engine to machine's aerodynamics and current weather conditions. All the elements have been developed based on the data gathered from real cars. The game allows players to adjust some of the elements, including the artificial intelligence level and vehicle handling, allowing less experienced players to make playing easier.

Assetto Corsa Competizione delivers cars of such brands as Ferrari, Lamborghini, and McLaren. Since the game is based on an official license, players get to drive on real tracks, within actual teams and competing with real drivers.

The game offers several diversified single player modes. One can enjoy the elaborate carrier, participate in championships and special challenges, as well as try out the Free Play mode. Moreover, the game also features a multiplayer mode with a special ranking system that grades individual skills and their behavior on the racing track. This is how the developers want to promote fair-play rules.

Assetto Corsa Competizione is based on the popular Unreal Engine 4 technology, which allowed the developers to translate famous tracks and vehicles into the game with details. Moreover, the game features also beautiful weather conditions and drivers who act in a very realistic way. Their movements were recorded during motion capture sessions. 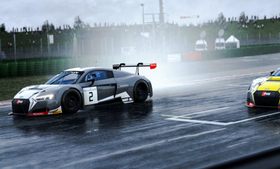 The racing simulator Assetto Corsa Competizione, which made its PC debut last year, will be released at the end of June on Xbox One and PlayStation 4. With the launch of console ports, the developers also plan to release new DLC sets for all supported platforms.