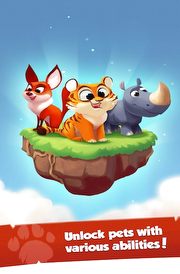 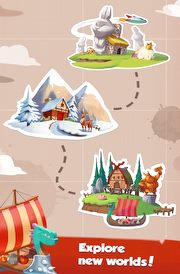 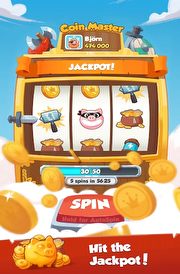 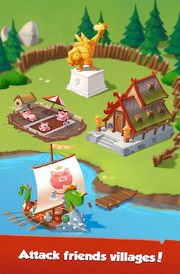 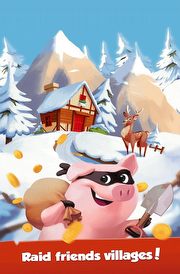 Coin Master is a simplified, mobile strategy, with strong emphasis on elements typical of games of chance and card games. The game allows players to develop their own Viking village, as well as attack other towns created by the computer or players. The Israeli company Moon Active is responsible for the development and release of this title.

In Coin Master, we earn money and build our own village, then defend it and attack other towns. The funds are collected using a game of chance resembling a classic "one-armed bandit" (we can only do it a few times, and then we have to wait a while until the system resets or buy another "spin" in the store). We can also gain additional wealth through attacks on other players villages. The main goal is to have the most developed and treasure-filled place possible.

The production also allows players to breed an animal - there is a choice of tiger, fox or rhino. Each of them allows you to earn additional coins in a slightly different way. The animals can grow and increase rewards for the various activities in the game. They can also be propagated (they lay "eggs" from time to time). Importantly, if we want to use the benefits they provide, we must feed them so that they do not fall asleep.

In addition, as the game progresses, players collect cards. We gain them both through attacking and results in the game of chance. Once the entire collection has been collected, they offer additional bonuses (e.g. "spins" or experience points for a pet). Cards can be sold to other players for coins, and the rarest of them are a real treasure that users boast about on forums and groups on social network.

In Coin Master, we can play alone or with others. In single player mode, when destroying a village we move on to the next level (there are over two hundred of them in the game). In turn, within the online multiplayer module, we have the possibility to attack towns built by other players or cooperate with them.

Coin Master has a very simple, two-dimensional graphic design. The game uses cartoon style, typical for many other mobile titles.

Coin Master game was released in a free-to-play model. In the game , we will also find a micropayments.