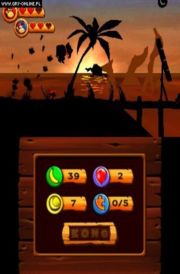 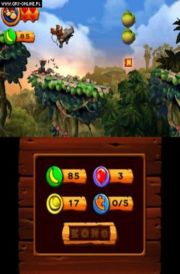 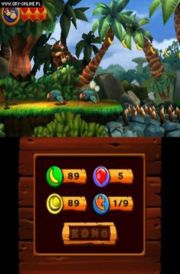 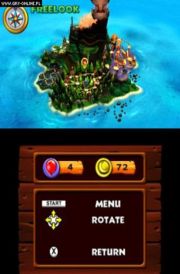 Donkey Kong is making a triumphant return, along with his trusted sidekick Diddy Kong, in a brand new side-scrolling platform game from Retro Studios. Donkey Kong Country Returns, for the Wii system, has all new levels and all new chest-pounding challenges for players of all ages. The game takes inspiration from the original Super NES series, from barrel blasts to mine carts and then builds upon it by adding stunning graphics and new layers of depth to the world and game play. Donkey Kong Country Returns features the first ever simultaneous cooperative game play mode for the series allowing both novice and skilled players to actively play and experience the game together. Run, jump, climb and defeat enemies through diverse environments until you retrieve Donkey Kong's stolen banana hoard!

Feel the power of Donkey Kong by shaking the Wii Remote and Nunchuk to perform Ground Pounds, Barrel Rolls. These moves can be used to destroy blocks, defeat enemies and reveal hidden areas. Donkey Kong also has the new ability to climb walls and ceilings.

Diddy Kong has a few new tricks of his own. He can use his Barrel Jet to hover high above the ground or defy gravity and fly across small chasms. He can also help Donkey Kong with this ability by hopping on to Donkey Kong's back. In two player mode, a quick shake of the Wii Remote will give him the ability to fire his Peanut Popgun to assist Donkey Kong.

The levels in Donkey Kong Country Returns are beautifully rendered and creatively designed with lots of hidden items to discover. Try to collect all of K-O-N-G Letters and hidden Puzzle Pieces in each level to unlock something special.

In cooperative mode, players of different skill levels can play through the game together.