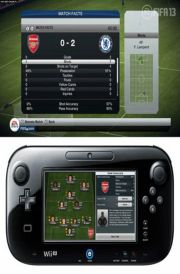 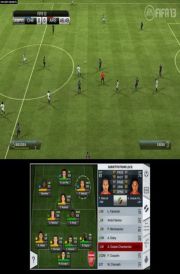 FIFA 13 is another installment of the most popular football simulator developed by Canadian EA Sports Studios. Just like the previous games, this one also went through a number of significant improvements that affect gameplay mechanics.

A lot of changes were made to the physics engine called Player Impact Engine, for the first time implemented in FIFA 12. The developers greatly improved the way defenders act in little space situations as well as their arms behavior in push-pull, and managed to eliminate graphical glitches connected with it. Considerable changes were also made in ball control - this time a much greater emphasis was put on receiving the ball. This action is now affected by a number of new factors, such as defense pressure, weather conditions, technical skills of the player, and others. Moreover, the developers introduced a range of new moves and first touch passes.

Attacking Intelligence module brings a lot of changes in offensive game style. Greater emphasis was put on use of free field (especially on the wings), which increased freedom of play. Moreover, the developers improved behavior of passive players who take part in an action - offensive players are able to focus defenders attention on themselves more often, allowing the player to easily create a shooting situation. Some cosmetic changes also affected dribbling - in FIFA 13 players can quickly change direction while sprinting, and it is now easier to escape from a defender covering players back.

New FIFA is also characterized by Tactical Free Kicks module that creates new possibilities in terms of taking free kicks - the third player appeared next to the ball, which allows marking the shot to confuse the opponent's defense. The introduced changes also allow you to limit the spectrum of shooting options for the opposing team - at any time, you can change the number of players in a wall, reduce its distance from the free kick or run out of it with an individual player. Moreover, in FIFA 13 defenders take an active part in stopping the ball that is heading toward an empty goal.

In FIFA 13 you will find a completely new game mode - Skill Games - in which you can test your skills in several diverse challenges for precision and accuracy of your plays. With it you can practice e.g. lob passes, free kicks, or cross passes across the pitch.

The developers also took care for introducing considerable changes in the structure of the career mode. For the first time in the series history you can choose to lead a national team, while serving as both a head coach and a club coach. The creators also updated the market prices of players in the transfer panel - moreover, there is a possibility to give one of your players for the player you want. The notification system was greatly expanded, to keep you updated with the most important information from the virtual world of football, as well as allow broader interaction with your players.

FIFA 13 saw significant improvements when it comes to referees - errors related to physics engine glitches were eliminated, and virtual referees tend to use the advantage rule more often. Defending your own goal is made easier thanks to improved control of the ball when it is leaving the field of play, which is now better covered by your defenders. New FIFA is also a new set of players reactions to scores, animations of shots and passes.