Hello Neighbor is an unusual first-person stealth game for PC, XONE and SWITCH. It was developed by Dynamix Pixels.

In Hello Neighbor, we assume the role of an ordinary inhabitant of a suburban house, who probably hasnt read Moby Dick, and starts to suspect that his neighbor holds some terrible secret. To confirm his suspicions, he decides to sneak into his neighbors cellar. It wont be an easy task since the man is very alert and, if provoked, will stop at nothing to neutralize any threat to his privacy.

Hello Neighbor for PC, XONE and SWITCH is a stealth action game. Its primary mechanic is the advanced artificial intelligence that lets the neighbor remember the players actions to foresee his future moves. Avoiding detection  essential to complete the game  thus becomes more complicated the more the player takes a similar path while trying to sneak past the neighbor. Frequently taken routs are quickly armed with traps (that prevent escape), obstacles (such as boards in windows), and alarms (like cameras placed here and there).

The player can use decoys to distract the neighbor and manipulate the environment in a way that makes detection harder for the antagonist. We can use many physical objects that can be interacted with, (for example, we can take the lightbulb from a lamp to prevent the neighbor from switching the light on), a loud TV or a radio, or even lure the neighbor into the traps that he set himself.

Hello Neighbor gives us access to modest inventory space where player can temporarily store important plot items such as keys. If detected, in order not to lose the valuable items, we have to run with these tools back to the protagonists house. Otherwise, apart from restarting a level, we lose all items weve collected.

Hello Neighbor for PC, XONE and SWITCH is powered by Unreal Engine 4. The developers created colorful cartoonish graphics which gives an interesting contrast with the gameplays disturbing atmosphere.

Hello Neighbor guide contains walkthrough and helpful tips. This game guide can help you deal with the mysterious neighbor and reach his deepest secret hidden in the basement. You will find here also information about keys (red, green and silver key). 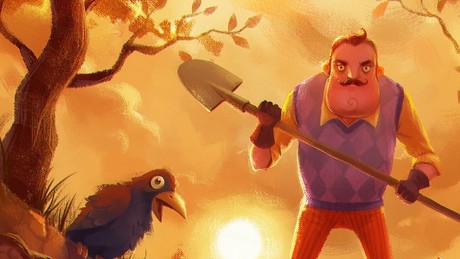 Lets take a peek at Hello Neighbor, an original indie stealth game by Dynamic Pixels. Does this unassuming game have a chance to take the players by surprise and totally outmaneuver their human intelligence?