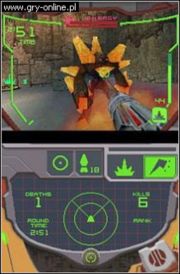 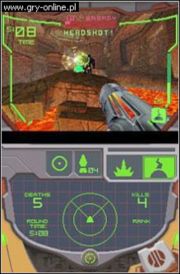 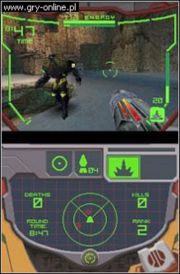 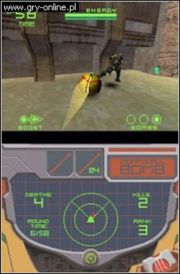 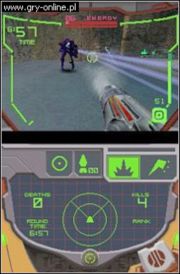 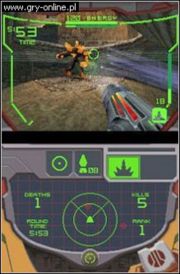 A mighty race, now extinct, has left behind relics of their once-powerful warrior culture. Now bounty hunters from across the galaxy are racing against each other to lay claim to these relics to harness their power for themselves.

* Compete in a series of action-packed arenas.

* Try out at least three modes of play, with gameplay features similar to Deathmatch and King of the Hill.

* Link wirelessly with up to three friends.

* Six new bounty hunters, including Noxus, Spire and Kanden, fight against Samus in both single-player and multiplayer modes.

* All hunters have their own unique back stories, weapons (from sniper beam to mortar to shotgun) and fighting styles (stealth, melee, sniper, etc.).

* Single-player details will be revealed at a later date.

In the most distant reaches of space, beyond the territories controlled by the Galactic Federation, is the Tetra Galaxy, once home to a mighty race known as the Alimbics. An advanced civilization, peaceful, prosperous and powerful, the Alimbics maintained stability over the region forcefully but judiciously. They reigned over a vast region known as the Alimbic Cluster. One day, perhaps thousands of years ago, perhaps tens of thousands, they simply disappeared, leaving behind artifacts, all scattered across the Alimbic Cluster, all protected by a lethal arsenal of the Alimbics most advanced weaponry.

Today, for the first time in centuries, the long-dormant Alimbic System is stirring, delivering strange tidings. A telepathic communiqué, originating in Alimbic Cluster, has downloaded into the brains of some of the most exceptional beings in our galaxy. The message translates into a thousand different languages on a thousand different worlds. But the message always is the same: The secret to ultimate power resides in the Alimbic Cluster.

This message has intrigued and enticed some of the most formidable bounty hunters in the galaxy to make the long journey to the Alimbic Cluster, each of these great warriors motivated by a different reason. Some desire power for themselves, or for their planet or people, while others simply have a relentless desire to hunt, or to kill, along with a fierce determination to prove themselves the best bounty hunter in the galaxy. Now, its a race against time to see which bounty hunter will triumph over the others, who will discover the secret behind this promise of ultimate power.

The Galactic Federation has heeded this strange, suspicious communication as well, and has called for the help of Samus Aran. Her mission: to discover the truth about this mysterious message, to protect against a potential threat, and to keep the Alimbics ultimate power from falling into the wrong hands.

Noxus is a member of the Vhozon, a proud and reclusive race that inhabits the outer rim of the galaxy. A spiritual being who walks a harsh, righteous path, Noxus has become a bounty hunter to administer justice to the galaxys criminals and evildoers, to keep the scales of order from tipping into instability and chaos. Noxus, like his many bounty hunter compatriots, got the message from the Alimbic Cluster about an opportunity to find a source of ultimate power. Hes determined to get to it first, to make sure it does not fall into the hands of lawbreakers or the unworthy.

Spire is the sole remaining Diamont, the last member of an ancient silicone-based race whose bodies are composed of organic rock. Spires life as a Bounty Hunter takes him from one end of the galaxy to the other, while he continually searches for some information on the location, or fate, of the rest of his people. When he receives a message from Alimbic Cluster, he races to that system with the hope that finding the Alimbics source of ultimate power and solving the mystery of their lost race will help him solve the mystery of his own.

A lab experiment gone awry, Kanden was created to be the ultimate soldier, immortal and unkillable. However, stress from the neural combat encoding sequences was more than Kandens still-mortal brain could handle, and left him ferocious, deadly and dangerously unpredictable. Kanden broke out of the lab, and those responsible for his neurological alterations and surgical enhancements were not left alive. Still, there is one way that a brutally efficient killer in the galaxy can not only survive, but thrive: as an intergalactic bounty hunter. Unbound by morals or a conscience, programmed with an instinctual drive to hunt  and kill  Kanden is one of the very best. When he gets a message of an ultimate weapon in the Alimbic System, Kanden knows that this is his chance to prove himself the finest bounty hunter of them all.

In multiplayer, compete against your friends in at least three different modes. Chose from Samus or any of the other six bounty hunters and find out who really is the best hunter in the galaxy.