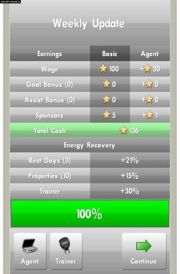 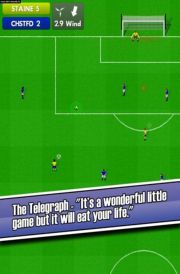 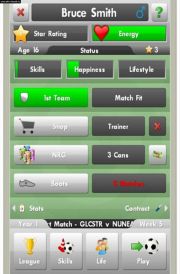 New Star Soccer, released on AND, iOS and WP, is an unusual sports game that combines arcade, RPG and strategy elements. The project was developed by New Star Games studio and it is available in a free-to-play model with microtransactions.

New Star Soccer is very different from typical soccer productions. We don't manage the whole club, but only the career of a single player. When we start the game, we create a player, then we have to get him to the top, and finally, send him for a well-deserved retirement.

The game is divided into two phases - matches and activities outside them. During the games, we follow the text description of what is happening on the pitch. We take control over the player only when our character has the ball - we use gestures to dribble, pass and shoot. The game offers a lot of freedom in this area, allowing us to determine such aspects as kick strength, angle and spin.

After the matches, the team coach evaluates our achievements - this affects his attitude towards us, as well as our contacts with other players and fans. Between games, we have to organize training sessions, manage salaries, employ agents and coaches and buy various items, clothes and real estate. It is also necessary to take care of personal life, which includes romances and contacts with the media. There is even the option of going to the casino full of mini-games.

A player's career is influenced by both his achievements on the pitch and what he does outside it. This is due to the fact that sponsorship contracts quickly begin to play a key role, as only they provide the resources needed for the best coaches, equipment and dietary supplements, as well as to make the player happy by taking care of his high living standards.