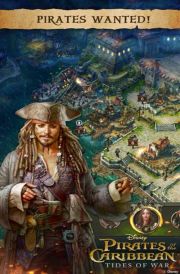 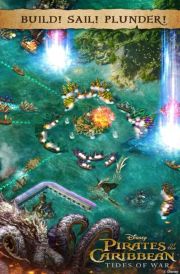 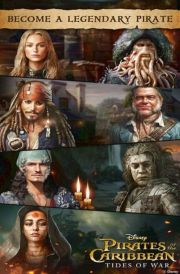 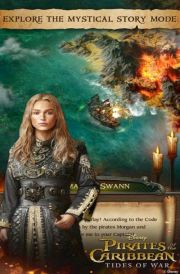 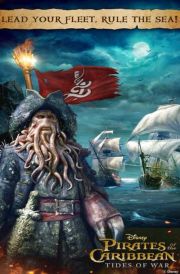 Pirates of the Caribbean: Tides of War is a AND and iOS release of a mobile strategy game. Tides of War, developed by Joy City, is available for free on the app store, however it features microtransactions.

In the game, based on the popular movie franchise, players get to assume the role of a ringleader in charge of a small pirate bay. In Tides of War the plot does not focus particularly on one specific movie, instead, it draws its inspirations from the entire franchise, allowing the players to meet many characters and visit some locations known from the silver screen.

The AND and iOS release of Pirates of the Caribbean: Tides of War is a real-time strategy game building on the aspect of naval battles. Player is assigned with the task to build his own fleet and recruit crews. The manned ships are then used to fight other pirates, as well as giant sea monsters, with each victory being rewarded with loot and treasure. The battle system implemented herein is relatively simple: what matters most is the appropriate choice and number of units, and not the tactical management during battles.

Players can choose the free play mode, where they can battle AI opponents as well as other players. One can also choose to play the story mode and jump right into adventures known from the movies and meet such characters as Jack Sparrow, Will Turner or Hector Barbossa.

The gameplay, however, is not limited to waging wars against other pirates. Another crucial aspect featured by the game is the implemented economy system. It requires players to manage their bays, erect new structures, upgrade the old ones, and keep the budget balanced in order to avoid the expenses exceeding the incomes. The game is enriched with special missions, completing which is awarded with some useful goods.

The game strongly focuses upon the online aspect, allowing players to form different alliances with other pirate leaders, which resembles guild systems known from other games.

Pirates of the Caribbean: Tides of War features 3D graphics with high-quality details.