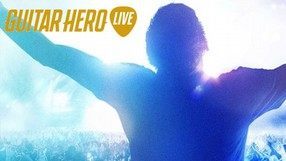 The next major installment in a bestselling music game series launched in 2005 by Harmonix studio, who are currently developing a similar series, Rock Band. Returning after a several-year long hiatus, this new installment was developed by FreeStyle Games, who previously created two DJ Hero games. Overall, the gameplay mechanics did not change much, however, this time the game features the view from the guitarist’s eyes, whereas cartoonish characters gave way to authentic musicians and crowds resembling real audience. Guitar Hero Live supports a new version of guitar controller with 6 buttons in two rows, imitating the real instrument even better. As always, the game lets you adjust difficulty level to your skills. Unfortunately, unlike rivaling Rock Band 4, Guitar Hero Live is not compatible with tracks purchased for previous games.

The third game from the popular series, designed exclusively for the Nintendo DS console. As usual, the game consists in imitating guitar playing in various famous music pieces.

Guitar Hero: On Tour Decades is another music game from the popular series. It is addressed to all rock lovers who want to feel like a real star.

Guitar Hero: On Tour is the first installment of the incredibly popular series that hit the portable console. The program, sold with a special overlay on the console, allows us to experience the pleasure of becoming a famous guitarist.

Guitar Hero: Rocks the 80s is another edition of the extremely popular product, which turned out to be Guitar Hero. Simple rules and a powerful dose of music attracted a lot of players to the console, allowing them to feel like real rock stars for at least a moment.

The second part of the best-selling series of music games, in which we play dozens of rock and metal hits with the use of a controller resembling a real guitar.

Guitar Hero is a representative of the genre of music games, in which the player's task is to press individual buttons at the right moment.