Guitar Hero Live on PS4, X360, etc. is the next installment of the famous Guitar Hero series of music games, started in 2005 by the Harmonix studio. It is also the franchise's return to the market after several years of absence. The title appeared with a new version of the guitar with six buttons in two rows. This controller allows you to better imitate the feeling of playing a real instrument, and in addition, it allows you to adjust the fun to the skills of different players - from beginners who use only three buttons to veterans who can perform complex combinations on all six buttons. The game was developed by FreeStyleGames studio, known from the DJ Hero series.

The gameplay itself doesn't differ diametrically from the earlier releases of Guitar Hero. We press the designated buttons a plastic guitar at the right moment when a note flying from above falls into one of the fields displayed on the screen. Unlike the previous parts, the action is presented from the perspective of a guitarist, and the virtual musicians and the audience have been replaced by real actors. Thanks to this, we have a greater impression of participating in the concert, which is further enhanced the behavior of fans affected by the way we play. If we do well, people jump, dance and cheer, but if we aren't doing good, their attitude changes for worse (whistles, buzzing, etc.).

The available songs include the Black Keys, Fall Out Boy, My Chemical Romance, Gary Clark, Jr., Green Day, Ed Sheeran, The War on Drugs, The Killers, Skrillex, The Rolling Stones, The Lumineers, Carrie Underwood, Pierce the Veil or Blitz Kids. The title, in contrast to the competitive game Rock Band 4, is not compatible with previously released songs. Instead, Activision has made available the GHTV online platform, which publishes official video clips of various performers, with the possibility of playing them.

Below is a full list of songs in Guitar Hero Live. 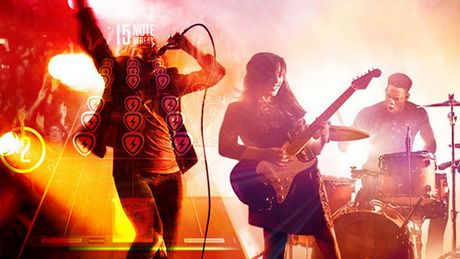