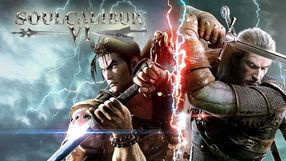 Three-dimensional beating, which originally debuted in 1998. Compared to the previous version of Soul Calibur has been enriched with a brand new high-resolution visual setting.

Soulcalibur II is the second installment of the highly popular series of skill fights, which dates back to the Sega DreamCast console. The player directs the actions of one of the heroes competing for the title artifact. Namco developers have prepared seven play modes, a rich collection of available weapons and equipment, as well as plenty of bonus surprises.