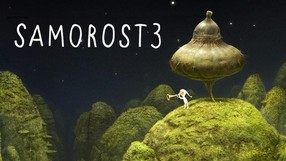 The third installment in a light-hearted adventure game series created by Czech developer Amanita Design, who also created such titles as Botanicula and Machinarium. Once again, you play as the little space gnome, who does not speak and communicates with the world solely by gestures and strange sounds. In terms of gameplay, Samorost 3 is a typical point-and-click adventure game that focuses on exploration of diversified locations and solving inventive logic puzzles. In contrast to its predecessors, which were very short and simple productions, the newest installment in the Samorost series is a full-fledged production offering several hours of gameplay. The game’s unquestionable strength are its audiovisuals. The graphics were created with a technique that combines photography and hand-drawn elements. The atmosphere is further enhanced by the soundtrack composed by Tomas Dvorak, known from previous productions by Amanita Design.

An original adventure game developed by studio Amanita Design. Samorost 2 is the sequel to one of the most interesting browser games of 2003. The player assumes the role of a likeable alien whose asteroid is visited by a pair of other aliens. The visitors steal fruits from the orchard and kidnap the dog that was guarding them. As one can guess, the player is tasked with freeing his pet and returning safely home. The game is a minimalistic point-and-click adventure game in which one won’t find expanded story, dialogues or the possibility to pick up items and control the movement of the protagonist. During the game player only visits locations filled with interactive objects and is tasked with manipulating them in such way so that the main character is able to get to the next level. In contrasts to its predecessor, Samorost 2 is a fully commercial game which offers longer play time and much higher quality.

A simplistic, two-dimensional adventure game based on the Flash technology and developed by Amanita Design - a Czech game-making studio. Anyone can play the game for free, using their internet browser. The player takes on the role of an alien inhabiting a huge root suspended in space. One day, he spots a gigantic asteroid heading towards him. He quickly makes his way to its surface, where his task is to find a way to change the asteroid's flight direction and save his home. It is a simplistic adventure game deprived of a typical player inventory for example. The player is not in full control of the protagonist's movements. Rather, the gameplay consists of a series of subsequent puzzles linked together by the storyline. The player's task is to make a good use of the objects displayed on the screen in order to access the next level. Samorost stands out with original visuals combining hand-drawn elements with adequately modified photographs.