The tenth installment in a series of Japanese action RPGs. In Ys X: Nordics Adol Christin finds himself in the far north, where he comes to face a new threat - the immortal undead known as Griegers.

Ys Memoire: The Oath in Felghana

Ys VIII: Lacrimosa of Dana is the eighth installment of the fantasy action RPG series from Nihon Falcom. The game takes place in the same Greek mythology-inspired fantasy world as the series' previous installments. Once again we play as the warrior called Adol Christin who, after the ship he was traveling went under, ends up with the rest of the crew on the cursed island Seiren. Our hero's dreams about the mysterious girl named Dana turn out to be the key to solving the mystery of the island. As per the series' tradition, we will spend most of our time on fighting with various enemies. The game features an arcade combat system. We are accompanied by many characters with different abilities in our adventures and we can switch between them anytime we want to. Every once in a while we will also play as the titular Dana. Her parts of the game are more riddle-oriented.

Mobile re-edition of a classic jRPG game and conversion of the second part of Ys Chronicles I & II set, initially released on the PSP console. Its story is a direct continuation to the events of first game of the series, with us once again taking role of red-haired warrior named Adol Christian. This time he is snatched by the mysterious light and sent, together with the magical books of Ys, into a mysterious floating island that suffers from the attacks of demons. His task will be to reveal the reason behind those assaults and find a way to stop them. In terms of game mechanics, Ys Chronicles II isn’t much different from its predecessor, except for the ability to cast spells and transform into a demon, allowing us to talk with every opponent that would attack us otherwise.

Mobile version of the first entry in the classic jRPG series, which originally debuted in 1987, and two decades later received a complete remake for PC and PlayStation Portable console. Ys Chronicles 1 takes us to a magical fantasy world, which we traverse as a young swordsman Adol Christin. He will be the one to save country of Esteria from an invasion of demons, and he must find six holy tomes to defeat the evil. Gameplay employs classic schemes of the jRPG genre, as we observe the world from a camera located behind our character’s head and explore the world, talk with NPCs, develop our hero and fight enemies. This last element is kind of unique, as we fight by initiating collisions with hostiles through a simple movement system. The effectiveness of those attacks depends mainly on which side of a target we hit.

Ys Seven is the seventh installment in the popular jRPG series developed by Nihon Falcom. The game takes us to the fantasy world of Altago where we play as adventurer Adol Christin. King Kiemarl Ednas gives our hero a task of exploring and inspecting a mysterious crypt that emerged after one of the earthquakes. While fulfilling his task he awakes the Five Dragons – ancient powerful beings that bestow Adol with their power so that he can stop the impending cataclysm. The gameplay focuses on exploration of various locations, combat, and conversations with NPCs in order to progress the story. In combat, we use conventional weapons, spells, and special abilities which we can combine into powerful combo attacks. We can assign attacks to specific buttons, just like in the series' previous installments. Ys Seven features an atmospheric soundtrack and eye-pleasing visuals.

Compilation of remakes of the first two installments of the Ys cycle, in which we play Adol Christina - a brave warrior trying to stop the invasion of demons and monsters. What distinguishes these titles from other Japanese RPGs is the combat system - during the game we do not have a separate attack command, and we attack enemies using a standard motion system, hitting them from different directions. 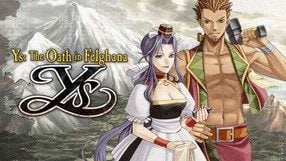 Ys: The Ark of Napishtim