Shelter 3 is the next installment in an unusual simulation cycle from Might and Delight, where players take on the role of wild animals and fight for survival. This time they're gonna have to play the elephant.

A bundle of two games by Might and Delight: the 2015 game Shelter 2 and Paws: A Shelter 2 Game released a year later. The collection also includes the soundtracks of both productions and interactive books - Fables from the Den and The Lonesome Fog.

An adventure online game in which the player takes on the role of an animal - a forest inhabitant. This is a spin-off of the Shelter series, telling the story of an animal caring for its offspring. The main aim of the game is the interaction between the players, who do not communicate with words, but only specially prepared emoticons, symbols and sounds. Areas can be travelled alone, but herd life is promoted by the game of discovering special areas and unblocking those inaccessible when travelling alone. The game is characterized by an idyllic, but rather austere style.

An action adventure game from Might and Delight studio, set in world created for the sandbox simulator, Shelter 2. It is a story of a young lynx and his bear companion, who venture through the vast and dangerous world searching for home. As far as game mechanics go, Paws: A Shelter 2 Game combines the unique features of the Shelter simulation series with adventure and platformer elements. Instead of sandbox freedom, the game offers a linear plotline and allows us to control two independent characters, who can cooperate to solve puzzles and avoid various traps. The game employs the same visual style as the original Shelter 2, although we observe game’s world from third-person perspective, and many features not present in the original title, like the ability to follow a trail using senses other than sight.

The second installment in a unique simulation game series, developed by an independent studio, Might and Delight. In contrast to the first installment, in which we played as a female badger, Shelter 2 gives us an opportunity to play as a pregnant female lynx. The game recreates the life of the species in its natural habitat. During the gameplay, the player has to ensure adequate conditions for the development of their offspring. One has to find a den, gather food and protect the offspring against natural threats. The gameplay is more complex this time, because different new elements were introduced, such as the stamina meter. Since the traits possessed by a lynx are different to those of a badgers, the gameplay mechanics are slightly different. Similarly to the first game, Shelter 2 greatly emphasizes the survival aspects and the bonds between the lynx and its offspring. The original "patchwork" graphics, based on somewhat old-fashioned vector models, were not changed. 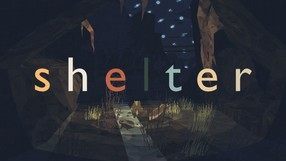 An original action adventure game with survival elements, developed by Might and Delight. The player controls a female badger trying to survive in a hostile environment with several offspring to feed. Shelter is a third-person perspective game. The player's mission is to find an appropriate den and ensure the safety of the badger family. The player has to provide basic living conditions for the small badgers. The world is full of dangers, however, such as environmental threats (fast-flowing rivers or steep slopes), or hunters and predators, against whom the female badger does not stand a chance. The creators put special emphasis on recreating the bonds existing between the mother badger and her cubs. The game features extremely original visuals that contribute to the game's unique experience.