Sniper Elite V2 Remastered is a remastered version of Sniper Elite V2, a game combining features of shooters and stealth games. The title was developed by the devs of the original, i.e. Rebellion.

The action of Sniper Elite V2 Remastered takes place in the last days of the Second World War, namely in 1945, in Berlin, stormed by the Red Army. We play as the American sniper Karl Fairburne, who finds himself in the ruined capital of the Third Reich, to stop the Soviet troops from laying their hands on V2 rockets. In order to do so, the protagonist must intercept scientists willing to cooperate with the Americans and liquidate those who chose to work with the Soviets.

In Sniper Elite V2 Remastered the action was shown from third-person perspective. A number of various missions await completion. The key to success is to avoid unnecessary confrontation with enemies, find a convenient position to shoot, and in case of detection - escape and wait for the alarm go die down or to eliminate the threat. Things are complicated by the fact that adversaries can communicate with each other or hide from the hero.

Although there is an extensive arsenal of firearms (including a silenced pistol) in the game, the leading role is played by the sniper rifle. In order to make the best use of its potential, we must not only show patience but also knowledge of ballistics; therefore, when aiming, we must take into account gravity and wind speed and control our pulse. At lower difficulty levels, a red dot shows where the projectile will hit. The "X-Ray Kill Cam" deserves a separate mention - when a shot is fired, the camera follows the bullet, showing the damage it causes in the bodies of enemies (such as torn organs or broken bones).

In addition to the single-player story campaign, Sniper Elite V2 Remastered offers a competitive multiplayer mode where up to sixteen players can compete against each other, as well as a co-op mode waiting to be tested.

Sniper Elite V2 Remastered stands out from the original thanks to improved visuals; moreover, the devs provide us with a photo mode. The game is enriched with the content of all expansions released after the original release; additionally, the game features playable characters from the spin-off called Sniper Elite: Nazi Zombie Army.

Rebellion has announced 4 games from the Sniper Elite series. the list includes: Sniper Elite V2 Remastered, Sniper 3 Ultimate Edition on Switch, a VR title and a new major installment of the series. Two of them will be available for sale later this year. 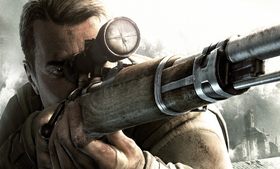 YouTube's PC Gaming Videos featured a video showing the differences between Sniper Elite V2 Remastered and the original version. If you are interested in how Rebellion's production has changed, you can read about it below.

The day of the premiere of Sniper Elite V2 Remastered has come. The game debuted on PC and consoles, and the first reviews do not give the devs any reasons to be satisfied.