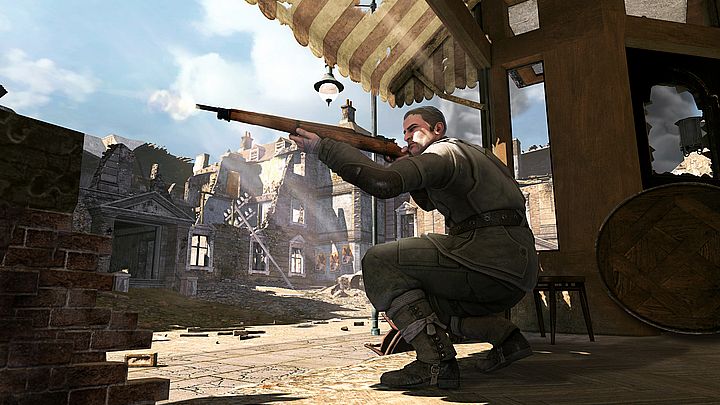 Sniper Elite V2 Remastered is only hours away from its release. The title will go to PC, Xbox One, PlayStation 4 and Nintendo Switch tomorrow. Many players wonder how the visuals have changed compared to the original. Let's recall that the Sniper Elite V2 has a reputation among those who prefer stealthy gameplay that enables them to exterminate enemies from a distance. PC Gaming Videos has uploaded a short video to YouTube that shows the differences between the original version and the remaster. The test was conducted on a PC. You can see the material below.

Sniper Elite V2 Remastered differs from the original in that it has a better blurring effect when moving. We can also observe improved models of rifles and the whole gear worn by the protagonist. The vegetation, which now reacts to the wind and interacts with the character, also looks much more natural. Shots from x-ray, a camera activated during exceptional hits, also look good.

Unfortunately, if you expected the remaster to enter the graphic level of the latest titles, you may be a bit disappointed. The production still maintains the graphics level as such (especially as the original version is "only" 7 years old), but the recently popular photorealism is still a long way off. Sniper Elite V2 Remastered definitely promises to be a position for new players, because the veterans of the cycle simply won't find much new in it. On Steam and consoles, the remaster costs less than $34.99, and if you have the original version, upgrading to the refreshed edition will cost you only $9.99.

Let us remind that this production is not the only game from the Sniper Elite series that Rebellion is currently working on. Sniper Elite III: Ultimate Edition is headed for Nintendo Switch, while players using VR equipment will receive Sniper Elite VR. Much is also said about the next major installment of the series, which is in production. Unfortunately, we will probably have to wait until 2020 for the first concrete results.