Star Wars: The Old Republic - Onslaught is the seventh large add-on, designed for MMORPG Star Wars: The Old Republic, which was originally released on PCs in December 2011. The expansion was created by the developers from BioWare studio, known for working on such series as Baldur's Gate, Dragon Age, and Mass Effect. Onslaught was announced in April 2019 at the Star Wars Celebration in Chicago.

Star Wars: The Old Republic - Onslaught depicts the war between the Galactic Republic and the Sith Empire, which erupted with new force, plunging the entire galaxy back into chaos. The story focuses on a forest planet called Onderon, whose newly elected king must decide the future of his alliance with the Republic, which could affect the fate of the conflict. During the campaign, players also visit the Mek-sha space smugglers' base and return to Corellia, desperately defending themselves against the Sith forces.

With this add-on, players receive another playable race (Nautolan), as well as an increased level cap. They can also take part in a new raid on the moon of Onderon, as well as participate in other previously unavailable events. They also get a chance to acquire tactical equipment that allows them to change their hero's abilities. 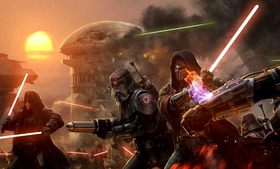