Virginia is an adventure game, created for PC, PS4 and XONE. The game was developed by an independent studio Variable State.

We assume the role of a female FBI agent, having only recently started service. Joined by a partner, we visit a drowsy city, to investigate a case of a young boys disappearance. The titular state of Virginia has been presented in a fictional version, full of subtle supernatural occurrences, and light science-fiction threads. The developers do not try to hide their inspiration: TV shows from the 90s, including Twin Peaks.

Virginia, released on PC, PS4 and XONE, is a narrative-driven adventure, so it mainly focuses on telling a story, rather than solving riddles. Making difficult moral choices with different outcomes is also not a part of this production. The developers had one, exact story to tell, and wanted to achieve their goal in the most spectacular way possible.

We observe in the events from the position of the female protagonist, but the whole process plays out in a rather unusual way. Variable States developers went for a more cinematic way of conducting narration, placing a special emphasis on montage, which results in many cinematic shots. The other solution rarely observed in this genre is lack of dialogue. The scenes begin once the conversation had ended, or conclude before a conversation begins. At the same time, such solutions give the game a very strange and eerie atmosphere, as wherever our character goes, all we hear is dead silence.

Virginia for PC, PS4 and XONE has been created in full 3D. The authors used an unusual visual style, with simplified objects and a dark palette, which results in a look imitating a grim comic.

The Virginia game guide features a large set of clues and tips as well as a very detailed walkthrough with information on all collectibles. This will allow you to complete the game in 100% and unlock all of the Steam achievements. 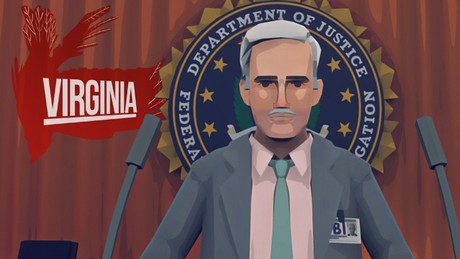 Made with a cinematic flair, Virginia tells a subtly emotional story with image alone. This game is trying to push the envelope when it comes to the limits of walking simulators while creating an eerie atmosphere reminiscent of Twin Peaks or The X-Files.

Virginia - an interactive thriller inspired by the cult TV show Twin Peaks - has just got a new trailer. The video gives a taste of the game's unique art style and music.

Virginia, a first-person, Twin Peaks-inspired interactive thriller developed by Variable State, will be out on Steam, PlayStation 4, and Xbox One September 22. With the games launch drawing near, a playable PC demo has been released.