A day before the release of Anthem, the Internet features enough reviews for us to gauge, whether BioWare delivered a hit to match their a previous works. The current Metacritic score of the PC version is 67%, which is unlikely to be a result both the creators and Electronic Arts had hoped for.

It is worth noting, however, that most of the editors are still in the process of reviewing, so the list below is not entirely reliable.

Let's have a look at the first scores and review the most important pros and cons discovered by reviewers. 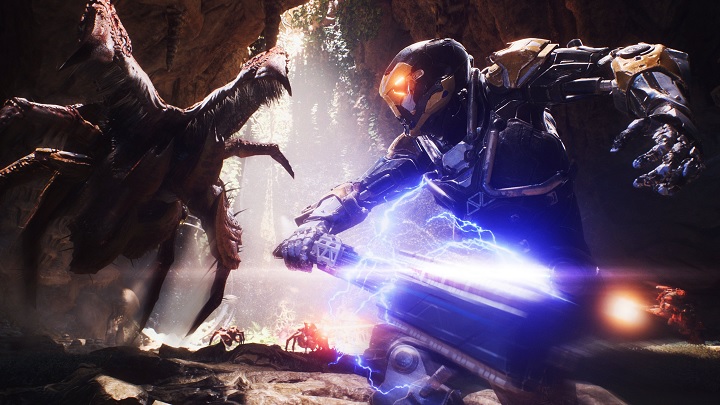 Let's start with the fact that Anthem's plot is a mess. The story is not very interesting, just like the main character and many NPCs they encounter (they might as well be made out of cardboard), and the choices we face do not compel us to think. Unlike in previous BioWare games, the story is clearly not a priority here. The technical layer is not worthy of praise either, with too many and long loading screens, network problems and other bugs troubling the project (it is worth remembering, however, that many of them will be dealt with by the day one patch).

However, we like the combat system and the flight mechanics, which make us feel like an Iron Man (the Javelins' diversity and vast customization options should be considered a plus). However, the spell is broken when we realize that our sky acrobatics are restricted by the limitations of our armor, after some time the battles become repetitive and boring (even though, according to some reviewers, the boss battles were creative), and the tasks we are facing are bland and fail to be memorable. Among the unquestionable advantages of the game is the graphic design, which presents the highest level; what is interesting, the PC version of the game looks good even on low settings.

Some people notice that Anthem is designed to grow and evolve over time, which allows us to hope that one day it will become a really great production. According to the majority of reviewers, there is little greatness in it at the moment. As you can read in a review on VG247 (without a final score at the moment), Anthem is "a hollow experience thats been designed to appeal to the widest market possible while squeezing more money out of those who are hooked in by its doggy treat design."

Let's remind that Anthem is coming to PC, PlayStation 4 and Xbox One tomorrow (i.e. February 22).