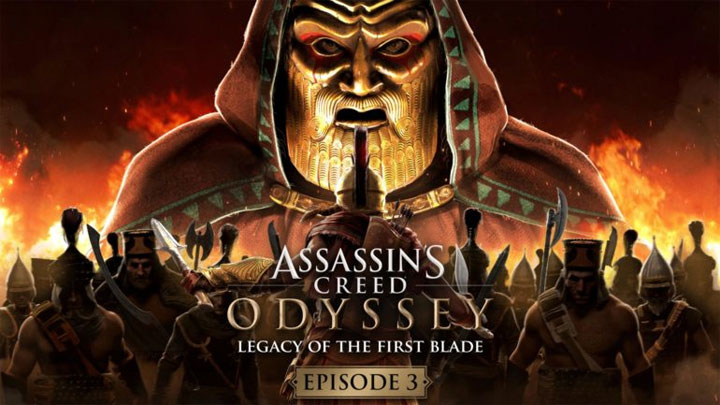 The episode crowns the story of the Legacy of the First Blade DLC.
ASSASSIN'S CREED ODYSSEY IN A NUTSHELL:

Fans of Assassin's Creed Odyssey have finally seen the release of the third episode of Bloodline, the third and final episode of the Legacy of the First Blade expansion. The DLC hit PCs, as well as PlayStation 4 and Xbox One consoles.

Bloodline cannot be bought separately. The episode is only available within the DLC, along with its previous parts, titled Hunted and Shadow Heritage. The add-on was also made available to people with a season pass and those who bought the golden edition of the game.

In Bloodline the player must join forces with Darius, forgetting their differences. Together they will face the Ancient Order, and we will learn about the history that contributed to the formation of the Assassin Brotherhood.

It is worth noting that Legacy of the First Blade is not the only planned paid DLC to Assassin's Creed Odyssey. The second DLC will be The Fate of Atlantis and it will also be divided into three episodes, the first of which will be released in spring this year. In the expansion we will go to the eponymous sunken city, where we will face mythical creatures and learn new facts about the first civilization.

In addition to Legacy of the First Blade and The Fate of Atlantis, the game's season pass also includes Assassin's Creed III Remastered, the refreshed version of the third installment of the cycle. The production will debut on March 29 this year.

Assassin's Creed Odyssey was released on October 5 last year, in PC, Xbox One and PlayStation 4 versions. In Japan, the game also went to Nintendo Switch thanks to streaming technology. In addition to the paid DLC, the title is also developed by means of free updates, introducing additional missions and options. The most recent update was the patch 1.1.4, which offered, among others, the New Game Plus mode.