The Assassin's Creed series has been on the market for about fifteen years. It's both a lot of time and not that much - Gears of War, a series that is year older series, has only received five full-fledged games. Meanwhile, Ubisoft has released twelve - not counting the released and leaked spin-offs - and more are on the way.

After nine relatively similar games - that have still managed to deviate from the basic formula like Black Flag - Ubisoft decided to do something different. As a result, AC: Origins focused more on RPG elements than on the pure action - an approach that was in some way inspired by the success of The Witcher 3.

Valhalla is the biggest? Not necessarily

The next hits of the Assassin's Creed series, Odyssey and Valhalla, went even further in this direction. At the same time, both titles have clearly grown in size - they received so much content (even compared to the not-so-small Origins) that doing everything in them has become a bit tiring. I know what I'm talking about - I completed AC: Odyssey in 100%, including the DLC. Never again!

Since Odyssey is bigger than Origins, the size of Valhalla should be much bigger than the adventure set in ancient Greece (and the several mythological lands). After the release of Dawn of Ragnarok, the third DLC for the latest installment of the series, that is true - we have shown this in the graphic below. However, there are still elements where AC: Odyssey dominates. 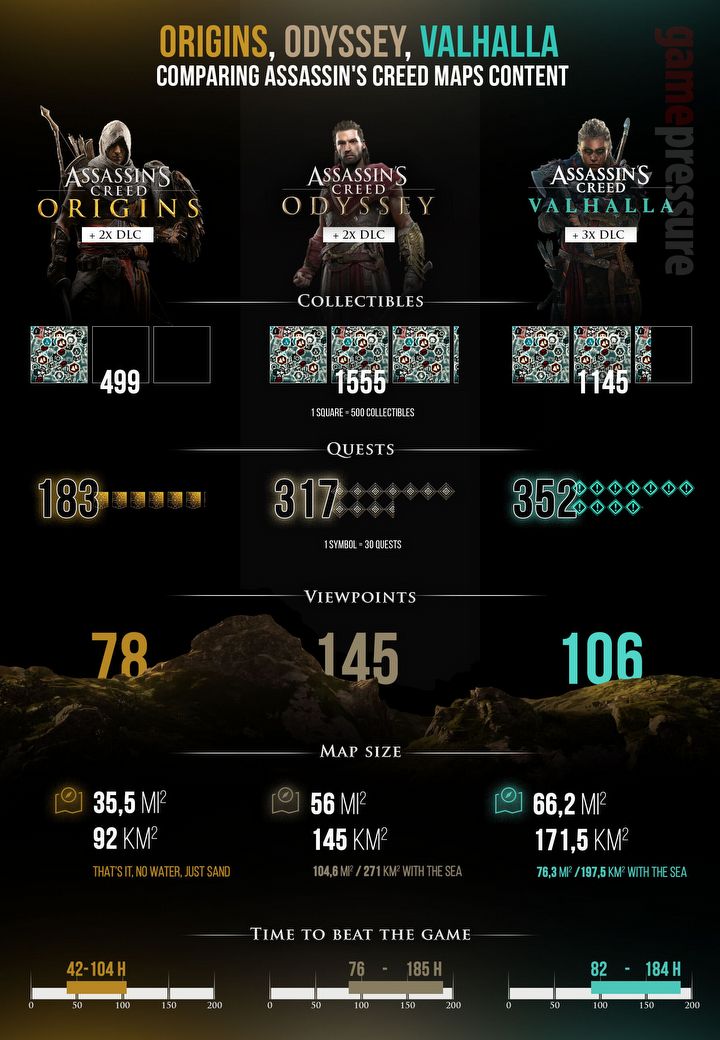 These are primarily collectibles and vantage points. Despite of the smaller number of expansions (although we included the Korfu island), Odyssey has more of them than Valhalla. This is due to the fact that, apparently, Ubisoft has realized that they went a little too far the previous time with making the world of ancient Greece too fragmented. England, Norway and the lands of Norse mythology are still full of collectibles and activities, but the developer had to put a little more effort into designing them, and the player - to collect/perform them.

This corresponds to the size of the map, which would be slightly larger in Odyssey, without counting the previously mentioned Dawn Of Ragnarok... though it is still larger, if we include the relatively empty area covered by the sea. Interestingly, the time it takes players to do everything in AC: Oyssey and AC: Valhalla is quite similar (data from HowLongToBeat.com) - remember that the latter game has more DLC and quests.

Want to know what are the quests in Assassin's Creed Valhalla and how to do them? You will find their walkthroughs in our guide.

Quality over quantity, but the game is still huge

This is another proof of how stretched the world in Odyssey was. To the extent that Assassin's Creed: Origins with its "modest" 183 quests (number provided by Ubisoft) seems small. It turns out that Valhalla is not the biggest of the recent AC games.