You want it darker, we kill the flame  you can hear Leonard Cohen singing in the recent Assassins Creed Origins trailer from gamescom 2017. It appears that Ubisoft has taken those words seriously and made the upcoming Egyptian installment the darkest one in the series. Thats something we can tell from the ESRB description of the game. While the M rating for Assassins Creed: Origins may not be surprising for fans of the franchise  all core Assassins Creed games were M-rated too  the products description reveals that it is going to be significantly more explicit than before. 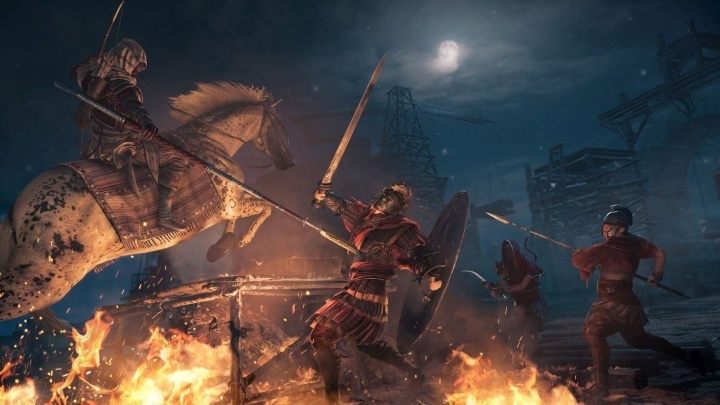 I didn't know I had permission to murder and to maim

For starters, ESRB tagged Assassins Creed Origins for Blood and Gore (only Assassins Creed: Unity had that before), Intense Violence, Sexual Content, Nudity (thats new to the series), Strong Language, Drug Reference, and Use of Alcohol. Apart from usual Assassins Creed type of violence, ESRB mentions some intense scenes, such as a man beaten to death with an orb, a child getting stabbed, human body parts and blood in a cave, or a headless corpse impaled on a stake. As for sexual content, heres an excerpt from ESRBs description:

The game includes a mission involving prostitutes and a brothel in which a couple can be partially observed having sex (i.e., moaning sounds). Female characters are sometimes depicted topless in the brothel; some rooms contain drawings of figures engaged in various sex acts.

As you can see, the Assassins Creed series is growing up and embracing more and more mature themes. How will it work for this next game? Were going to find on October 27, 2017, when Assassins Creed Origins comes out for PC, Xbox One, and PlayStation 4.