The successful launch of Back 4 Blood is behind us - the game was to the liking of both players and most reviewers. There is a fly in the ointment, though - a post by... KFC Gaming. The posted pointed out too many similarities to Left 4 Dead. KFC Gaming's twitter account unflatteringly compared Turtle Rock Studios' latest work to the long-running hit, apparently unaware that the same team also created Left 4 Dead, when they used to be called Valve South. 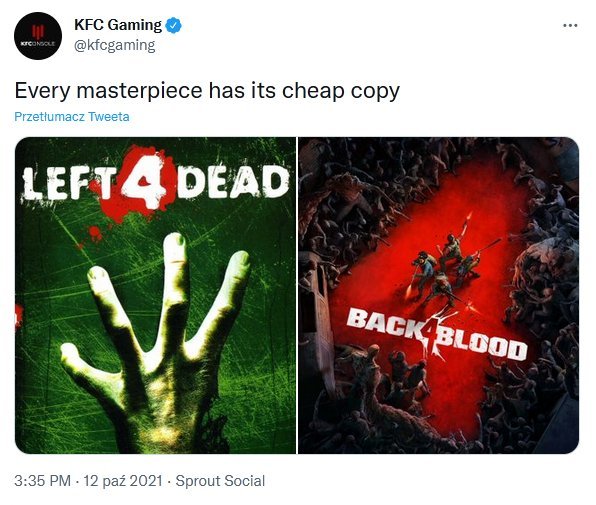 Developers of Back 4 Blood were soon there with a comback: "11 herbs and spices and still no flavor". Unexpectedly, they were backed by Obsidian, which accurately pointed out KFC's hypocrisy - the chain's popular chicken sandwich is based on a similar snack from American fast-food chain Popeyes.

KFC has a track record of playing some rather absurd games to promote the company's brand and products. In 2015, the now-defunct colonelsanders.com website published an 8-bit-style online game in which the player, as Colonel Sanders, fist-fighted in court or rescued jumping toddlers... Anyway, here's some gameplay from ColonelQuest:

In 2019, KFC released the free gameI Love You, Colonel Sanders! A Finger Lickin' Good Dating Simulator on Steam, which is a combination of a dating simulator and a visual novel.

A year later, the KFConsole was officially announced, - an original console (or rather, a mini-computer in a specially designed case) and food warmer in one... The device is to be developed in collaboration with Asus, Cooler Master and Seagate.