Less than two weeks remain until the release of Baldurs Gate: Siege of Dragonspear on March 31, 2016. No wonder fans get excited about new materials from the add-on. Now, courtesy of Gamespot, the games opening cut-scene has been revealed. Apart from the introduction to Siege of Dragonspears story, the above video features several fragments of actual gameplay, ending in a full-scale battle.

In this major expansion to Baldur's Gate: Enhanced Edition, the players are faced with a new danger  an evil crusade marching from the north, led by a charismatic female warrior called Shining Lady, rumored to be another Bhaalspawn. The ultimate confrontation is to take place in the titular stronghold of Dragonspear, standing over a portal to the Nine Hells, which once was used to unleash an invasion of demons upon the Sword Coast. 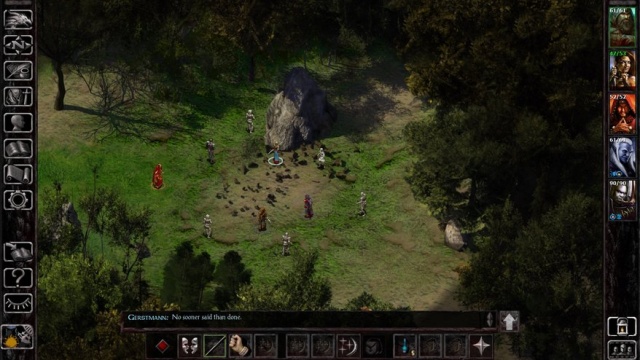 Siege of Dragonspear runs on Infinite Engine  an old technology which received some tweaks.

Siege of Dragonspear will introduce four new companions and another playable character class  the shaman  as well as the Story Mode difficulty level. Players will be able to complete the main story campaign in co-op for up to six people playing together regardless of the platform they use (PC, Android, iOS). You can pre-order the game on Beamdogs official website.