Over four years have passed since the announcement of Beyond Good and Evil 2. Soon after, we had the opportunity to see the first gameplays and learn many details about the game. In 2019, the developers suddenly fell silent, and gamers had to settle for residual rumors, concept arts and leaks.

However, we know that the game will not be abandoned. Ubisoft is still recruiting new members of the team working on the title. Among the hundreds of job offers published by the French company there is a possibility to apply for the position of 3D programmer. In the description of the offer we read that the person who passes the recruitment process, will be working on Beyond Good and Evil 2. 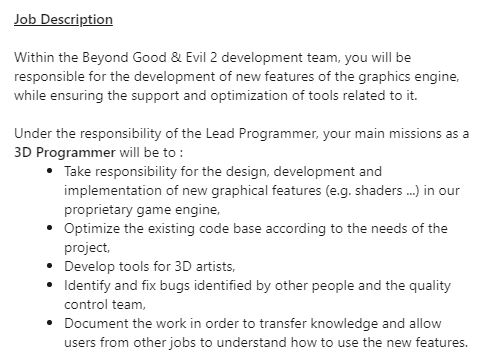 Unfortunately, it's hard to deduce anything from this offer except confirmation that the game is indeed being created. None of the information provided in it gives clues as to the game's possible release date. It's also hard to tell at what stage the work on the game is. Beyond Good and Evil 2 may have undergone many radical changes after 2017.

Frederick Duguet, Ubisoft's CFO, when asked if we can expect the game's release in 2023/2024, replied that work on the title is heading in the right direction. At some point we will probably see the debut of this imagination-stirring title. We just have to be patient.

Rust and War Thunder With Steam Deck Support; PUBG and DayZ Not So Much