The release of the long-awaited Call of Duty: Modern Warfare 2 is fast approaching. But before that happens, impatient gamers - thanks to beta testing - got a chance to get an early look at the next installment of Activision Blizzard's iconic series.

From September 22nd to 26th, the second round of testing is underway in MW2 - Xbox and PC users joined the fun with PlayStation console owners.. Admittedly, there would be nothing surprising about this, were it not for the fact that the it only took a few hours for the gaming community to start complaining about cheaters using wallhacks, among other things.. As a result, many console gamers, turn off cross-platform play to avoid the PC - the platform that is considered the most problematic (via Eurogamer).

To prove that these are not just empty words, we provide a sample video showing the problem (the web is teeming with such materials).

This is interesting because in Call of Duty: Modern Warfare 2 anti-cheat was introduced at the game's kernel level, but as you can see, even in this situation there are cheaters who skillfully circumvent it.

It is worth adding that the problems mentioned are so significant that Infinity Ward has spoken out on the issue and promised to tackle the problem. 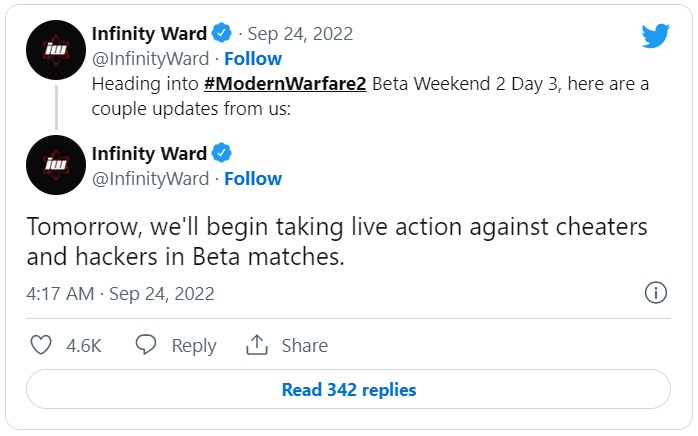 Finally, let us remind you that Call of Duty: Modern Warfare 2 will debut on October 28, this year, on PC, PlayStation 4, Xbox One, PlayStation 5 and Xbox Series X/S.