A few days ago we informed about the fact that Blizzard - in response to questions and impatience of players - assured the Diablo community that it plans to release major updates for the second and third installment in the near future. Unfortunately, at that time we did not know too many details about the patches - these were to appear in the coming weeks.

And so, as promised, community manager of Diablo, Adam "PezRadar" Fletcher, shared key information - at least in the context of Resurrected. The post published on Twitter revealed that next week an update to the revamped Diablo 2 will appear on the PTR (public test server).

Fletcher added that special emphasis during testing will be placed on testing new runic words in the game. For the less initiated - Diablo 2: Resurrected features combinations of runes, which, placed in our gear, provide it with special properties. 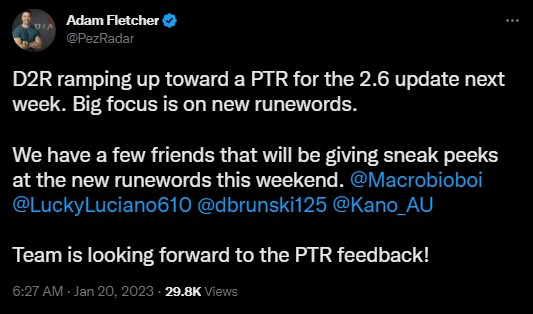 Now that we've gotten the first details on the content of patch 2.6 for Diablo 2, we may also soon receive information about the update for the third installment.

Halo Devs Denounce Rumors of Being Taken Off the Series; Fans Disappointed