Konami's decision to remake the eFootball series (formerly Pro Evolution Soccer) into a free-to-play title has been received with mixed - to put it mildly - feelings by virtual football fans. At least, that was the case before yesterday's launch, because from the very beginning eFootball 2022 became... one of the worst rated games on Steam.

It was foreseeable that many Internet users would follow the "glorious" example of those who enjoy the so-called review bombing, often without any relation to the game's actual quality. While this has certainly happened, it's impossible to explain a game's current rating on Steam by this phenomenon alone. eFootball 2022 was positively reviewed by only 8% of the platform's users.

It is fair to say that this is not the worst result to be found on Valve's platform, for there are productions without a single positive review. The thing is that these titles did not receive many ratings at all and they were independent "gems" from teams that - let's be honest - for most players practically do not exist. Meanwhile, the new former PES was rated not by 14, not by 100, but by more than 2.2 thousand users on Steam. No other production with so many opinions was received so badly by the community, not even the "legendary" Sacred 3 or "hits" like Flatout 3, GASP or Command & Conquer 4: Tiberian Twilight. 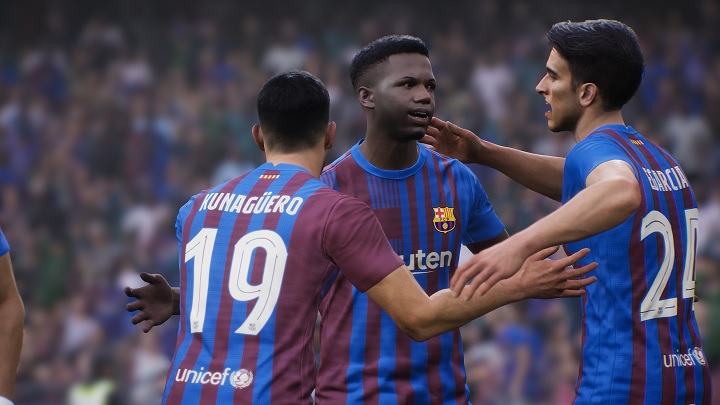 A year off and a new generation of consoles didn't help Konami's football series.

What made eFootball 2022 so bad that - as the author of one of the most popular opinions stated - Steam should introduce a "refund option for free games", and that the title is said to be more of a "psychological horror" than a virtual football? Well, the list of accusations is long, especially if you believe the most critical reviews on Steam. Players aren't thrilled with the revamped engine, whose "freshness" doesn't come in the form of improvements to the game's performance (virtually absent, according to many), but in the disastrous backgrounds, blurry graphics straight out of budget smartphone games (the only available resolutions are 720p and 900p), poor optimization, etc.

Unfortunately, the accusations do not end with criticism of graphics. Controls have been described as "sluggish and poorly responsive ". Changing players, passing, defending - you could list any number of mechanics and it would turn out that not one of them appealed to players. Add to this a very modest content, having more in common with a demo version than a full-fledged production, and - how else - a ton of bugs and glitches.

What's probably the worst, though, is that the players are simply disappointed. It should be remembered that a year ago we did not receive a full-fledged installment, but only a seasonal update, because - as Konami explained - the creators wanted to focus on delivering a truly nextgen version in 2021. The fact that this break resulted in a production that looks like a mobile title (and not particularly polished one), only deepened the disappointment.

It should be noted, however, that, first of all, a large part of the negative (and therefore all) reviews were issued by people who have spent less than hour playing eFootball 2022. Secondly, complaints about the scarce content are out of place, since Konami has long stressed that only part of the game will be ready for launch. In early September, the creators published a development roadmap. Thirdly, we've seen some praise here and there, even from users who have criticised the game - be it for the soundtrack, the interface or the potentially better movement and shooting systems (both of which need some polishing up, though). There were also compliments aimed at matchmaking.

However, not all the accusations fired at eFootball 2022 and even the more conservative reviews leave no doubt that the developers need to work hard to improve the game. A similar lack of enthusiasm can be seen on Reddit.