The court battle between Apple and Epic Games that started a year ago has finally come to a conclusion. The judge was to decide the fate of the 30% commission charged by the former, as well as its allegedly monopolistic and anti-competitive actions, as a result of which App Store did not allow apps that would enable purchases avoiding the store's payment system. The California court has ruled that the latter restriction will be permanently lifted. What follows is that Fortnite and it's in-game currency (the so-called V-Bucks) - which sparked the conflict - will in theory be able to make a comeback on iOS devices. In practice, this must be agreed to by Apple and wanted by Epic Games, and Tim Sweeney has already announced that this will only happen if payments in Fortnite can be made "in fair competition to the charges made by the App Store".

The judge presiding over the case, Yvonne Gonzalez-Rogers did not grant the other nine demands of Epic. Thus, Apple was not defined as a monopolist, although the fact that the aforementioned injunction was issued suggests that at least some of its actions were considered anti-competitive. Moreover, the judgment did not, even remotely, address the 30% revenue share charged by the company from Cupertino. Instead, it clarified which external links or buttons can be used by developers in their apps.

In addition, judge Gonzalez-Rogers ruled that by introducing the option to make purchases avoiding the App Store's payment system to Fortnite, Epic Games violated the terms of service implemented by Apple. As a result, Epic will have to pay the rival corporation 30% of all revenues generated through the system, which is more than 3.5 million dollars.

The order of the Californian court will come into force in 90 days, namely on December 9, 2021. However, there is a possibility that it will be blocked by a higher court, which will reconsider the entire case. Tim Sweeney has already announced that Epic will loedge na appeal. So as Jason Schreier wrote on Twitter: 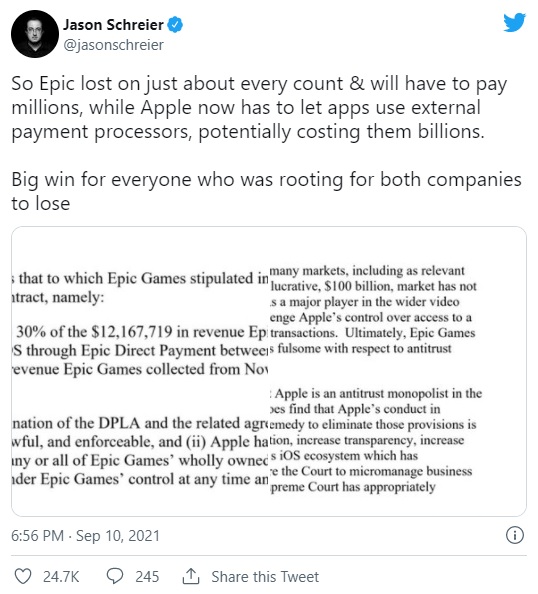 „The Magic of WoW Kinda Died,” Says Record-breaking Guild and Quits the Game

Saints Row Reboot to Have Richest Customization in the Series' History

PlayStation Showcase Trailers With Millions of Views; Which One has the Most?

Steam Makes it Easier to Download and Manage Games

Pathfinder: Wrath of the Righteous With Great Sales After First Week

Saints Row Reboot to Have Richest Customization in the Series' History

„The Magic of WoW Kinda Died,” Says Record-breaking Guild and Quits the Game